Thames (NZ): Did your Thamesites get a mention in the Police Gazette?

Thanks to Tom for the alert on the online availability of the New Zealand Police Gazettes.

The New Zealand Police Gazette 1877 to 1945 is available at Papers Past, thanks to the National Library of New Zealand, Te Puna Matauranga O Aotearoa.
"Like its predecessors, the New Zealand Police Gazette was a working tool for the police. It contained descriptions of crimes, wanted offenders, missing people, deserters, stolen items, and lost and found property, as well as notices about police appointments or promotions. It also published reports of discharged prisoners which, as well as listing the prisoner’s name, offence, date and place of trial, and sentence, included information about their occupation, height, eye and hair colour. From 1905 until 1917, relevant law reports were also included – after that the law reports were published as a separate title."

Criminal Events at The Thames:

The reports and notices are numerous regarding criminal investigations and convictions on the goldfield. The stealing of specimens one of the most common. In 1877, from a mine on the Moanataiari Spur 14lbs of quartz specimens were stolen. They belonged to the mining party led by John Brett. The report below named Richard Owsley as the one under suspicion for the robbery.

The following year in 1878, Thomas Crawford's house was broken into - 35lbs of auriferous quartz was stolen. This was the property of the Cure Gold Mining Company. (notice below)

In other situations the theft was of money or valuables - stolen from residences or business premises. Such was the case in 1880 when money was stolen from a bedroom at the nearby Pioneer Hotel at Hikutaia. John Wilson had six pounds stolen. The person under suspicion was Thomas Richmond, who had occupied the same bedroom.  (notice below)

These gazettes played a vital role in spreading the information to the Police throughout New Zealand. The cases are varied, the information supplied limitless for the researcher. Below is the case of Richard Barton stealing from the store of Samuel Webb at Tairua. Barton also known as Kilkenny Dick, came to Grahamstown to sell some of the items he had allegedly stolen from Webb.  (notice below) 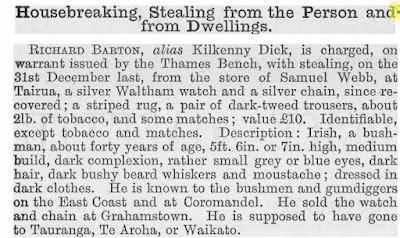 Checking for Names you may be researching

Using the search box, you can enter names or events and see what the results are. Relevant or not.
I entered "Cornes" and some interesting results came up.
The extent of information is amazing from "Warrants for Arrest" to general notices regarding 'charges' and convictions.

From the above information I can see my Great Grandfather was convicted at Te Aroha on a charge of Breach of his Prohibition Order. What is more amazing is that a description is included: Born 1868, 5 Foot 81/2 inches tall. dark complexion, dark hair, blue eyes, medium nose.

Mugshots in the Police Gazettes

"Mugshots had been taken by the New Zealand police since 1886, and from 1903 the police formalised the systems for recording information about criminals, which included compulsory fingerprinting and photographs. The first photograph to be included in the Police Gazette was published in the issue of 20 April 1904. It was a mugshot of John McKenzie, (real name James Ellis), who was wanted for the murder of Leonard Collinson. McKenzie was finally caught in December, and found guilty at his trial the following year and sentenced to death." Source: Papers Past 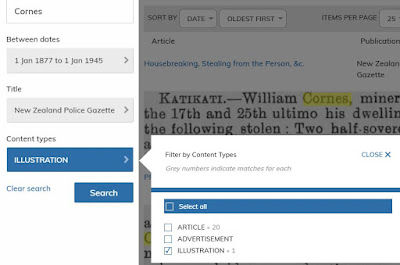 To look for illustrations only, refine your search and select: Content Types and tick ILLUSTRATION. The photo on the right is a sample of the refinement of the search that is possible.

There are many photographs / mugshots of men and women. I don't feel comfortable posting them here, but they would certainly make a great addition to family genealogy research.

The gazettes record changing attitudes to crime, when read in the context of today. For example, there are sad cases of people being charged over attempted suicides.

If you have a police member amongst your family, you can find information on appointments and transfers.

There are general notices, for instance when the Thames Orphanage was proclaimed an Industrial School in 1880. (notice below) 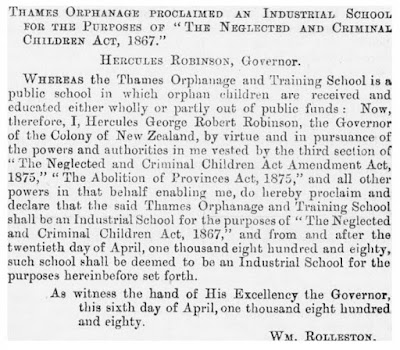 CLOSING REMARKS
Have a search for your family members, businesses they may have operated, or other events on the Thames Goldfield. You may be surprised by what you find.
Posted by Althea at 8:10 PM