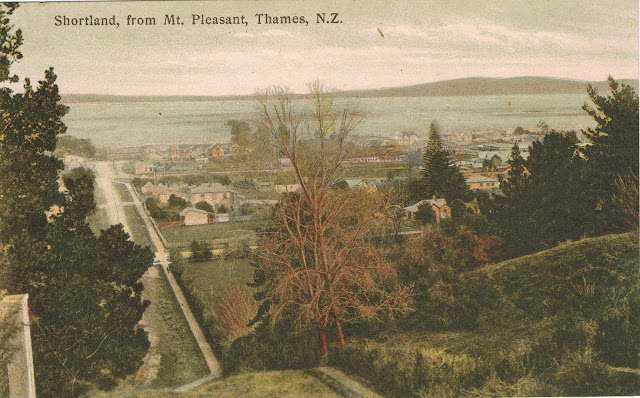 Before the steps
One of the earliest photos of Grey Street was taken c1868, and allows us to view the ‘street’ that is now Jacob’s Ladder. It is evident that people, animals and carts had been negotiating the track, winding back and forth to try and make the journey easier. When the streets of Thames were laid out in 1867, it was envisaged that Grey Street would extend from the flat to the hills in the east. 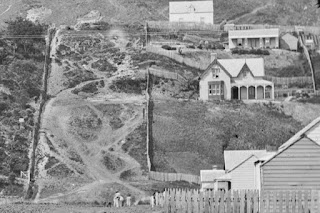 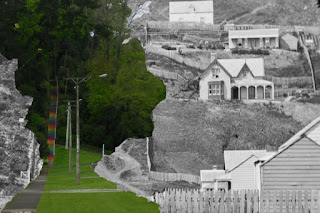 The 1868 section of Grey Street that lead to Mount Pleasant on the left.
On the right, the area where the concrete steps are located, surrounded by trees (aka Jacob's Ladder).

Why was the track /steps called Jacob's Ladder?
Jacob’s Ladder is a term that is often used for steep steps in other parts of New Zealand. Even at Thames another reference is found to steps at Tararu. A report on the Tararu Gardens in 1878 mentions, “The zig-zags, Jacob’s Ladder, the pagoda, and the swings, besides the walks by the fountains, were the favourite resorts of pleasure seekers in this cool retreat.”

When was Jacob's Ladder constructed?
By 1884 the residents of Mount Pleasant had made a series of steps on three sides of the hill.

In 1907 the County Council ruled that horses and cattle could no longer go up or down “Jacob’s Ladder.” This was due to the state of the road “It is over your boot-tops in mud.” Cattle-stops were installed at the steps around the town to prevent this continuing. Also Jacob’s Ladder was re-pegged and re-gravelled.

Over the years the structure of the steps proved a problem against the elements, with dirt and gravel constantly being washed away. An advancement came when Jacobs Ladder and the Edward Street steps were concreted - along with other steps around the town. More on those in another blog!!

When were they painted?
In 2014-15 the steps were given a new lease of life by the pupils of nearby Thames South School. The school has long used the steps as part of their sports programme and a new initiative saw pupils undertake a project in conjunction with TCDC to paint the steps. Today they stand impressively leading to Mount Pleasant and are safer due to the painting and handrail. 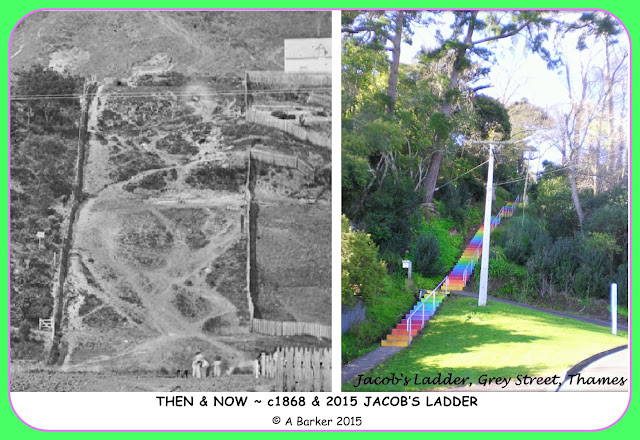 Background: Streets of Thames by A Barker
Posted by Althea at 9:36 PM