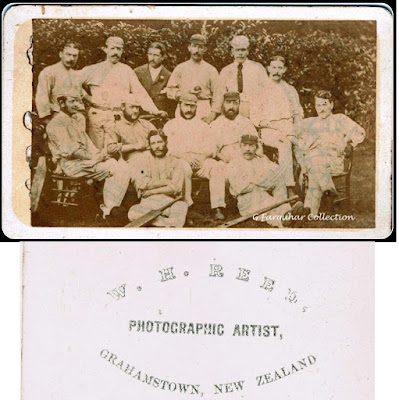 Its not everyday one comes across a photograph from early Thames, so imagine my delight in being given a copy of this early photograph card. Initially you may think its just an unknown cricket name, but what other secrets does it hold. The card has a hard backing and measures 6.5 by 10.5cms.

There were many cricket teams on the Thames Goldfield, groups of individuals and business groups formed cricket teams. The men are posed for a group photograph. Is the man in a suit the team manager or business sponsor?
When was the photo taken? W H Reed as the back of the card reveals - was a photographic artist in Grahamstown, Thames. Mr Reed died in 1878, so this card is before that date.
What do we know of W H Reed? In 1865, Reed was a photographer in Shortland Street, Auckland. The Thames newspapers are online from 1874, and Reed appears in them performing concerts, selling instruments and working as a tuner. Reed is active in the social scene performing at numerous entertainment programmes. An example in the Thames Star 21 December 1875, where he was performing some of his own local songs for which he was renown for. He was also playing a wide range of musical instruments.
At this time in 1875, Mr Reed's skill as a photographer was noted in the local papers. He had taken and presented photographs of the Wesleyan Women's Bible Class. Then in the Thames Advertiser,  9 October 1876 W H Reed was advertising his business as a photographer. "The newest and best thing in Photography." 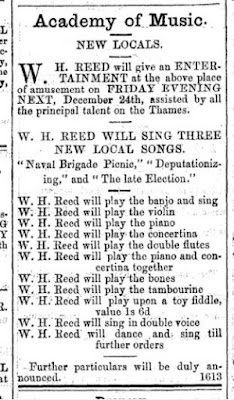 In 1877 Mr Reed made the news for taking a photograph of  painting.
"We have seen a very good photograph of the oil painting done by Mr Calder of Paeroa, of the Gorge and the Ohinemuri river. The photograph is the work of Mr W. H. Reed, and gives an excellent representation of the picture, being about 8 inches by 6. The details are truthfully set forth, as is also the back ground, and it is an excellent work of photography, and much credit is due to Mr Heed. We hear that a copy of the picture will be given to every subscriber to Mr Calder's Art Union, whether he be successful in drawing the big prize or not, so that subscribers will have something for their money." Thames Star, 25 January 1877
During the 1870s Mr Reed appears to be either managing or working from the Academy of Music. Applications made to the borough council have his name as the applicant and contact. Then in May 1877 Mr Reed advertised in the paper that he was resuming his photographic business in Brown Street - the details of where he had been are not given.
In January 1878, Mr Reed was singing with Miss Leef at Tauranga. Miss Leef was a well known singer of Auckland, whom he married on 13 March 1878. "Mr W. H. Reed, of the Thames, has tied in the connubial knot with Miss Leaf, the Auckland nightingale, this morning. They have gone to spend the honeymoon at Waipawa." The couple performed in musical programmes around the Wanganui area before returning to Thames a few months later. (Thames Advertiser, 25 July 1878)
In September 1878, it was with deep regret that the people of Thames learnt that Mr Reed was again leaving the town. Thames Advertiser,  18 September 1878:
"The Thames is about to lose another useful citizen in the person of Mr W. H. Reed, the talented musician and photographer of Brown Street, Mr Reed is about to enter into business as a musical instrument dealer in Queen Street, Auckland, succeeding to the business now conducted by Mr Turrell. The Thames can ill afford to lose such a useful as well as gifted musician as Mr Reed, who has always been foremost in offering his valuable services in aid of tiny' charitable object, or to assist in amateur entertainments got up on the Thames, Mr and Mrs Reed have likewise sustained a very prominent part in the choir of St George's Church for some time past, and here their valuable assistance will be greatly missed."
Mr Reed had intended to return to The Thames for visits and business, but the unexpected happened.
Mr William Henry Reed died in Auckland on 23 October 1878, his obituary appeared in the Thames Star 25 October 1878:
"A painful feeling was caused on Wednesday night by the circulation of the report that the relatives of Mr W. H. Reed had received a telegram stating that he was dead. The news proved to be true. Yesterday's Herald contains an obituary notice of Mr Reed's death, but beyond that he died "on October 23, at the residence of his father-in-law (Mr Robert Leaf), Parnell," no particulars are given. Mr W. H. Reed was well known on the Thames as a photographer, and as a musician and singer of ability, possessing talents of a versatile character, and being especially happy in hitting off local topics in songs of his own composing. Only a few weeks ago Mr Reed purchased a business in Auckland, and at the time of his death a notification appeared in our contemporary's columns stating that he was about to visit the Thames on business. His death was very sudden - after a few days' illness, we understand, and the cause was an acute attack of dysentery. Mr Reed will be much missed in a large circle of acquaintances. Whether in entertainments of his own as a professional, or when giving his services in the cause of charity, he was always appreciated, and his unexpected demise will be sincerely regretted by all who knew him, and by none more than those for whom he has so often exerted his powers in this district. Mr Reed was to be buried to-day, and as he was a member of Lodge Sir Walter Scott, members of the different lodges in Auckland were invited to attend the funeral. "
A closer look at Mr W H Reed's cricket photo
(Courtesy of G Farquhar) 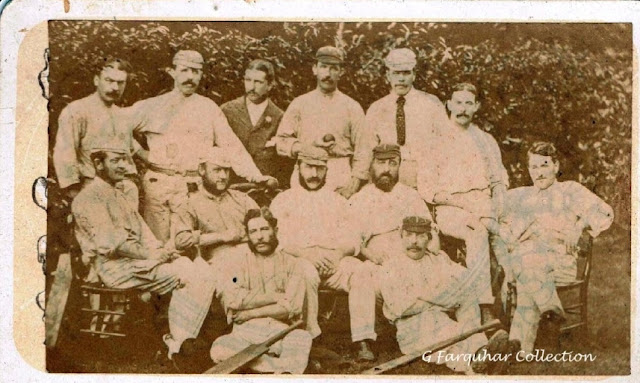