In a previous post, Mr Newdick's Miner's Right was shown, as having been issued on 15th August 1867 - 150 years ago today. Ironically Alfred Newdick came close to being a member of his friend William Hunt's party who found gold at the Shotover Watercreek 10 August 1867.

Over the years many old miners shared their stories about their first few years on the Thames Goldfield, Mr Newdick among them. In the Thames Star 17 May 1926, Alfred recalled his early days on the goldfield. At the time he was aged 80 and living at Herne Bay.

Alfred spent 45 years mining at the Thames, stretching back to before William Hunt “made the sensational discovery that acted as the signal and started the rush of thousands of prospectors who had but one mark before them – gold!"

It was just bad luck that Newdick was not part of the Shotover Claim, as William Hunt had urged him to go to the Thames. “It was a Maori who showed Hunt the gold,” declared Mr Newdick. He recalled that Hunt was a friend of many Maoris, “and one day one of them took him to the (afterwards) ‘Shotover.’ Hunt found the gold, but did not say a word to a soul until the ground was thrown open. On a Sunday night Mackie 9 (sic) and Bailee (sic), the wardens, got word that the field had been proclaimed. Hunt had pegged on the Saturday. He went to the wardens’ office –an old raupo whare – and put in his claim. He wanted three mates, and the first he chose was Clarkson, and the others were White and Cobley.”


Mr Newdick recalled that he pegged out the Long Drive on the south side of Hunt’s.  “During his 45 years at the Thames, Mr Newdick worked all over the peninsula…he got out of his own mine too soon, before companies were formed…for when Long Drive shares were put into script they were the highest in Thames. Amongst other claims he pegged was that of All Nations, with Harry Olsen.”
On the occasion of Newdick’s Diamond Wedding celebrations in September 1928, Mr Newdick once again remembered the good old mining years. (The Thames Star 28 September 1928)

Newdick spoke of two of his claims that went onto great riches on the Kurunui Hill – the Long Drive and the All Nations. He marked the Long Drive immediately after Shotover had been pegged.  Newdick was assisted by William Howorth, Charles Snowdon and Rogers. “As originally marked out, the Long Drive claim composed eight men’s ground. Its shareholders were Alfred Newdick, Charles Snowden, William Howorth, Harry Saunders, John Bailey, Harry Curtis, Rogers and Wilson.” Mr Newdick recalled how the claim got its name and it revolved around the fact that by the time the men went to register the claim they had already driven their tunnel 160 feet, the mouth being 200 foot north of the later entrance. Newdick said “when we went to the Warden’s office, and was asked what name he proposed to give the claim, he answered: ‘Well, we have the longest drive on the field up to date, so I’ll call it the Long Drive.’ And Long Drive it accordingly became.” 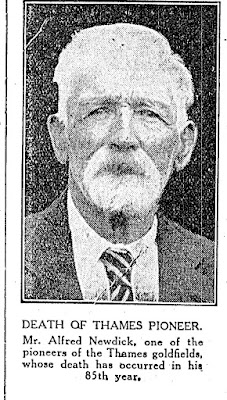 On another occasion, Newdick was to chance upon a find on the crest of the Kurunui Hill. He picked up a piece of quartz in the area and was amazed to find it studded with gold. They found the leader above the mouth of the Moanataiari Tunnel. The men covered their find of rich picked stone and proceeded in haste to the Warden’s office where six new miner’s rights were registered.

“They worked the surface find in an open cutting, as as far as he can remember they took out about 1000 oz of gold in that manner.”

Mr Alfred Newdick, Thames Goldfield Pioneer, died in 1930. (photo right - New Zealand Herald 6 May 1930) One of  Mr Newdick's obituaries recalled his long memorable mining career; while recognising he had success, the report noted that luck had escaped him - as he had sold his claims before the big money was made. (part of article below)

Stories like this were common on the field. Men who either made and lost a fortune many times over, or those like Newdick who made great find's but for a variety of reasons moved on too soon. Only later to hear that their claim had turned into an economic success. 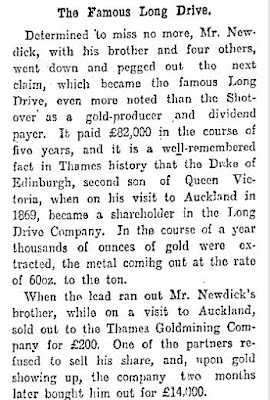 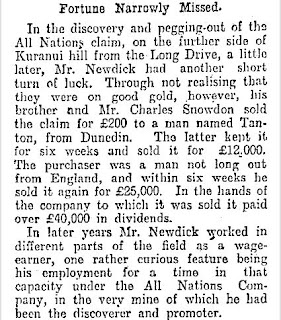 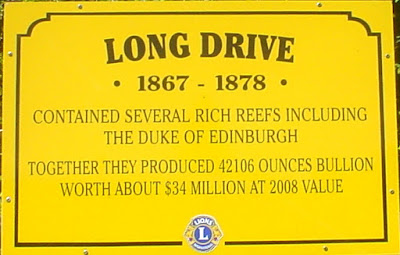