Thames (NZ): Memories from the 100th Commemorations of Thames a Goldfield 1967

Introduction:
While the town has begun the celebrations for the 150th year since Thames was proclaimed a Goldfield (30 July 1867) and the Thames Goldfield was officially opened (1 August 1867) - many of us remember back to the 1967 commemorations.

The Thames Library has a display that showcases ephemera and a wonderful scrapbook full of newspaper clippings. 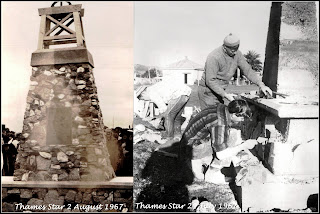 The town’s excitement for this milestone started several years before the 1st August official date, as planning for the commemorations were undertaken. In February 1966, it was decided to build a natural stone memorial as a tribute to the early miners, and that it would be sited at Jellicoe Crescent next to the skating rink. The project chosen from a list of ten which included: extension to the library, swimming pool, and decorated miner’s cottage.

The design of Thames’ memorial was based loosely on one that Mr A C Espiner had seen in Ballarat, Australia. They had a poppet head over a stone archway. Espiner liked the idea of the poppet head, but felt the Thames one, should be covered with polished stones from around the Thames District. (Photos above (left) during construction and (right) on the day of unveiling) 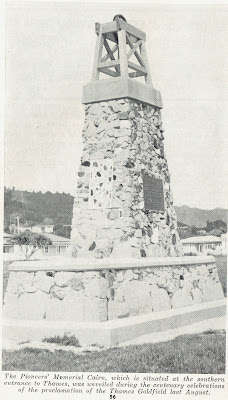 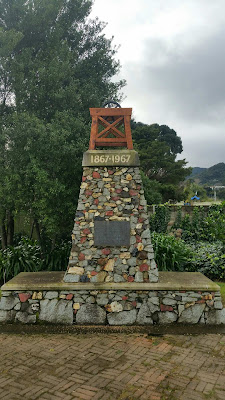 The unveiling took place on 1st August, at the area now known as Taipari Park, a historically important and tapu site. The honour of unveiling the plaque was given to Alderman Joan H Norris from Thames’ sister city Abingdon in England. Assisted ably by Mayor W C T Brunton. 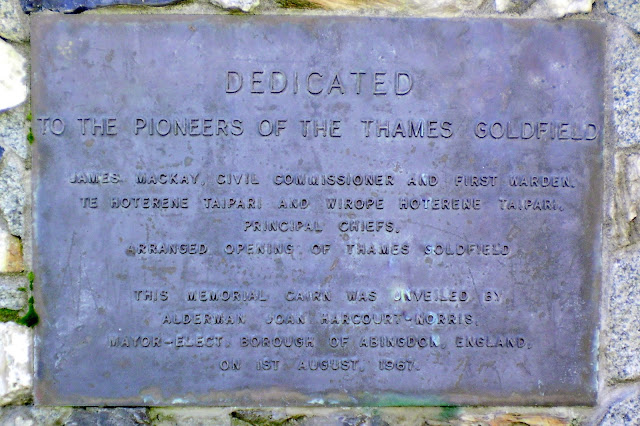 On the 'back' east side of the Memorial is a summary of Gold finds for a selection of claims. The total of produced gold stated to be 69 tons. 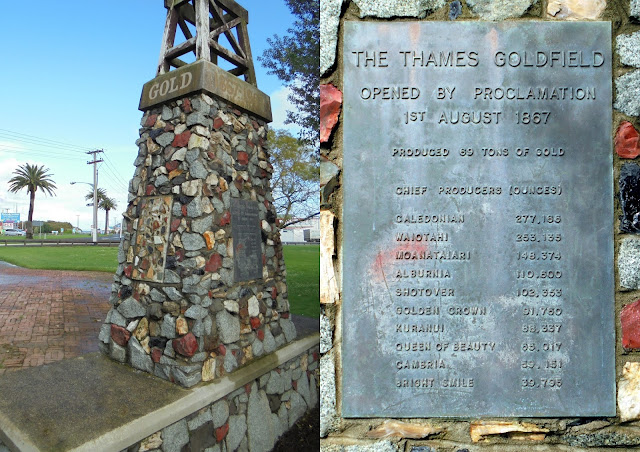 Later in the evening, 1st August 1967 a Civic Reception and dinner was held. Grace was said by Rev Father Lyons, the toastmaster for the evening Mr J E Arbury. The menus started with Vegetable soup, followed by entrees, Roasts & Vegetables and a selection of Sweets. 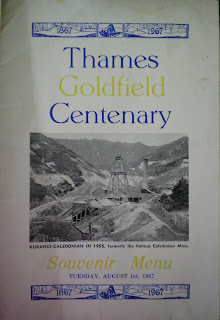 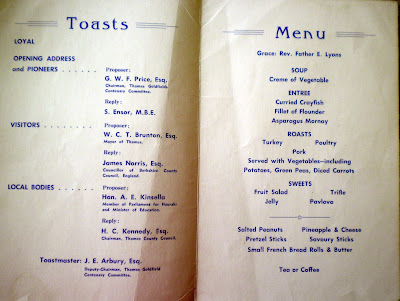 On Friday 4th August 1967 the Thames Goldfield Centenary Civic Ball was held, it was a matter of first in first served as tickets quickly sold out!

The highlight for nearly 30,000 people came on Saturday 5th August, when an enormous crowd gathered to watch the Thames Goldfield Centennial parade. A Queen Carnival had been held, Miss Dawn Makiri was the Queen and her attendants Misses Sheryl Kerby, Jan Fuller and Heather Wright. The procession was two-and a half miles in length, each section headed by one of six bands - it took an hour to pass through Pollen Street. "Schools, voluntary organisations, sports bodies and country districts joined with industrial and business concerns in one of the biggest displays of its kind ever seen." (Thames Star 7 August 1967) 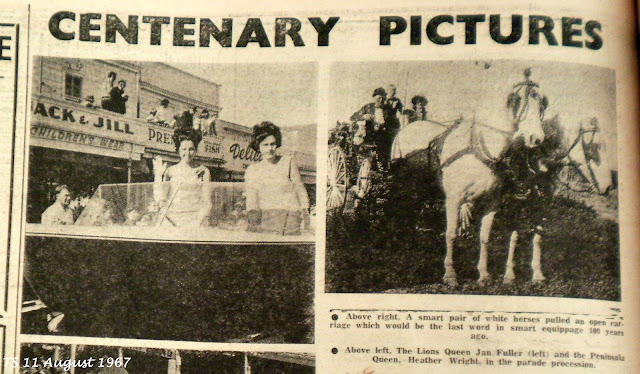 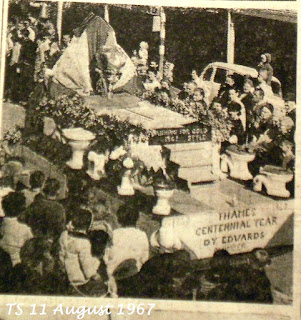 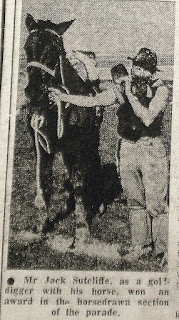 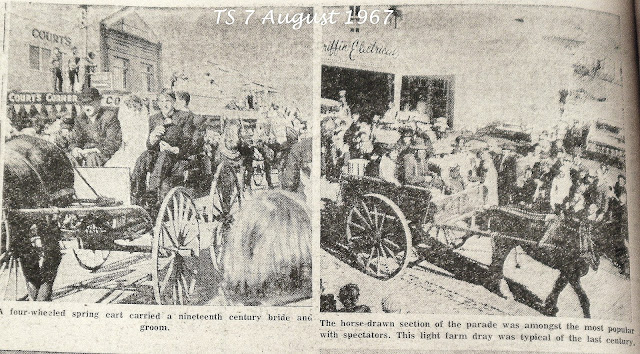 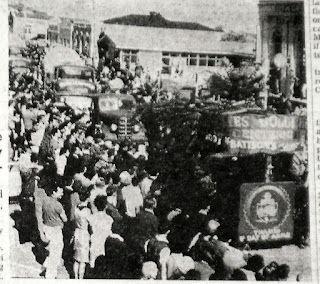 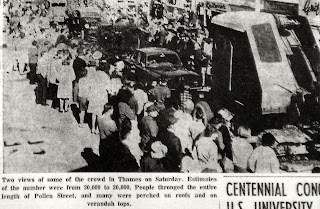 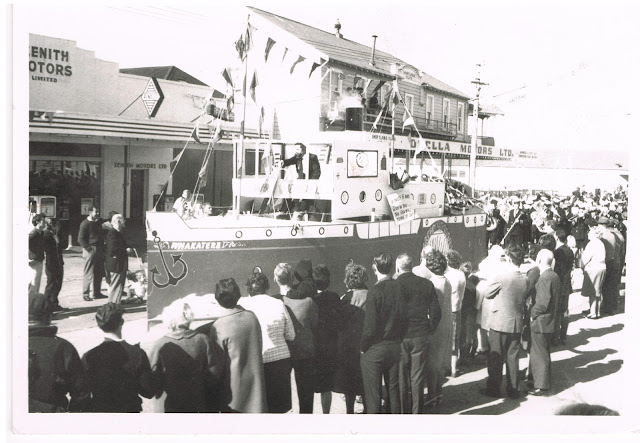 ABOVE: Model of the PS Wakatere. There was a float in both the 1967 and 1973 parade, but this appears to be the 1967 parade taken from the southern end of Pollen Street.
Source: K Godwin Collection 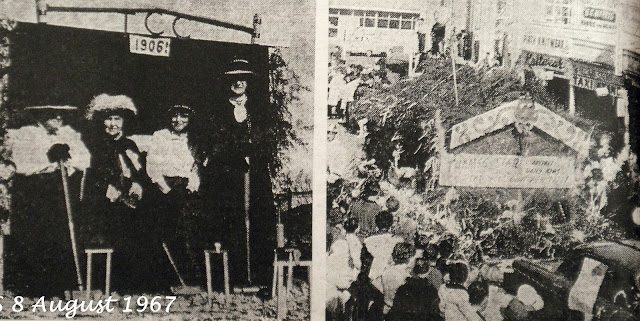 A highlight during the centenary was the number of men who grew beards for the occasion and a contest was even held to find the best beard. Different awards were given out; the bushiest beard was awarded to Mr C C M Wilton of Harvey Crescent, Thames. (photo below of the men in the beard competition - D Campbell Collection) 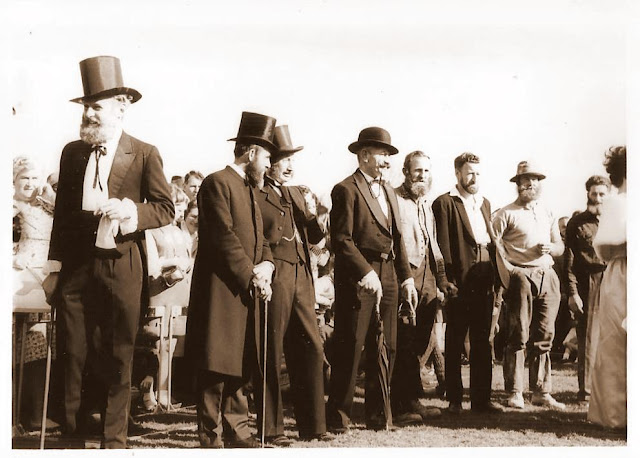 This time the 150th Commemorations are taking a different approach, with events spread through the year. Details can be found online at The Thames Heritage Website.