One hundred years ago, Thamesites were believing (or rather hoping) that the Great War was nearly over. How much longer before their men and women would be coming home? Their boys had survived this long, surely things would be okay and they would be back home again.

August and September 1918, were some of Thames' darkest 'war' days. Twenty-one servicemen were Killed in Action or Died of Wounds/Disease during these war months. Just wait till October and the gravity of these last few months (one hundred years ago -1918) will really become a reality. 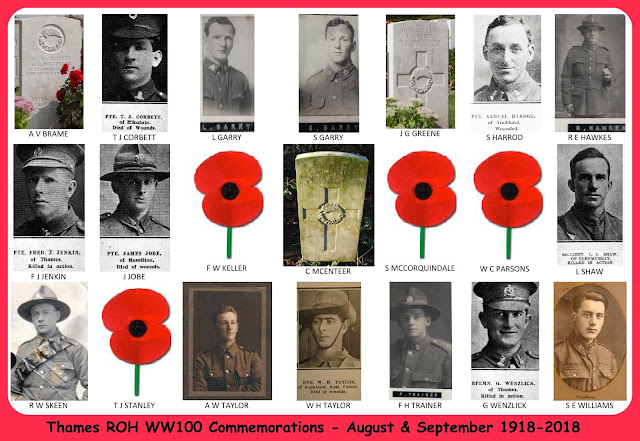 Who were these men?

BRAME Albert Victor: Albert was born in Thames, the son of John and Mary Brame; and was living in Waitoa when he enlisted.

CORBETT Thomas Joseph: Born at Hikutaia, the son of Thomas and Mary Corbett. Thomas went to school in Thames, and worked as a fitter at the local foundry A & G Price.

GARRY Lewis: Lewis was a twin, his parents were Alfred and Jessie Garry. The family came from Waipawa, initially living at Parawai, then in Sandes Street. The boy's mother died when they were just three years old.

GARRY Sidney: Sidney Godfrey Garry was Killed in Action just three days after his twin brother Lewis. Both killed on the same battlefield at Bapaume, both are buried in Gouzeaucourt New British Cemetery, Northern France.

HARROD Samuel: The son of Henry and Anna Harrod, the family lived up the Waiotahi Creek. Samuel was working in Auckland when he enlisted.

HAWKES Robert Edwin: The son of Richard and Mary Hawkes of Tapu. Robert went to school at Tapu and later worked on his farm at Tapu. He was 37 years of age when he went to war.

JENKIN Friedrich James: The son of James and Martha Jenkin of Augustus Street, Thames. Friedrich was schooled in Thames, then worked as a carpenter for Mr Whitehead of Parawai.

JOBE James: Born in Thames, the son of James and Mary Jobe; the family lived in Broad Street. Jobe was married and lived in Hamilton at the time of enlistment.

KELLER Francis Walpole: Francis was the son of John and Alice Keller, born at Thames in 1876.

MCCORQUINDALE Stuart: Born at Oamaru, and later lived in Karaka Road, Thames. Stuart was a mechanic in Whangarei when he enlisted in 1916.

MCENTEER Claude: Born at Thames the son of James and Elizabeth McEnteer. Claude attended the Waihi School of Mines.

PARSONS William Claude: Claude was born at Thames, the son of  John and Lucy Parsons.

SHAW Leonard: Leonard's NOK was Miss J L Shaw (Sister), Thames Hospital; he was the son of the late John and Jessie Shaw, of Glen Murray, Auckland. Shaw had served at Gallipoli.

SKEEN Reginald William: Skeen was the son Benjamin and Margaret Skeen and was born at Thames; he attended the Kauaeranga Boys School. He worked at the BNZ at Thames.

STANLEY Thomas James: Thomas was born at Thames; he was working as a contractor on enlistment at Te Aroha. NOK was Mrs Annie Louisa Stanley (Wife), Te Aroha.

TAYLOR William Henry: William was born in Auckland, the son of Amelia and James Taylor. The family then resided at Irishtown and William attended the Waiokaraka School. Taylor was a miner in Australia, and subsequently served with the Australian Imperial Forces.

TRAINER Francis Herbert: The son of Edward and Emily Trainor of Tararu. At the time of enlistment, Trainer/Trainor was a self-employed fisherman of Tararu.

WILLIAMS Stanley Earl: Stanley was only 17 years of ages when he enlisted, he had attended Thames High School in 1915.

FURTHER READING:
From Gold Mine to Firing Line, The Thames and the Great War 1914-1918, Editor M Hawkes. Available at The Treasury, Thames.
Posted by Althea at 9:18 PM