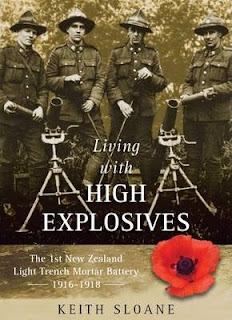 I have been remiss of late not updating the latest 100 year anniversary deaths from World War One. Although the war had finished in 1918, many men continued to die and were classified as war deaths. An update on that will follow in the near future. For now I want to remind all that we need to keep looking for any names we may have missed - a book at the Thames library contains the name of two new local men who served in the war.

The book itself is an easy read and tells the story of the different battles and the men involved. With lots of photographs of the soldiers, that brings their experience to life.

There is a full list of soldiers at the end of the book, with two being identified as from Thames and one from Coromandel. Of course, chances are there will be more who have a Thames connection.

The two names I did not have on the Thames-Hauraki WWI register are: James Richard ALLEN (Serial No 44671) and James Henry BAIN (Serial No 11382).

Allen was born in Coromandel, and was working as a boilermaker in Auckland when he enlisted. His total war service was three years and 60 days.

Bain was born in Thames, a roman catholic, his sister Delia was named as next-of-kin on his attestation form. Before the war started, James was self-employed as a farm contractor at Kaihere.

In the book mentioned above, Jim Bain gets numerous mention,many related to the sport played by the group. In one particular game of rugby 3 November 1917 (described as the lull before the storm) - the Trench Mortars beat the 1st NZ Infantry Brigade 8 - 0. "Jim Bain played easily the best game on the ground." page 224. Bain served three years 92 days in the war and was awarded the Military Medal.

Another Thamesite is also featured in the book, in a sad series of events that led to him being Killed in Action 28 September 1918. Private William Claude Parsons (Serial No 34425) was born at Thames, the third son of John and Lucy Parsons of Thames (later Waihi). The family lived in Grey Street, and John worked as a miner (1896 Electoral Roll). Parsons was one four brothers who all served in World War One.

The Sloane's book Living with HIGH EXPLOSIVES covers the events that led to Private Parsons death on the battlefield. Along with his war file, there is a sad sequence of events in and out of hospital. Many absences, that ended in an 18 month imprisonment sentence with hard labour. In September 1918, William's "sentence was suspended and he was marched out to the Entrenching Battalion. Within six days of his attachment there, he was killed in action near Trescault on 28 September 1918." page 191. 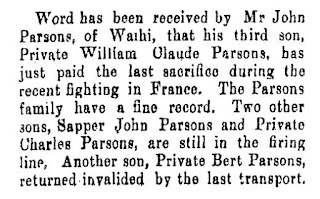