In the news over the past week, have been a series of reports and articles on the disaster that happened 28 November 1979, that affected not just New Zealand but many around the world. The day that Air New Zealand Flight TE901 left Mangere Airport destined for a sightseeing flight to the Antarctica.

At 12.49 p.m. NZST, the aircraft crashed into the lower slopes of Mt Erebus killing all 237 passengers and 20 crew on board. It was the worst civil disaster in New Zealand's history.
Source: https://nzhistory.govt.nz/culture/erebus-disaster

Thames-Coromandel Connections
Step back to 1979, and travel agents in the area were promoting the flight to Antarctica. Its hard for many to talk about it to this day; if you are like me, maybe you too had planned to go on the flight, but changed as time approached. For nine people from the region, this was their last flight.

Looking at the local Thames Star newspaper, I was surprised to see that the disaster did not make the headlines, maybe I need to look into 1980 editions.

There is mention in the Thames Country Women's Institute report that Mrs Barbara Wood and her husband were aboard the plane that crashed on Mount Erebus.

On the December 28th, the paper reported that nine people from the region had died in the crash. 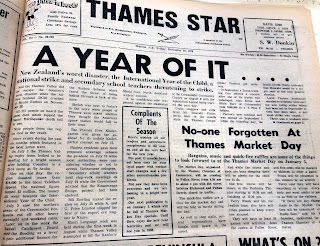 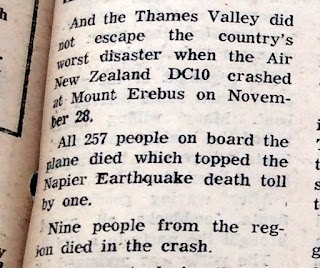 There are pages dedicated to recording and gathering information on the crew and passengers that died 28 November 1979, forty years ago this year.

A selection of sites include: Erebus, and Roll of Remembrance, Memorials, and National Erebus Memorial and memorial names. A quick 'google' and you will find many more sites. The New Zealand Herald articles and podcasts are available to read and listen to.

Search the memorial list for names from different areas. There are names from Thames, Te Puru, Turua and Pauanui. At this stage the names will not be listed, until I gather newspaper clippings for confirmation.