Thames (NZ): When was the Old Men's Home moved to Tararu?

In today's Hauraki Herald dated 29 November 2019 there is an article  titled: Bupa Tararu marks 135 years. Did they mean that Bupa was 135 years old? Surely they did not mean that the homes at Tararu were 135 years 'old' in terms of when the land first became a place for aged care?

The facts below, will show that the land for a Men's Home was purchased in 1894 - 125 years ago - that is when the home moved to Tararu. 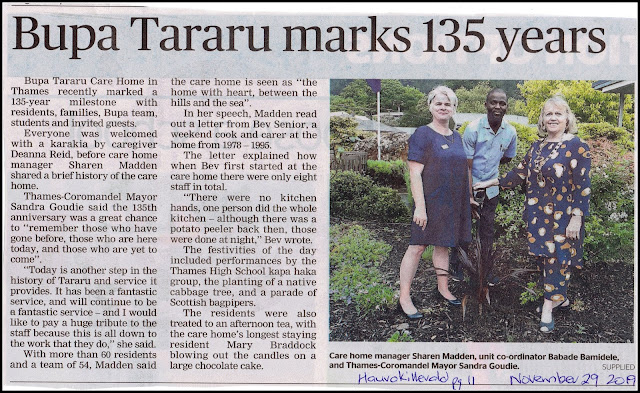 Initially there was an Old Men's Shelter on the eastern side of Baillie Street, near the Karaka Creek - known to be occupied from September 1879. The need for the care of the elderly, typically miners was great in these early goldmining years. The Charitable Aid Board which managed the home (located near the Goldfield Hospital), added more rooms in 1889.

In 1894, the Charitable Aid Board purchased land at Taruru,12 acres that were owned by Messrs Wilson and Darrow. By December came the good news that the Government was paying towards the expense of moving from Baillie Street to Tararu, and that an adjoining property was to be purchased for an Old Women's Home. 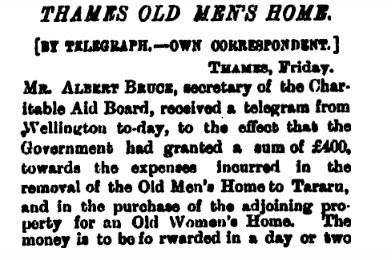 By January 1895, work was well underway on the erection of buildings at the Tararu site. In February the Men's Home was complete and being occupied, while the building to be used for the Women, was to be moved back from the road boundary to be in alignment with the Men's accommodation.

The Health Board structure changed, Thames Hospital Board became part of Waikato Area Health Board, and the homes became privately owned.

The District Homes provided vital care over the time it was run by the Charitable Aid Board / Thames Hospital Board. Men and women came from around the world to work and live on the Thames Goldfield. There were numerous examples where one partner was left alone (no living family in New Zealand), or men who were single and never married. These pioneers had no one to care for them; the homes at Tararu became the last place of residence for these settlers. May that care continue throughout the following years, regardless of the ownership.

In conclusion, the care of aged people at Tararu has been inplace for nearly one hundred and twenty five years (125) - NOT 135 years as quoted in the local newspaper. So if anyone knows what the 135 commemorations were about, please let me know!
Corrections always welcome! 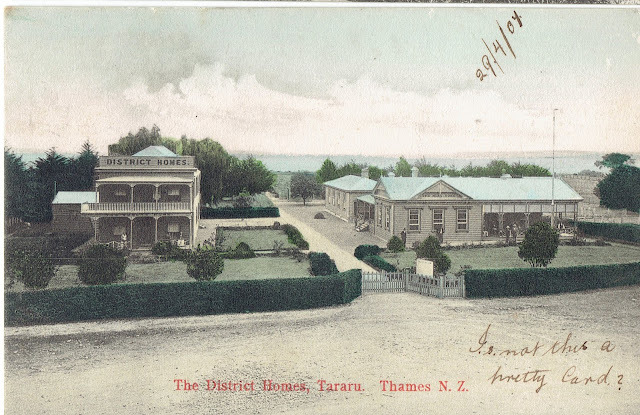 The District Homes at Tararu c1904 - Women on the left and Men on the right.
Posted by Althea at 9:55 PM