If only the sender had put their name on the back!!! But alas, they have not, there is however a Hastings postmark dated 12 SP 77. 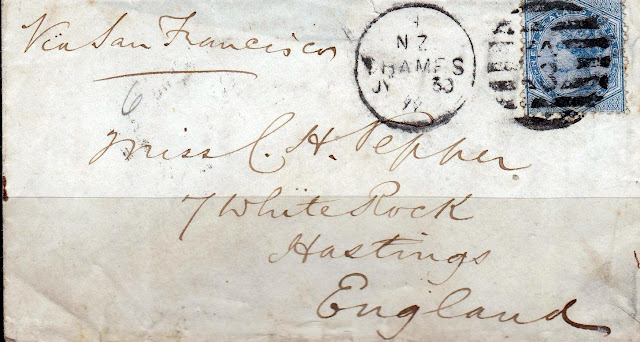 Originally I planned to look at mail collections and how a letter got from Thames to England...but the genealogy detective in me got the better of the day, so I have set about to find out who COULD have been the sender of the letter/ Pure speculation, but read on.

Who was the letter addressed to?
Miss Catherine Harriet Pepper, lived at 7 White Rock Place, Hastings with her sister Anne. They ran a boardinghouse. Their parents were Moses and Mary Pepper. Both were unmarried - both were born in Romsey, Hampshire.

Who wrote the letter?
According to family trees on Ancestry.au, the sisters' had several siblings including a brother named John who was born at Romsey in 1824.

In Tapu on the Thames Coast around the time the letter was written there were several Pepper's including John and William, plus a solicitor in Thames.

My hunch for the best candidate presents in the death notice of Mr John Pepper in 1894, leaving me to believe that he may well have been the writer of the letter. The age and place of birth fits with the fact that he was probably Catherine and Anne's brother!

Mr John Pepper was a well respected member of the Tapu community and involved in the Church and Sunday School. Pepper was also involved with mining and had a Battery at Tapu. 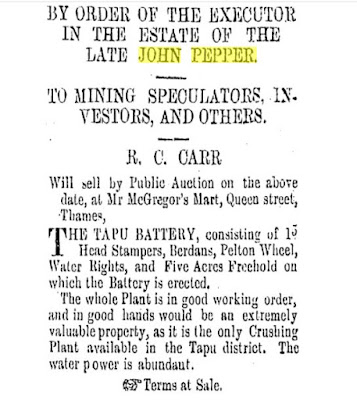 CLOSING
Speculation on my part has it that the letter to Miss C H of Hastings in 1877, was written by her brother John Pepper of  Tapu, Thames Coast.
Posted by Althea at 4:34 PM