From the time the Thames Goldfield opened nearly 151 years ago, there were periods of building growth and decline. Accommodation over the years was at times stretched to meet the needs of the travelers that came to visit or work at The Thames.

The numerous hotels always provided a great source of accommodation, along with hostels and other private establishments.

In 1870 Street Directory there were 102 listings for 'Hotels & Taverns'. While we know that at times there were many more and in fact a total of over 140 unique hotels at The Thames at various times. There were also Boarding houses advertised.

At times when the hotel numbers were being reduced, the liquor license was refused by the Thames Licensing Committee, but an accommodation only license granted. Such was the case for the Kauaeranga Hotel, near the end of the pub's history - no liquor, just accommodation!

In more recent decades motels were built, with locals often thinking perhaps there were too many - but tourism appears to have led only to expansion and an increase in available bed numbers.

It is fifty years ago that one of these motels was built and opened - namely the Crescent Motel, that now goes by the name of Shortland Court Motel. 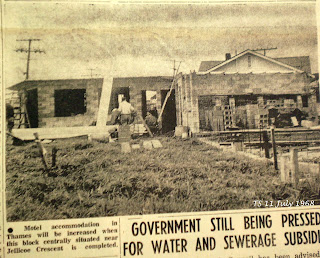 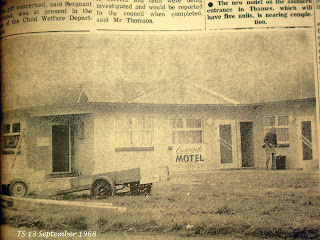 From July to September 1968, the Thames Star Newspaper reported on building progress for a new motel that was under construction in the Jellicoe Crescent area. This was the Crescent Motel' 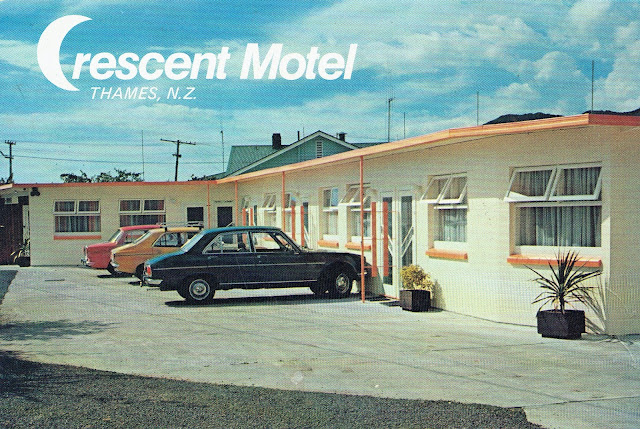 The postcard above shows the original motel layout, in later years the motel was expanded to include extra rooms facing Fenton Street (as shown in the google maps view below).