Since April 2015, I have been writing special blog entries to commemorate all the men from Thames who died during World War One. To-date between 25 April 1915 and 16 July 1918, 171 young Thames men had lost their lives during the Great War. 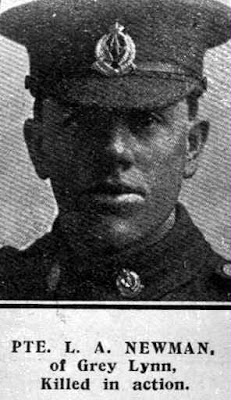 In one weeks time, 23 July 2018, it will be one hundred years since the death of another Thames-born man, Leonard Arthur NEWMAN.

Killed In Action 23/07/1918 In the Field, France; NEWMAN Leonard Arthur; 18891; Private XXII Corps Cyclist Bn
Leonard's war file is online at Archives New Zealand. For those new to war research, all the World War One personnel files have been digitised. You can either search from Archives or from the Auckland War Memorial Cenotaph (at the end of each person's entry).

Leonard was the son of Harry and Jane Newman, born 24 July 1893 at Thames. The family lived in Edward Street, and Leonard attended the Kauaeranga Boys. and the Kauaeranga Girls' School - both located with in a few blocks of his home.

Private Newman embarked from New Zealand 4 April 1916. He was wounded in action 3 February 1917. Newman was treated in France then sent onward to England for further treatment and recovery. In June he was sent back to France. Later that year he was back in hospital at a Gas Cleaning Station.

It was March 1918 that Private Newman was transferred into the Cyclist Battalion. Then on 23 July 1918, he was Killed in Action on the battlefields of France,

Leonard's obituary in the Thames Star Newspaper revealed more details on his prewar life and war service. It was noted that he was a talented rugby player and had junior rugby at The Thames, and later in Auckland. 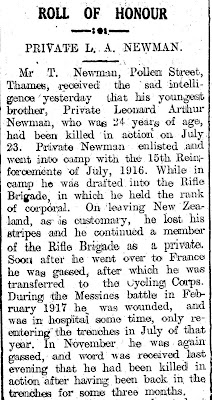 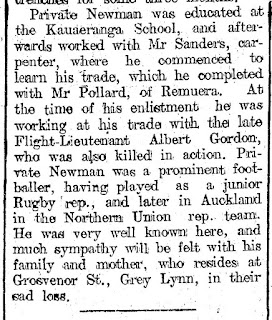 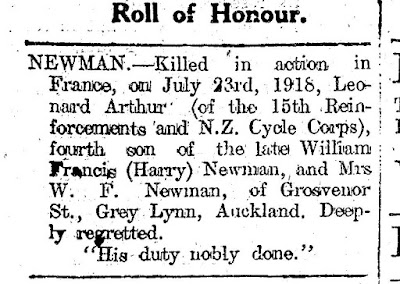 LEST WE FORGET
There is a memorial for Leonard Arthur Newman at the War Grave Cemetery: Marfaux (New Zealand) Memorial, France.
Posted by Althea at 7:43 PM