Thanks to Tom for spotting some new / higher resolution copies of photographs of Thames at Museum of New Zealand Te Papa Tongarewa.

The one below is a classic, that looks over the Government Buildings in Queen Street, with the Wesleyan Church and Sunday School top centre. So much more, but of particular interest for me was the signage for the Hazelbank Hotel. 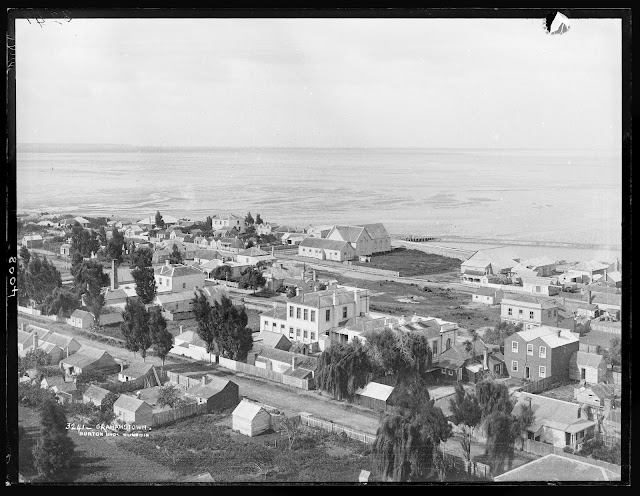 Background From the Hotels of Thames:

"The Hazelbank Hotel in Brown Street was located north of the Wesleyan Church (now the site of the Thames School of Mines). Alexander Gillon was publican at the hotel for several years. In May 1875 Gillon applied to the Licensing Committee for a license to sell liquor after 10pm until 4am on the 25th. “He wanted the door open after hours and to sell liquor after hours as he expected a few friends.” (Thames Star, 22 May 1875) The Bench agreed in principal if the house remained closed to the general public, but Gillon wanted it sold to all and sundry – so the application was refused!

In 1882 licensee John Tonkin was in trouble with the law as he had sold drink to Charlotte Hicks on a Sunday and she was not a bona fide traveller. The hotel keepers of the Thames certainly kept the lawyers and court busy with a multitude of Licensing Act breaches.

In 1911 the owner of the hotel was Mr A M Myers, he sold the property and it was converted into a villa residence. The town lamented, that yet another landmark of the town was disappearing.

THE HAZELBANK HOTEL:
A crop of the photograph (below) shows the back entrance to the Hazelbank Hotel off Davy Street, adjacent to Hamilton's Bakery. The hotel's main entrance was on Brown Street - between Cochrane and Albert Streets. 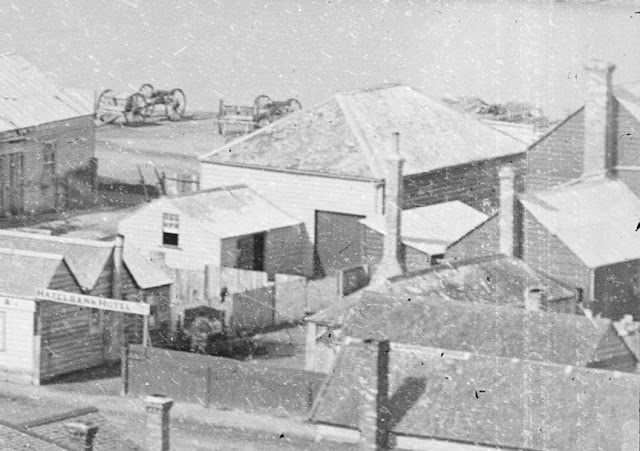 You can download the full photograph at the link given. Enjoy finding the butcher shop, and Mennie & Dey's biscuit factory opposite the library. (see below)

Keep hunting, keep revisiting sites like Te Papa - fingers crossed there are more treasures out there, as more sites update their online content.
Posted by Althea at 9:20 PM