Thanks to Tom for finding a 'new' photograph of The Thames c1890. Yes, there is a new source available full of lots of treasures for the Thames researcher.

The image is available at a newly launched site by Auckland Libraries that is a portal for their Heritage Collections Online - KURA. 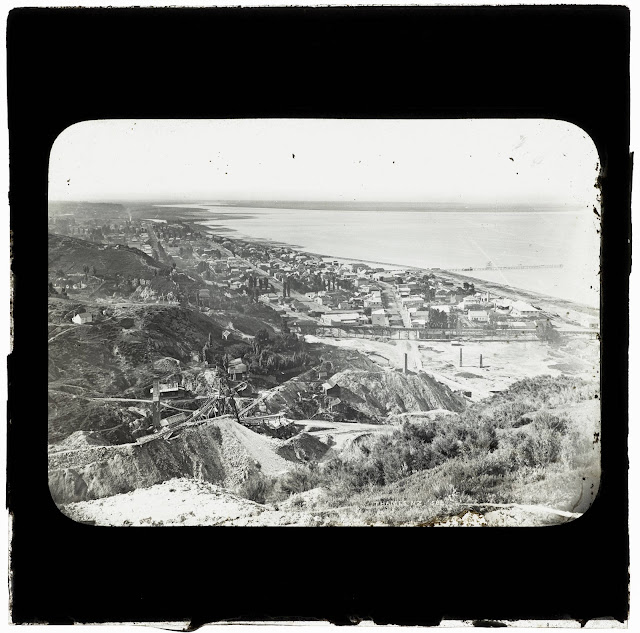 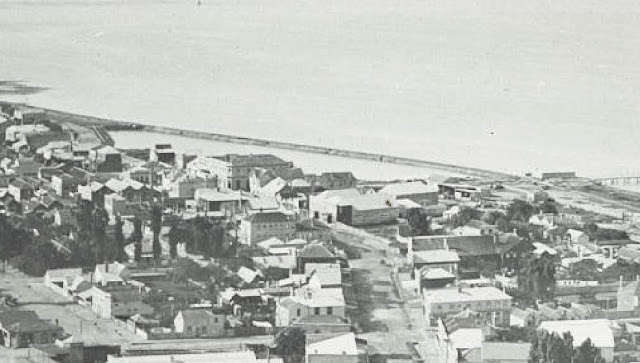 There is so much to see in this photograph. In the crop above, the Pacific Hotel at the corner of Brown and Albert Streets can be seen. Note how the sea came literally up to the shops on the west side of Brown Street, and a reclamation had taken place for the Thames Railway line. The enclosed 'lagoon' is now the site of the Victoria Park. Of particular interest are the tall trees all over the town. Who had planted them and when?

Background on the Trees.
In January 1879, it was reported that willows and poplars had been planted around the Thames Borough streets. It was reported that townsfolk were grateful for the shade the new trees were providing, but alas came the troublesome news that boys and goats were damaging the trees! The goats were eating the bark, while butcher boys were breaking off branches to use as 'switches'.

By April 1881, the editorial noted Mary Street presented a charming appearance with its regular rows of poplars and its well planted out parterres. All agreed that poplars were a great street tree.

Sadly the poplar and willow soon began to wain in popularity. Renown Thames citizen John W Hall pointed out to the newspaper that the trees were a pest and the damage to the towns streets and drains was serious. The suckers and voracious roots were filling the streets and drains. Plus on narrow streets, the trees had spread to touch each other.

By 1886, several residents were writing to the Council to gain permission to chop down troublesome poplars - Mr Connor asked to be able to cut two in Mackay Street, due to crowding on the footpath.

In 1887 an old 'Colonist' put a plea in for the trees, and urged tree haters to realise the good that they did, filtering any contaminants. People complained about the falling leaves, but he urged people to understand it was only for a few short weeks! 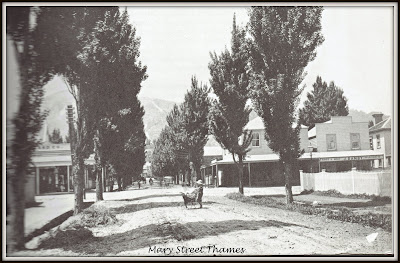 A new plan in February 1889 was that for every tree that was cut down, then another should be replaced. With the plea that no more Poplars be planted!

So Thames' love of the poplars was over, and they were slowly cut down around the town. Patches remain, in particular at Tararu and Irishtown.  Interestingly tree problems have continued over the decades. In more recent years many melia trees were planted in the main street - hindsight found they were also a menace (leaves and berries). They too were removed and replaced with pohutakawa trees.
Hopefully trees will continue to fill the town - from the time the Thames was settled, residents have taken pride in the beautification of the town.
Posted by Althea at 7:47 PM