Thames (NZ):Back in time - Measles at the Thames

As New Zealand and many countries around the world face the challenge of Measles Epidemics, it is timely to look back at firstly the history of these occurrences in New Zealand and then more specifically at the Thames.

A timeline of epidemics in New Zealand, 1817–2009 is available at TeAra.govt.nz, has recorded a timeline of measles epidemics / events. They are:

These are snippets as recorded in The Thames Star Newspaper (available at Papers Past)
1875. 16 January: There was a serious case of measles in Kirkwood Street. It had been tracked back to Australia, the dilemma was where to take the patient should they need isolation. Two days later on the 18th, the Board of Health met and it was agreed a suitable house should be obtained should there be more cases of Measles. By the 25th, another of Mrs Power's children had the measles, while thankfully the first case had recovered and was running about. The Board was resolved to the fact that measles would no doubt do the rounds as other epidemics had done, especially as the disease was rampant in Auckland.
23 March: The cases continued, with new concern that 'native' children from the Beach at the end of Richmond Street were struck with Measles. The concern raised that alot of settlers' children played in this area, and warned parents of the risk.
27 March: The Board of Education agreed to defer examinations until the end of April due to the cases of measles in the town.
While there were numerous cases of Measles at Thames during the beginning of 1875, the statistics assigned only one death to the disease. With nineteen children under one year of age dying in February, one can only wonder retrospectively whether some of these deaths were indeed due to complications, regardless they portray the state of health for children on the Thames Goldfield. 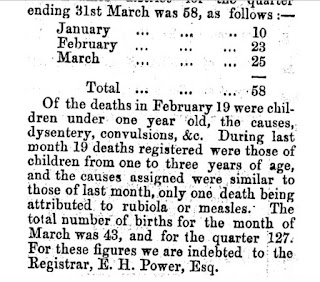 April 1875 rolled around and still new Measles cases were being found. The Thames Goldfield Hospital had to decline the admission of two cases in need as they had no where to accommodate them. The debate continued. The Thames Star itself was affected by the measles, with 15 boys affected with the measles, mostly run boys, the newspaper urged for patience in getting the papers delivered around the town. As the month dragged on the cases kept growing, the Waiotahi School had 75% of their children absent due to Measles. Advertisements were in the paper for a NurseGirl who had already had measles! During the month of April, 38 children aged 13 years and under, died at the Thames. Nine of these were attributable to Measles.

The number of deaths of children on the goldfield was plainly horrific. Worthy of a full research paper. In May 1875, 42 infant deaths were recorded. Yes, a staggering 42. Measles, Dysentery, Bronchitis and Typhoid Fever were the cause.

By July, the Measles Hospital had been set up and Dr Lethbridge requested extra payments for all visits made to the inpatients. The following month came the sad news that yet again there were new cases of measles in the town.

Jame Mackay himself was not immune, and caught measles while visiting Wellington in September.

1882, September 8th: At the Thames Borough Council meeting it was reported that there had been 34 cases of Measles. Things eased, there was one case reported at the October meeting, and three at the November meeting.

While the newspaper wasn't up-to-date with Measles related news, it appears to have been another tough epidemic for the town. The Kauaeranga Boys' School report in December noted that the epidemic in the middle of the year had resulted in the school only being able to present 120 pupils for examination instead of the expected 300.

1893, May 23rd: The Thames papers kept a close eye on cases of measles around New Zealand and the world. This day came the news that measles had hit nearby Turua, resulting in the school being closed for two weeks to try and stem the disease. It wasn't long before Thames too was amidst a new epidemic. By the end of May, school attendance was severely affected. The cases continued on into June.

On 13 June, the paper reported that Tararu school had been closed because of the number of cases of measles. A few days later Kauaeranga Boys' also made the decision to close their doors - only 60 pupils from a roll of 424 had attended classes. Thames High School followed, and reopened at the beginning of July when the epidemic had eased in the district.

Of interest, it was not until July that the epidemic reached nearby Tapu, and they duly closed the school for three weeks. The newspaper 8th July, reported on the sad events at Tapu the previous day.  The funeral was being held for 25 year old George Hawkes, during the proceedings, his brother James' health deteriorated and he too passed away.

The serious epidemic continued throughout the district, parents urged school board's to delay the annual examinations. By August, the Thames Borough Council were feeling the epidemic financially. Drs Payne and Callin's accounts were queried as to whether the reporting was necessary. Costs so far was sixty pounds.

While each year cases remained at the Thames, in 1907 reports again headlined. On 13th June 1907, the news spread that measles was once again a problem at the Thames. A few days later came the news that young Peter Hansen had died of measles during his visit to the town.

During this epidemic came the absurd news that teachers salaries were reduced, as they were paid on average attendance. The great number of children away from schools such as the Waiokaraka, meant teachers salaried had been reduced.

Measles Miracle at the Thames 1916:

Over the years, the newspaper was always full of 'supposed' cures for measles and its complications. In January 1916, came the news of the miracle of hypnosis in curing a case of complications from measles.

Albert Hanlon's condition had not improved despite medical attention. Hypnotist Mr G Wilson stepped in and within quarter of an hour the boy was cured!  (report right)

Sadly though the reality was that deaths continued through out the country. The army camps were often hard hit. In September 1916, Private C H Phillips of Thames died while training at Featherston Army Camp (during World War One).

In 1921, the schools at Thames, reported that their attendances were greatly affected by the high number of measles cases in the town. As was often the case, when one infectious disease was present there were usually several other. It was said the children of Thames had endured in past months Mumps, Measles then Whooping Cough!

At the end of 1922, Thames Schools reported the measles epidemic was easing; Thames High, South and Central Schools had experienced high levels of non-attendance due to the disease.

School attendance remained the reason that Measles got a mention in the local newspaper. In October 1933, schools in the town reported new measles cases each day - with around a quarter of the roll away each day. Meanwhile the Thames Hospital Board Native Nurse, Miss N Jamieson and visited 52 Pas and given lectures on the treatment of Measles and Gastric troubles.

The Thames Star 5 December 1933, reported on the successful use of serums to prevent Measles in England.

There was a New Zealand epidemic of Measles in 1938, Thames children were again affected. Of interest over all the above epidemics is the number of times that ships coming to New Zealand appear to be stricken with Measles.The disease was still active into August.

While the news was limited in the local paper, the New Zealand Herald 13 July 1938 highlighted the number of cases of Measles amongst Thames Hospital Nursing Staff. Just imagine a staff of 27 nurses and 18 were placed in isolation! (notice below) Query was this 'fake' news or a ploy to calm the town. On the 16th the Matron alleviated everyones fears and assured the community only six nurses were affected (mildly) and that they were recovering. 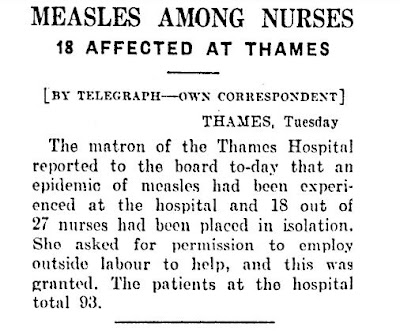 Epidemics continued at the Thames, as they did throughout New Zealand (see timeline introduction above). Nurses at Thames Hospital during the 1940s, remembered that they on several occasions they nursed infectious patients in the adjacent St George's Church Hall.

In 2019, the country is again experiencing a Measles Epidemic, an event many of us thought would never be repeated (given the vaccination programme available).

NB. The newspaper reports do not usually distinguish between the two types of Measles. For more information check out: Ministry of Health Measles Information and Rubella Information.