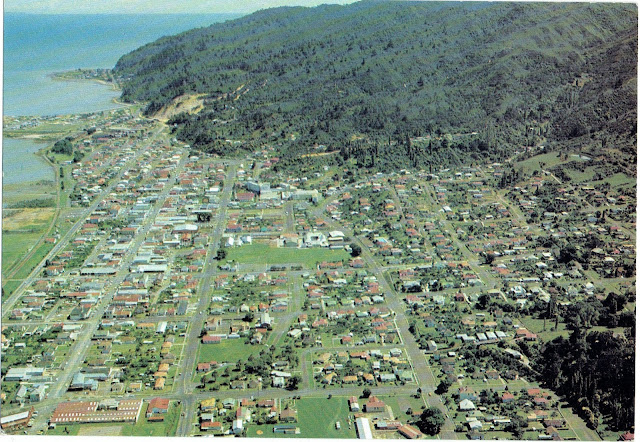 Aerial photographs provide us with a snapshot of the town and in particular a chance to see the changes that have occurred. Glance at the postcard above and start to identify the following: Streets, buildings that have now gone, areas that have changed. What year was the photograph taken?

STREETS: From left to right running vertically we have Queen, Pollen, Mackay, Rolleston and Sandes Street. Lower left, the south end of Baillie Street can clearly be seen with a line of trees adjacent to the St Francis School grounds.

BUILDINGS: Lower left the large Campbell Industries property can be see, with the long gone Warwick Arms Hotel in the left corner. The St Francis School still has the old school block at the corner of Mackay and Willoughby Street, along with the St Brigid's Hall. In the centre is the Thames High School, the Gymnasium is there, along with the old A Block. Check out South School, lower centre, and you will see the old infant block on Grey Street. (see lower photo)

RECLAMATION LAND: On the far left, reclaimed areas are relatively undeveloped, except for the Moanataiari near the upper part of the photograph. The present Goldfield Shopping area is still bare land. (marked 1 below) Don't get me started on the mangroves, or rather the lack of them!

When was the photograph taken? The High School Gym opened in 1973, Goldfields Mall in 1989. The Warwick Arms Hotel was demolished in the late 1970s. The Catholic School Block was demolished in 1986. One telling demolition is the old Thames South School Block, this was carried out in 1975. This last event allows us to say the photograph was taken between 1974 to 1975.
Posted by Althea at 9:54 PM