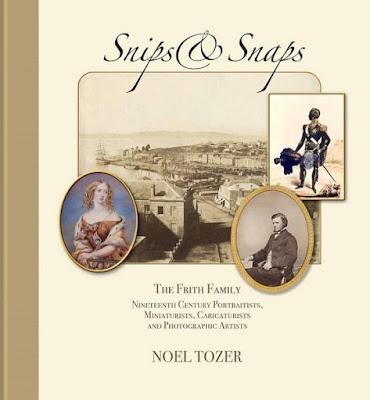 There has been a long list of photographers who have recorded an invaluable photographic history of the Thames Goldfield. A topic that should definitely be explored in greater depth, but for now the focus is on Henry Albert Frith.

A trip to the Thames Library today was timely, because there was a magnificent new book entitled "Snips & Snaps" by Noel Tozer.

Carsons Bookshop in Thames has an overview of the book:
In the early nineteenth century, likenesses in profile, or silhouettes, sometimes delicately highlighted in gold were all ordinary folk could afford. The Frith family, John, his three children, Frederick, Henry Albert, and Letitia, travelled the British Isles inviting the "gentry and residents" to sit for these "highly finished" portraits. This art form was overtaken by the camera and photographic portraiture. The younger Friths emigrated to Australia and New Zealand where they adapted to this new medium with the same skills, producing a record of nineteenth century Tasmania, Victoria and New Zealand and their peoples, both indigenous and the newly settled. This is the story of that transition.

The book "Snips & Snaps" features part of a chapter on Thames - Chapter 8 Henry Albert in Thames and Auckland. Author Tozer gives a concise overview of life on the Thames Goldfield and the mining history. He notes that Frith was in Dunedin in 1867, and had arrived in Thames by 1869, where he remained for ten years.

"From this period, he has left a remarkable record of Thames, the goldfields, its surroundings and its people both the indigenous and the miners, and the surprise is that so many of his photographs have survived to this day, which is probably the result of Thames being a relatively small town." Tozer page 247.

Frith changed premises several times, to various locations in Pollen Street.
In the 1870 Thames Directory, Frith is located north of the Brian Boru Hotel in the block between Richmond and Sealey Streets. 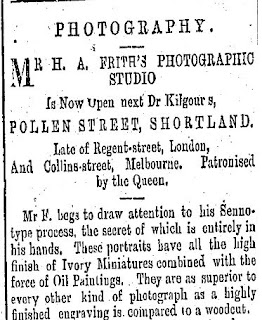 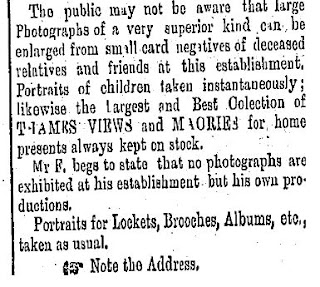 While he ventured around the town taking photographs of landscape and mining matters - he was also renown for his studio work. Photographs of the local iwi made up a lot of his business, and these cards could be purchased and sent around the world. 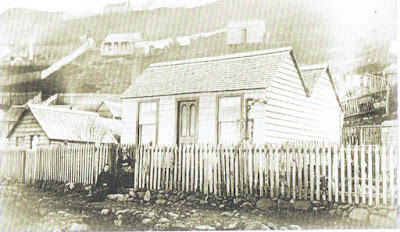 In the book are several high quality images from private collections, many will be familiar to researchers who have previously only seen poor reproductions in early Thames history books. Several though are unique, including this view of life at The Thames. On the right is a photograph from Page 251, of a Miner's Cottage c 1870. Giving a glimpse of life at Thames. Typical cottages, with the central door and rooms off a central hall. Fencing is important and in many cases not just for staking ones claim to land but also to keep roaming goats and pigs out! Note the washing blowing on the line further up the hill. Frith advertised that you could have your house taken to order, perhaps this is why the ladies are posed outside the one above?

In 1878, Frith left Thames and headed to Auckland, no doubt pushed by the economic slump on the goldfield and brighter prospects over the gulf at Auckland.
Frith's Photographs - The following are a sample of the photographs by Mr Frith that are available in New Zealand online collections. 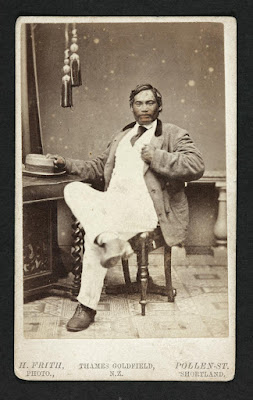 
View of Grahamstown
Posted by Althea at 7:18 PM