While the town and country prepares for Armistice Day  it is important to remember another event. The month that the Spanish Flu left its mark on the people of the town.

The background is available on history NZ
There is a page that outlines death rates.
These figures are taken from Geoffrey Rice, Black November: the 1918 influenza pandemic, University of Canterbury Press, 2005. The population figures are those of the 1916 Census. Death rate is per 1,000 of population. Maori populations for counties are inclusive of interior boroughs. Only registered Maori deaths are listed, and these are not available for some districts. The total death toll for New Zealand is thought to be about 9000.
The details for the Thames Area are: 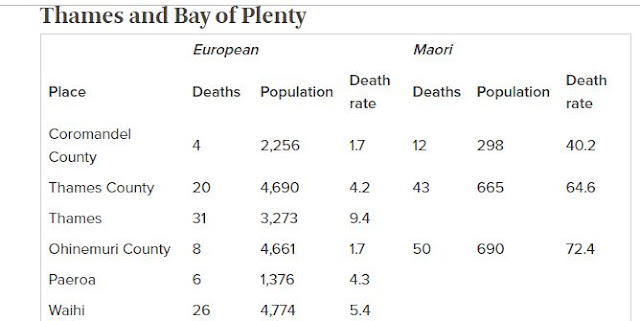 Thames November 1918
We will follow the Thames Star and record the problems the town endured and lives lost - while remembering that the figures are on the low side as many Thames people took ill and died while being away or with family in other towns.

1st November: The paper had news on how the influenza could be treated if it arrived.

5th November: News that the influenza had arrived in Auckland. Concern was expressed that Thames had to plan for the worst.

6th November: The Influenza disease was officially named as an epidemic by the Minister of Health.

7th November: It was reported the Board of Health had locally checked the situation in Thames and it was aware that there were many cases of influenza but none of a serious nature.

8th November: A local man who had travelled by train from Auckland yesterday reported that several onboard had influenza.

9th November: Deaths were occurring but often retrospectively it is hard for us to assign them as flu deaths in the local paper.

Things had really kicked in at Thames with inhalation stations set up around the town and the railway stations. The town divided into three districts with available ladies checking and caring for those who could not, while the technical classes were asked to cook meals for those who couldn't manage.

Eighty-five people went through the hospital's inhalation room, while nearby Kerepehi had over 200 take the inhalation treatment (the area badly hit). Public places had been closed the previous evening, but the high school was kept open.