There is an online documentary series by Jude Dobson that I have not yet had time to watch, but mark it down as a must. Why? When compiling the list of WWI ROH100 for November I noted that there were the names of at least two men who are remembered at the cemetery at Le Quesnoy: 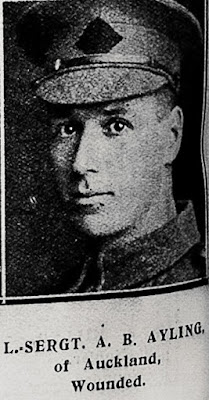 Reading an article by Jude Dobson in the New Zealand Herald, Sunday 11 November 2018, the name of Bernard Ayling is recorded.

The article discusses the Dolores Cross Project where our soldiers overseas are taken a little bit of New Zealand. Dobson recalled placing one for NZ soldier Bernard Ayling, "Another, Bernard Ayling, I knew of as the wounded man on the stretcher in an archive photo - their concern wondering if he would survive. Alas, he did not.

Bernard Ayling was the son of Stanley and Minnie Ayling of Rolleston Street Thames. Stan worked in the Post Office and Bernard was a clerk in Auckland on enlistment. Bernard's brother Herbert had died in 1915.

The full article is online : Armistice day: Lest We Forget.