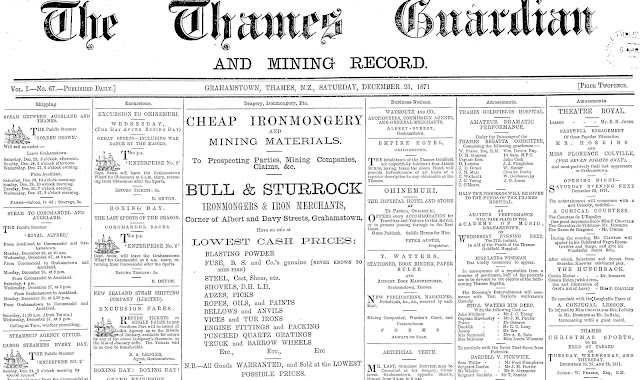 "Available online 1871-1872
Gold was discovered at Thames in 1867 and the town itself grew from three goldfield settlements, Shortland, Tookeys Flat and Grahamstown. By 1868 the population had grown to 15,000. The first newspaper, the Thames Advertiser and Miners’ News was launched on 11 April 1868 by William Wilkinson (1838-1921) and Claude Corlett (c.1836-1906). It was soon followed by the Times and Thames Miners’ Advocate, and the Thames Evening Star, both started by William Shaw (?-1876).
Corlett pulled out of the Thames Advertiser in 1870 and started up the daily Thames Guardian and Mining Record the following year. The first issue of his new paper appeared on Saturday 7 October 1871.

The Guardian folded at the beginning of September 1872, having lasted only 11 months. By then both gold production and the population of Thames were on the decline. The plant was sold to the proprietors of the Hawkes Bay Times and Corlett moved on to the Christchurch Press, which he managed for a number of years.

Although short-lived, the Guardian offers an insight into the life of the Thames goldfields shortly after their discovery not otherwise available because hardly any issues of the earlier newspapers published before 1871 have survived."

INTERESTING NEWS:
Take a look at some of the news reported in these editions.