What's your usual ANZAC Day routine?  Mine involves getting my father's medals out ready to wear, then starting at the Dawn Service, followed by the 10am parade. In between trips to the cemetery, the cenotaph and the Peace Memorial. So what happened this year (2020)?

First, the message had gone out to place a poppy at your letterbox or in you window. Around the town, households came up with innovative ways to make a suitable memorial, including printed poppy photos and other message. The crosses that usually adorned the war cemeteries, were spread out on lawns around the town. 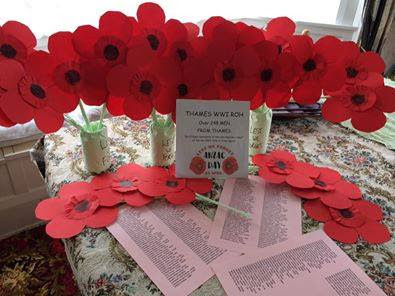 Poppies made for the window.
Twenty five flowers each representing ten Thames soldiers who lost their lives in WWI.
**So far over 248 names have been identified for the Thames ROH list.**

Just before 6am, the people of Thames joined the plea to 'stand at the gate' and remember the men and women who served / serve in the defence forces. The Last Post played on street corners via mobile phone and radio. In those moments we all realised the gravity of the situation - this is what Covid-19 had done to us all, we could not commemorate our 'special' day.

The Thames RSA recorded an ANZAC Day Service for 2020, which is available to view on Youtube.

Now, for some sense of normality, we will step back in time and look at how Thamesites commemorated 25 April 1945 - 75 years ago. 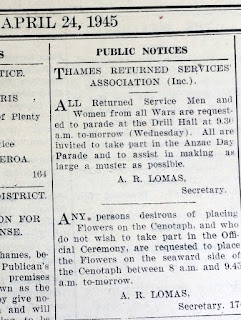 1945 April 23: The town had welcomed home 15 men who had served overseas. The men had travelled by train from Auckland to Paeroa, then bused to Thames. After a quick civic welcome, the men were reunited with family who they had not seen for years. There was also news that prisoner of war Sergeant Jack Cameron of Mill Street, was now safe in England.

1945 April 24: Notices were placed in the Thames Star newspaper by the Thames Returned Services Association informing residents of the proceedings for the following day. All returned service men and women were asked to meet at the Drill Hall in Mackay Street at 9.30am to prepare for the march.

A full article in this edition reminded folk that this was the thirtieth anniversary of the Gallipoli landing. Other groups had been invited to take part in the parade, including: home servicemen, Air Training Corps, Women's Auxiliary, school cadets, boy scouts, girl guides and school representatives.

The pupils of Thames High, South and Central Schools held on the 24th, poppy cards were also sold to the pupils.

1945 April 25: (reported in the Thames Star 26 April). There was a good attendance at the ANZAC Day parade, floral tributes were laid at the temporary cenotaph at the corner of Cochrane and Pollen Streets. Mayor Sid Ensor presided over the service inside the King's Theatre. The marshall of the procession was Major S L Smith.Other s in the official party included Mr W R McNeillie (president of the RSA), Mr F C Tuck (Town clerk), Mr S Hira (Ngatimaru rep) and Rev E T Olds of Auckland.

Rev Olds the principal speaker at the service, had served in WWI. He spoke of the 1914-18 war, and that sadly World War Two was inevitable given the happenings in Germany. Sadly it was a betrayal to those old Anzacs that another conflict had broken out. "All they fought for seemed to have been lost in the great cataclysm of another war...Our job was to win and keep the peace." 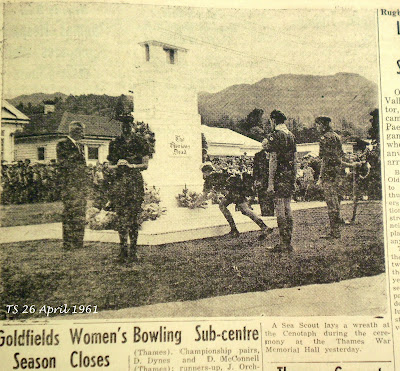 ABOVE: This appears to be the temporary cenotaph that was still in use for the last time in 1961.
The following year a new cenotaph was erected outside the Thames War Memorial Hall in Mary Street.

The Thames Star 26 April reported the sad news that a Thames soldier had been Killed in Action in Italy, 15 April 1945. Private Patrick Colin was the son of the late A J Brien and his mother was Mrs M Robinson of Waiotahi Road, Thames. 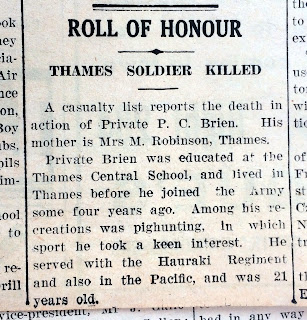 UPDATE 5 May 2020
Many thanks to Althea & Sonia for taking the time to lay wreaths on Anzac morning, at the Thames War Memorial Civic Centre. Special thanks to all involved. 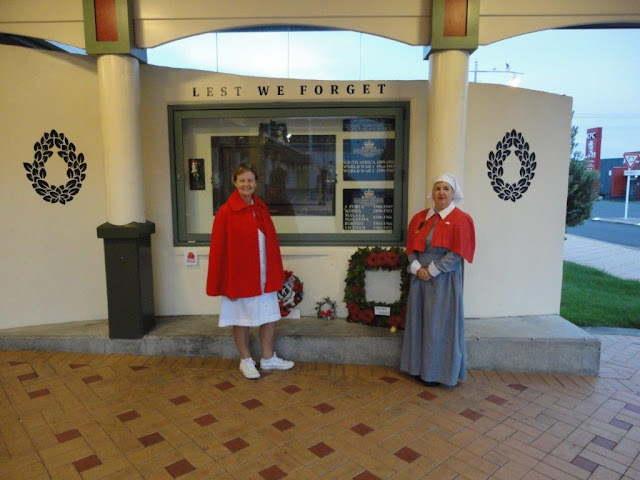 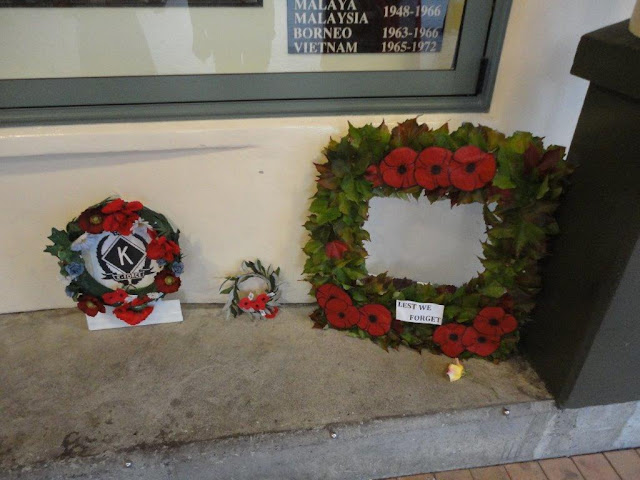 Lest We Forget
Posted by Althea at 8:39 PM