Street letter boxes or letter receivers as they were called were installed to provide an easy way to post letters. If the sender had purchased postal stamps, it saved them a long trek to the Shortland or Grahamstown Post Office branches...North or South Office as they were sometimes called.

DESIGN: Thames (Shortland and Grahamstown) had the very distinctive red pillar boxes, that were used at several other locations in New Zealand. Thames residents had suggested the design that they had seen in Australia. "Based on the French design they 'had three vertical apertures placed near the top of the receiver, which was the height that a person on horseback could post a letter, without having to dismount."(1) It is believed that the Thames boxes were designed and made based on the British model by J H Penfold. The Queen Street box has the maker's name as BUBB & SON, Victoria Foundry, Sydney. 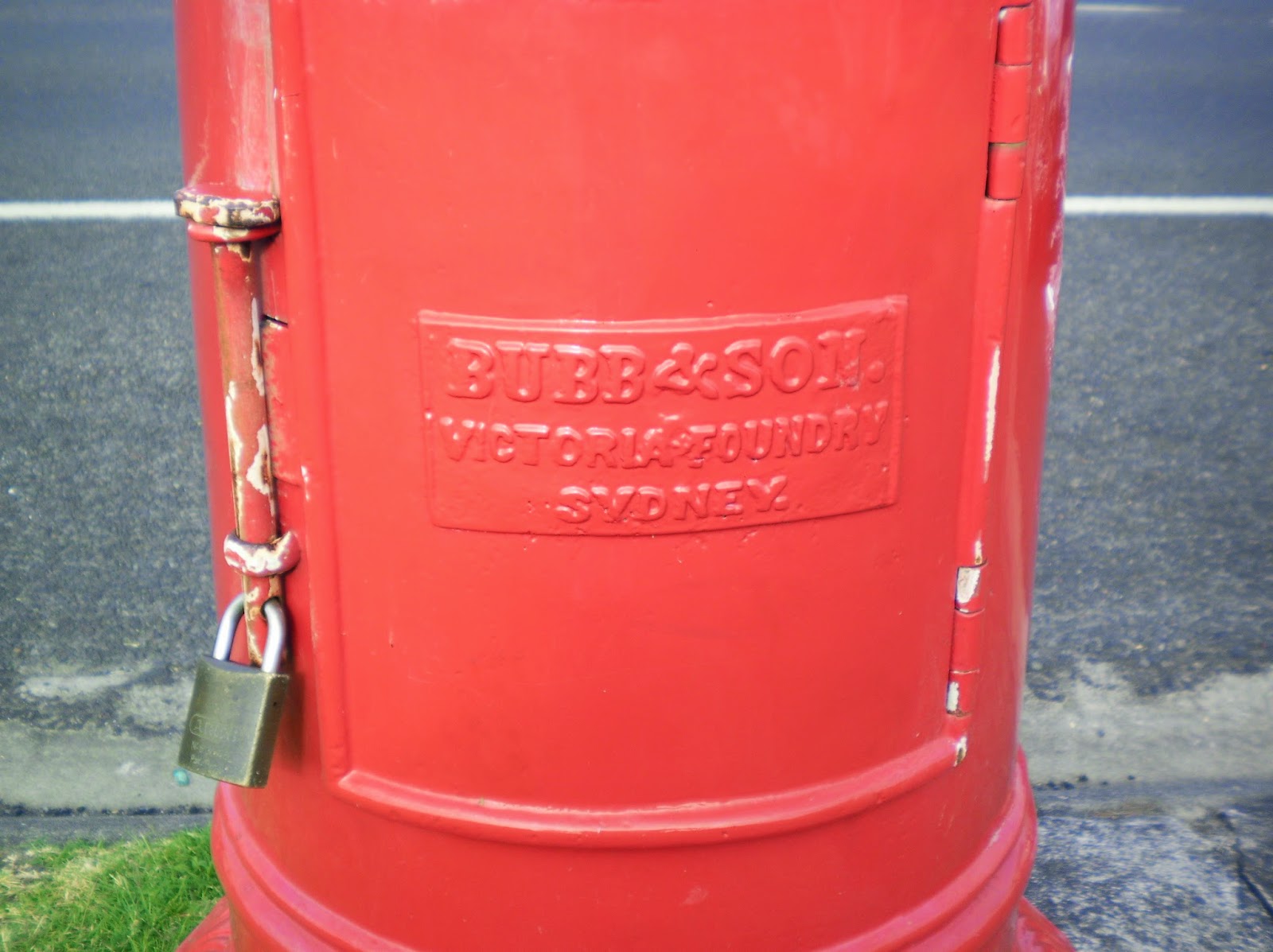 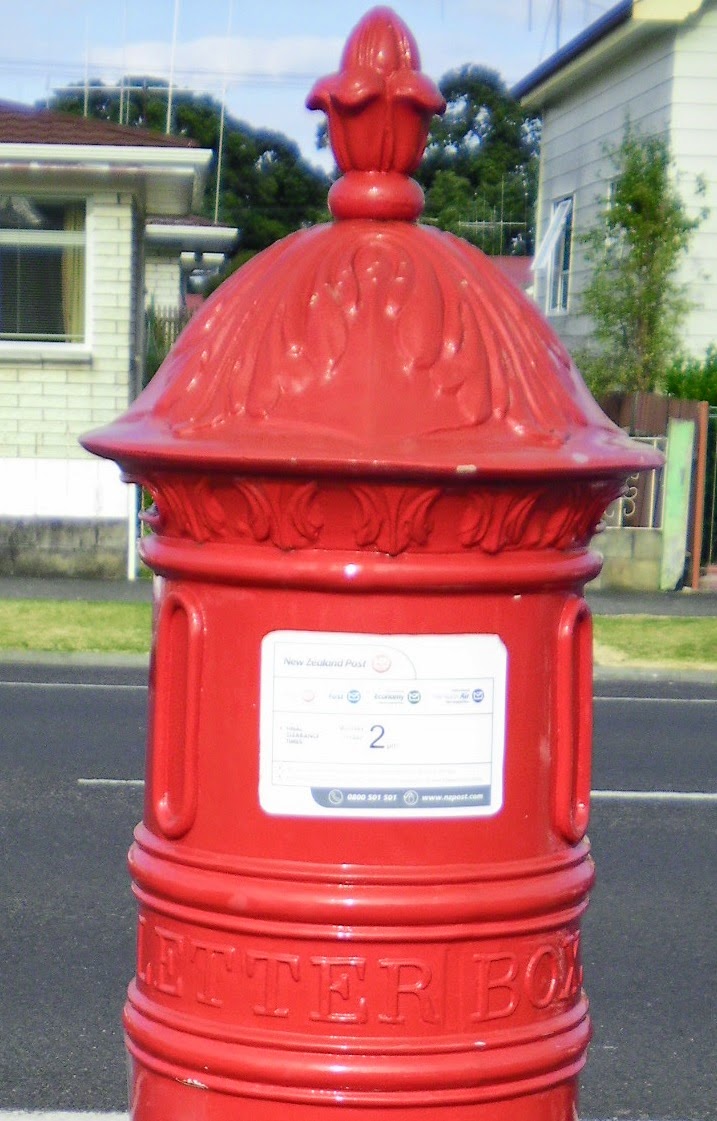 Close-up views of the Red Pillar Box at Queen Street, just north of The Treasury - on east side of street.﻿ 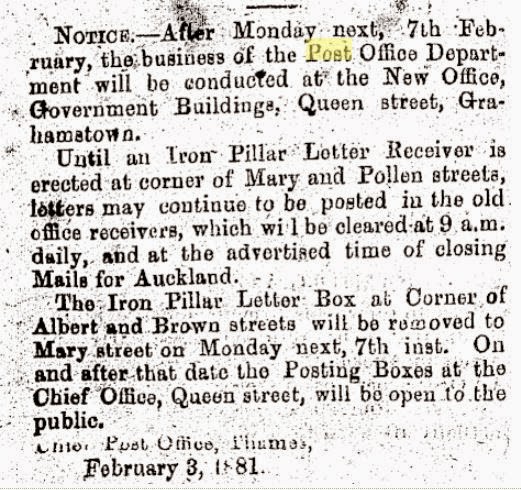 LOCATION: Over the years Thames had more than the three boxes that remain today.  They were located at places such as: Owen Street, Mary Street, Willoughby Street, Shortland Railway Station, Fenton Street, Richmond Street, Kuranui, Tararu. The Pillar Boxes are mentioned in Thames newspapers from about 1880, and were occasionally moved to different locations.

In 1881 the one at the corner of Albert and Brown Streets was moved to corner Mary and Pollen Streets on 7th February1881. (notice right)

In the Thames Star 17 February 1894, there is an advertisement concerning mail clearance that names the pillar letter receivers at Shortland as being at: Rolleston, Willoughby and Mary streets. The Rolleston Street one was on the south corner of Richmond Street and had been erected September 1878. (Thames Star 13/9/1878)

PRESENT DAY: Today three Red Pillar (Post) Boxes are in Thames and they have a Historic Place’s rating of Category 2. Their historic register numbers are: 717 (Pollen Street), 7242 (Cnr Mary & Pollen Streets) and 7244 (Queen Street). All these boxes have been moved over the years.

Below left is the one by the Salvation Army Hall, at the Grahamstown end of Pollen Street. This was previously located on Willoughby Street, near the Pollen Street intersect - some will remember as Coakley's corner, with Coakley's Grocery Store on the north-east intersect. 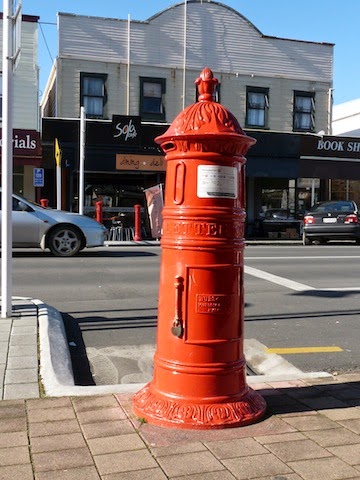 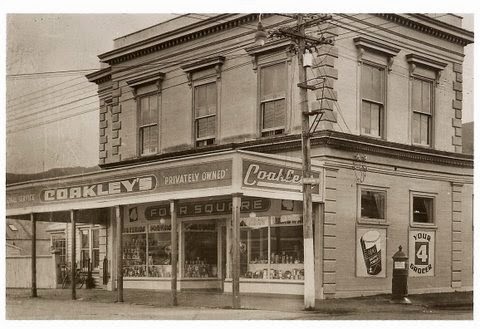 The Pillar Box that is on the corner of Mary and Pollen Streets, on the south-east intersect, has also travelled over the years! It probably was the one that moved from Brown & Albert Streets in 1881. Then as redevelopment has happened to the area, it has been placed nearer Pollen Street, whereas a 1917 photo shows it was  a few feet east on Mary Street. (photos below)﻿ 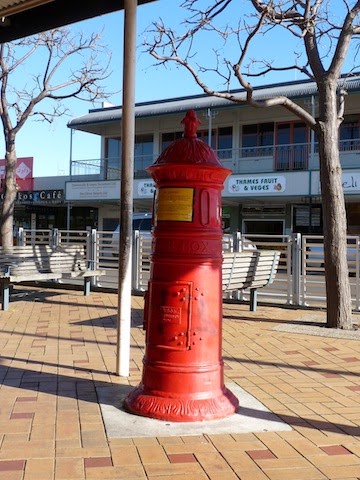 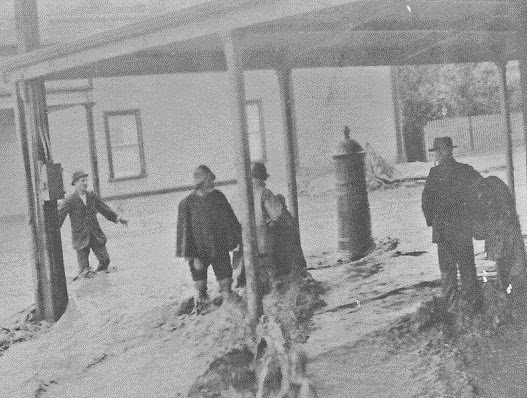 The third surviving Pillar Box is on Queen Street, near the location of the old Grahamstown Government Buildings. I can't see this box in early photographs, so at this stage speculate it is another that was moved from a previous location. Below are two views, on the left looking west, and on the right, looking south at the Pillar Box. 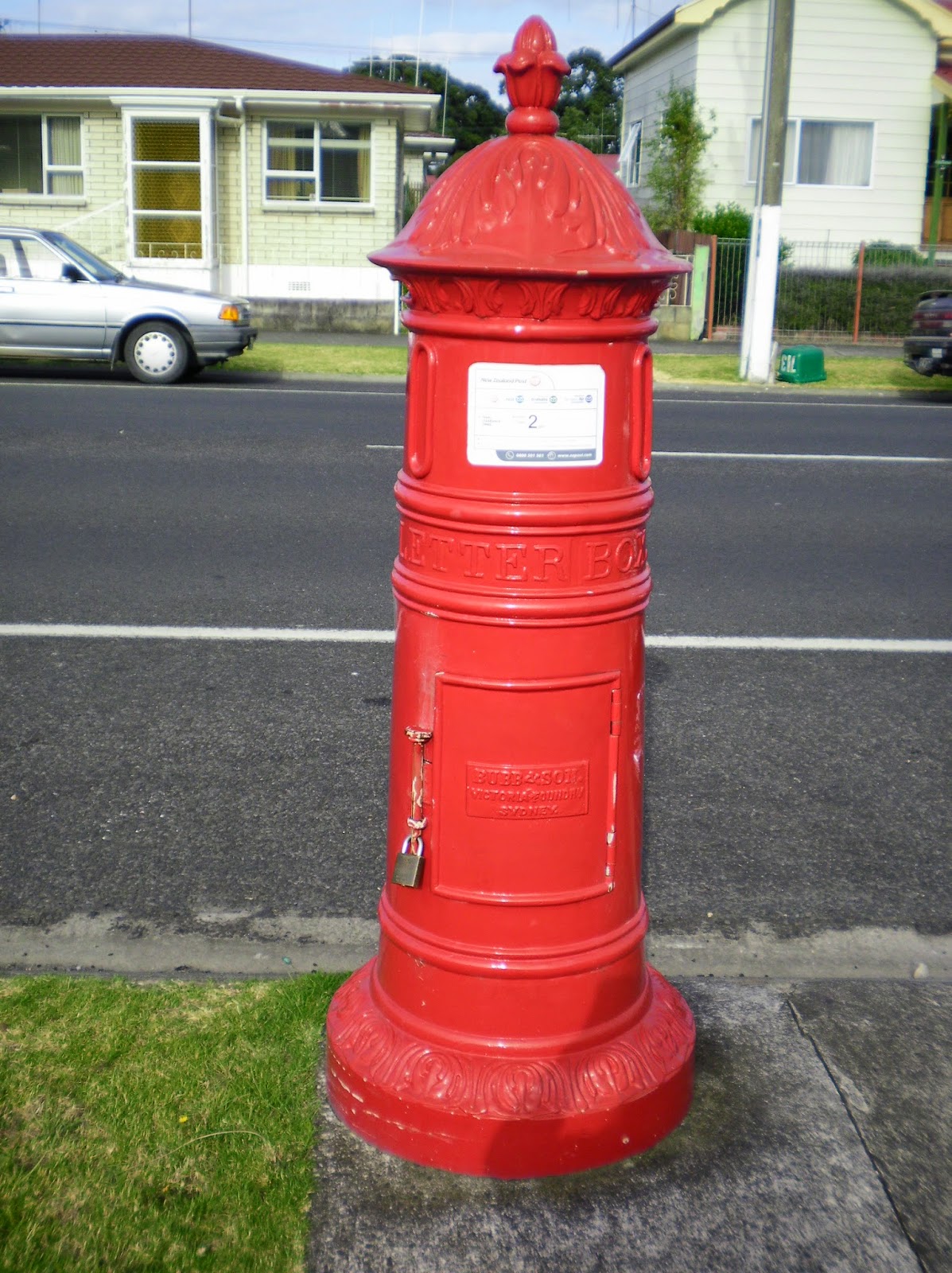 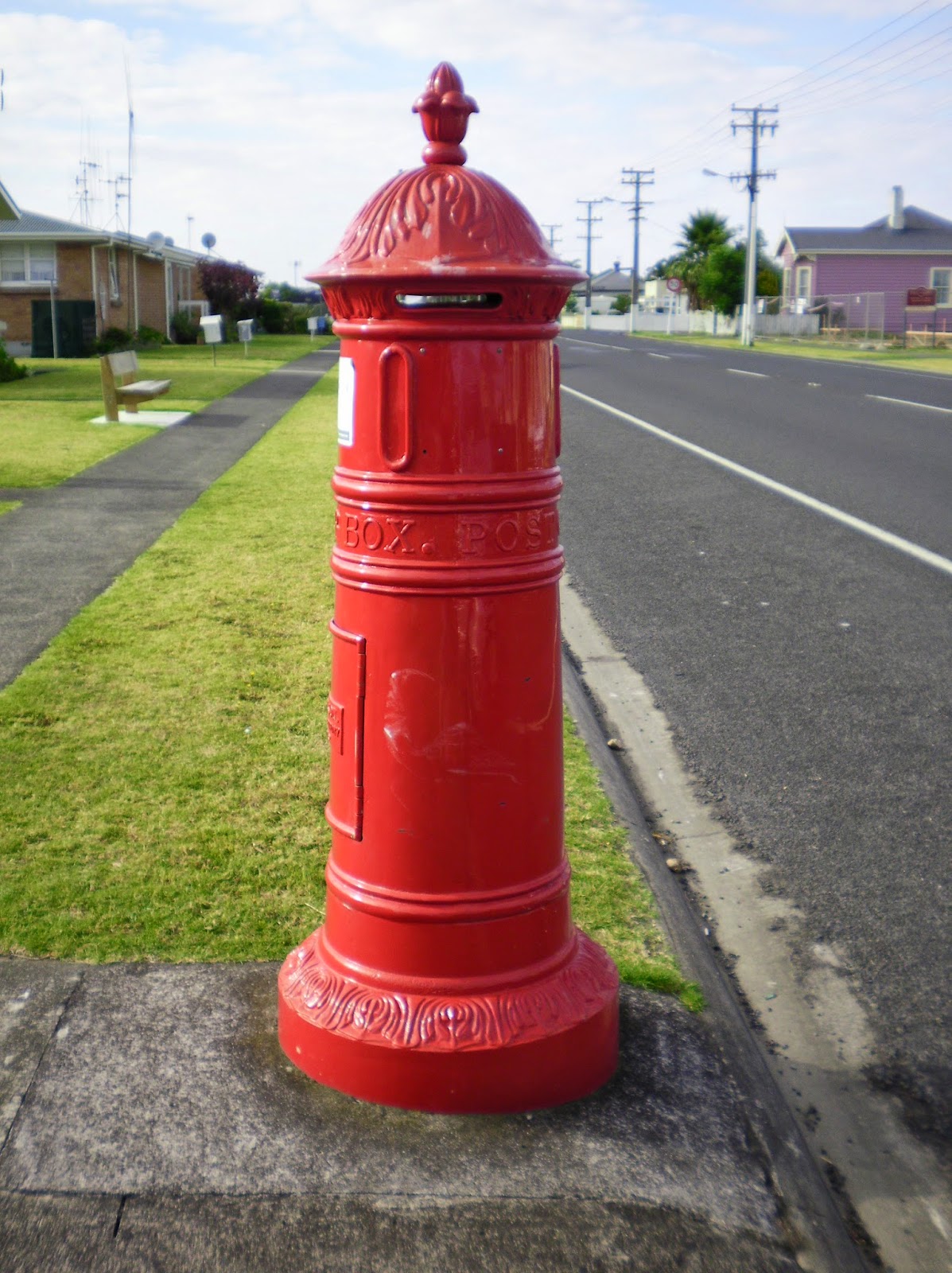 CLOSING: The Pillar boxes are a small reminder of our rich past. The early settlers of The Thames were prolific letter writers, sending news back home to family in their country of origin. Having these letter boxes hand, would have been invaluable. As the volume of mail decreases, let us hope that the boxes stay and remind us of the life before the internet!
Reference: Thames Firsts by Althea Barker & TCDC Heritage Reports by Dr A McEwan
Posted by Althea at 1:58 PM