Batteries of the Hauraki District

At the Treasury you will find two new folders on BATTERIES OF THE HAURAKI DISTRICT.  A work in progress aimed at gathering information about the stamper batteries that existed on the goldfields. A growing resource gathering what information is available, where to find photos and details on the batteries.

It has been a massive learning curve! Family researchers often find it hard to find out info on their relatives mining endeavours, hopefully this is a start to making the process easier.  The key being, that we welcome contributions from anyone who may have information on batteries (and also Claims and Mining Companies).

Note that terminology changed and BATTERIES/STAMPER BATTERIES, could also be called MACHINES or MILLS, plus there were also TAILING PLANTS. The Te Ara site has a wonderful video of a stamper in action; one can only imagine how deafening the noise must have been in Thames township at the height of the mining boom! Also explained at the Te Ara site is how the gold on the Coromandel was generally processed:
Machines called stamper batteries, which crushed quartz into powder, were set up in the Coromandel ranges. Most mines were steadily producing ore, but the recovery methods were highly inefficient (only 45% of the gold and barely any silver was recovered).

﻿ A side effect of having all these batteries and all the potential GOLD was robbery!! The papers have examples of attempts both successful and unsuccessful of gold robberies.

I'm at present compiling an index covering mining batteries, claims and companies. In doing so, it reminds me that so often we forget to look at the most obvious resources. I have been busy indexing books written in the late 1900s and failed to remember the wealth of information available in the Miner's guide by Edward Clarke.  This is available online at Auckland University but I have a preference for reading a real book!! (Thanks to Cadsonbury Publications, the reprint makes an excellent read )

Page 93 has a section on the machinery at the goldfields:
"The first Mill erected on the Thames Goldfield was called the Great Expectations. It commenced working about November 1867, and consisted of four wooden stampers, shod with plates of iron, the whole worked by a donkey engine. The machine is not now working, it having given place to larger and more efficient machinery." 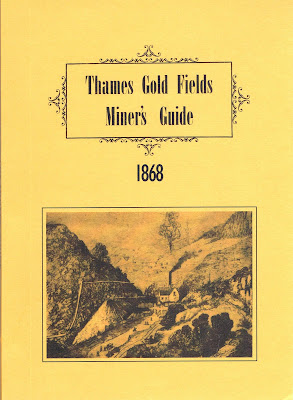 There have been many excellent books written on Thames that are of interest to those with a history and genealogical interest. An old list that I assembled is available here. Also The Treasury has a list of just a few they have available and the Thames Library has a searchable catalogue.

Recently several people have asked about the availability of Downey's mining book on the Hauraki District. Reprints of this and several other books are available from Cadsonbury Publications. Downey's Gold Mines of the Hauraki District, Clarke: Thames Gold Fields Miner's Guide and Grainger's The Amazing Thames. The company can be contacted by email: cadsonbury (at) xtra.co.nz 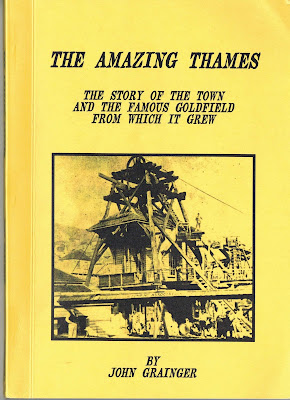 John Grainger's book is a particular favourite, he was passionate about the preservation of Thames history. An article about Grainger is online at The Treasury.
Posted by Althea at 9:21 AM

A list of Thames street names has previously not covered an alternate name for Tararu Road, Thames. At Papers Past there is mention of O'Neill's Esplanade and it appears to run along the waterfront from the Brown Street area to Tararu. There was discussion in 1874 about extending this esplanade to Shortland Wharf.

Interestingly there is also mention of another esplanade called Brodie's Esplanade, part of the Waiotahi Road, just above the Golden Age Hotel.

In A M Isdale's unpublished notes on "Tararu and Tararu Valley" and "Dickson Park and its neighbourhood history" (1) (copies at The Treasury) there is more information on the esplanade, known as O'Neill's. Charles O'Neill was a Member of the House of representatives for Thames in 1871 and the esplanade was named after him. Tararu was at that time popular for pastimes such as race meetings, visiting the Tararu Gardens, as well as the busy Tararu Wharf.  Many houses began to be built at Tararu and there was increasing demands for a road connection  between Tararu and the town. "About 26th November, 1870, the Native owners granted...for the purpose of a road, a strip of land and sea beach from the Karaka Creek to Tararu some 66 feet wide...the road is too narrow even at 66 feet to accommodate footpath, roadway and Tramway, along O'Neill's Esplanade or Tararu Road." (1) It was finally noted that at the end of 1872 the road was completed. Part of this construction involved the rock wall just past the old Tararu School on Tararu Road (now the Arts Centre)

It was reported in the Thames Star 24 December 1892 that Charles Gordon O'Neill later moved to Sydney, Australia. There are several biographies on the internet, that expand on the life of O'Neill, including one on  the Encyclopedia of New Zealand site:

[Charles O'Neill] moved to the Thames district in 1868 where he was appointed a mining surveyor for the Thames goldfield and engineer-in-chief of railways, tramways and wharves. He designed the goldfields' tramline. In 1869 he was appointed provincial engineer and chief surveyor of the goldfield and the same year was made a justice of the peace. In 1871 he surveyed and reported on a proposed railway route across the Rimutaka Range. In 1874 he was a member of a royal commission which inquired into a boiler explosion at the Kurunui battery on the Thames goldfield in which three people were killed. From 1866 to 1870 O'Neill was MHR for Goldfields, Otago, and from 1871 to 1875 represented Thames. His main legislative concerns were the provision of reserves, the widening and regulation of streets, and that all plans of towns should be approved by the governor before land went up for sale.

Life on the Thames Goldfields

Many of the miners were immigrants from other countries which included England and Ireland, with many of us descended from Cornish miners. Some came alone and others with their families. Life was tough during those early years after the field opened in August 1867. Maybe they lived in a tent, punga whare or were lucky enough to live in a small miners cottage.

My maternal grandmother's Grandfather, Great-grandather and Great, Great Grandfather all arrived in the 1870s, with their families.  The Vercoe's lived up to the left of this photo, in Hill Street, which was part of Block 27. As the rain falls today, spare a thought for what the living conditions would have been like for the families of the early goldfield years.
﻿﻿﻿
﻿﻿
Posted by Althea at 3:29 PM

Researching the mines of the Hauraki District is a definite reminder of how little I know on the topic, but also the magnitude of the mining operations that were taking place all across the Coromandel Peninsula in the pre 1900s.

An interesting character is that of SAMUEL ALEXANDER, who was often called at the time, FATHER OF THE THAMES GOLDFIELD and FATHER OF FORESTRY. Mr Alexander who claimed the reward of £5000 for the discovery of payable gold at the Thames

The Cyclopedia of New Zealand, Auckland Volume 2 reports what happened:
"In the month of July, 1867, Mr. Alexander was on the Thames, and found his way up the Kuranui Creek, then surrounded by dense bush, including supplejacks. Having discovered a small waterfall about 10 feet high, he climbed to the top and scooped up some of the loose stuff. This he carried out to the open, and on panning off the dish, discovered a rich prospect of gold. The prospect was immediately taken to Auckland by Mr. Alexander himself, and when crushed there by him, it yielded 21 pennyweights of gold. On this circumstance Mr. Alexander based his application as the discoverer of gold. The ground on which he found specimens was afterwards well known as Hunt's Claim. Mr. Alexander afterwards alleged that it was originally arranged between Hunt, Clarkson, and himself that he (Alexander) should have a full share in the mine as the fifth shareholder in six men's ground, but that Hunt had sold that share to other persons before Alexander had had time to register his interest. "

The papers have reports concerning Mr Alexander's attempts to claim the reward money for discovering the goldfield, this does not appear to have been viewed favourably. (Thames Star 9/4/1887)

Mr Alexander's death is reported in the Thames Star Newspaper 22/9/1902, an old respected resident who passed away aged 74 years. Samuel Alexander was buried at Shortland Cemetery, PUBL-PLOT-1463. (No headstone remains)
Posted by Althea at 9:40 AM

A review of the information on Thames Hotels has been completed, with the discovery of yet more hotels!! The licensing committee minutes that were published in the newspapers make interesting reading, with many applications refused.  Obviously everyone wanted to own a hotel, the gold was gone in many cases - so a career in the hotel business possibly seemed a great alternative!

At The Treasury are 2 new folders devoted to hotel/publican news via the Licensing Committee meeting reports that appeared in the 'Daily Southern Cross' and 'Evening/Thames Star' Newspapers. These have been indexed and cover hotels all over the peninsula, not just Thames.

To accompany this new folders are being established that have an updated summary for each hotel (too many pages to go online), and a space where future articles/news about the hotels can be filed.
Do you have any family connection to a Hotel in Thames? - if so I would love to hear from you. Particularly from the 1920 period to present day, so that publicans names can be added. Any photos? Please let me know or leave at The Treasury, Thames.

Here is the latest list of hotels for Thames, New Zealand:
INDEX

A few new articles online via The Treasury website.

There is also the full article on MATRONS OF THAMES HOSPITAL. An amazing group of women, who dedicated themselves to the service of their patients and the hospital as a whole.