Well this week brings real new look to the site and the reality that an archives building is not to far off.
Great progress can be seen from the photos taken today. 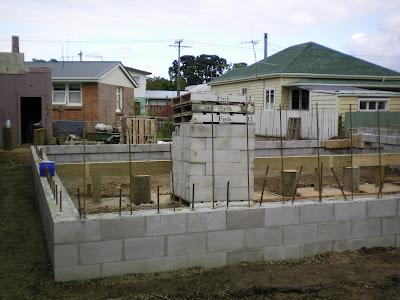 The original name of the bay was Ō-Tohi. At the end of WWII the European settlers of this new community were looking for a name acceptable to all. Lieutenant Te Moananui-a-Kiwa Ngārimu of Ngāti Porou was “awarded a posthumous Victoria Cross.” The residents got the approval of his parents to name the bay after their son to commemorate his bravery.


The Maori Television Channel had a programme on Ngārimu VC -- if you missed it, take the time to find about the man behind the name of our popular Thames Coast bay.   Te Moananui-a-Kiwa Ngārimu from ‘C’ Company, 28th Māori Battalion, was killed in action in North Africa and was posthumously awarded the Victoria Cross – this is his story.


The Treasury at Thames has an oral history recording by Mr Toss HAMMOND MBE, who tells the story of the naming of the bay..a snippet follows:

..."So one day Mrs Young, the wife of  Mr John Young who was on the committee, she came to me and said “I have an idea about naming that domain. What about calling the thing Ngarimu Domain? There’s that young fellow Ngarimu Te Moana-Nui-A-Kiwa that’s just been awarded the first Victoria Cross that’s been awarded to a Maori. What about naming it after him?”
Mr Hammond goes on to explain the process that was involved and the contact with the relatives. The rest is history - now we know the place as Ngarimu Bay, but let us not forget the man and the story behind the naming of the bay. 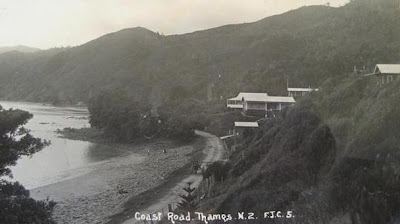 Since 1916, Thames like other towns all over New Zealand, has stopped to remember...
The first public ANZAC Commemoration Service was held in the Central Hall in Pollen Street, at 7pm on the 25th of April 1916. The Regimental Band, Territorials and Cadets meeting at 6.30pm at the Drill Hall in Mackay street; before proceeding to the Central Hall service. The evening included prayers, speeches and hymns – along with the National Anthem.  The Last Post was played by Bandsmen Dash and Robinson; while Gunner Wood, who was shortly leaving for the front, played the organ.
(From: Thames Firsts by A Barker)

Over the years, hundreds of men (and women) have gone to war and as the memorials record - there were a number who did not return. May each and all be remembered tomorrow, Thursday 25th April 2013.
﻿

Charles Ludwig came to New Zealand from Danzig, Germany. Charles or Karl was an early settler of Thames, who worked as an amalgamator. He was naturalised in 1887:
Oath of Allegiance: "I Charles Ludwig do swear that I will be faithful and bear true allegiance to Her Majesty Queen Victoria, Her Heirs and Successors, according to law. So help me God. (signed) Charles Ludwig."
Sworn at Thames this twenty sixth day of August 1887

Recent contact with a fellow researcher, has meant I have re looked at the information I have on the Ludwig family. It serves as a reminder to all..go back to your family trees and recheck: Newspapers at Paperspast (in particular Thames Advertiser/Star and Auckland Star), family trees at ancestry, The Treasury Database, Electoral Rolls and Street Directories..there is new information available all the time as sources are updated and files indexed.

Charles married Mary GILLARD on 4 July 1965 at Onehunga. They had nine children and lived at Tapu and Thames. Charles Ludwig was buried at Tararu Cemetery - no headstone remains today. He was one of three deaths reported in the Thames Star 5/12/1906 - interesting that all requested that there was to be NO MOURNING 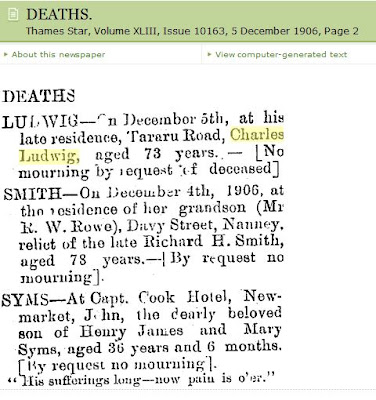 P.S. Would love to hear from anyone with a photo of Charles Ludwig 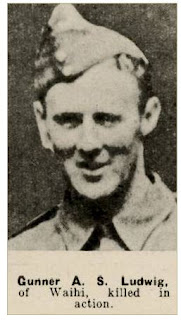 As the long hot summer has drawn to an end, I wonder how many fish have been caught in the Firth of Thames.
Was it a good year for fishing?
Well, in 1905 there was no shortage of fish, as the photo below shows a catch of 1500 dozen fish were being processed at Thames! (Taken from the supplement to the Auckland Weekly News 26 October 1905 p012)

Keep checking back to the Auckland Libraries Heritage Image website, you will be amazed at the number of new images that keep appearing. They remind us of things long gone...or refresh faded memories.

How many knew of the major market gardens that were at the Thames of old. Perhaps the photo below is of the gardens south of the Kauaeranga River crossing - while others existed on Shortland flat, up on the hills of Mt Pleasant, or out at Parawai. The image below was taken from  the supplement to the Auckland Weekly News 25 February 1909 p015 - Description: Tomato growing in New Zealand: a fine orchard plantation of 8000 plants in full bearing at the Thames, Auckland.

Sport played an important role in the early history of Thames, during times of hardship giving a place to relax and mix with others - for both the players and their supporters. The returned soldiers from WWI, also found it a way to continue their comradeship in sports such as football/rugby.

While at war in Europe, there are reports of teams playing at venues in France and England. Family report rugby games played by the men of the New Zealand Tunnelling Company, while they were serving overseas.
When the World War One soldiers returned home to Thames, they started playing in the local rugby competition. In the 1920s the team was called the Returned Soldiers Football team. Some of the players of the day were: M Dare, T Burrett, G Buchan, McNiece, H Jamieson, Chalton, L Smith, Houghton, G Crawford, Lomas, Cooke, Strange, J Stewart, J Finnerty, L Sutcliffe, Alexander, O'Carroll, C Burt, L Stewart, T Crawford, F Marson, P Rolton and J O'Sullivan.  (Thames Star 30/4/1920) 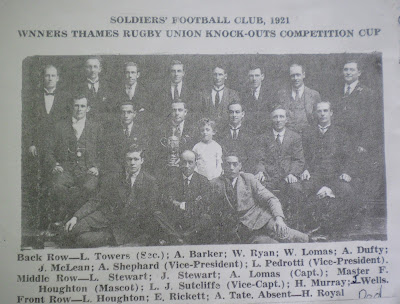