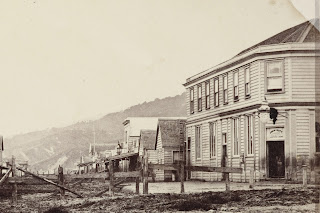 Just a quick post about 'ghost' figures or rather figures that appear as a blur in the early photographs of the Thames.

Now to one of my favourite (often revisited) photographs taken from the corner of Pollen & Grey Streets. Shortland Town (Thames).

Captain Butt's iconic Shortland Hotel, that stands to this day, although remodelled and rebuilt many times.

The street is a mess, typical of the streets on the Thames Goldfield - once the rain came they turned to a mud and bog.

A closer view, and you can spot the markings along the wall, particularly near the main entrance. I have heard all-sorts of explanations: Flood markings, horse rubbings, dirt from the road and so on. 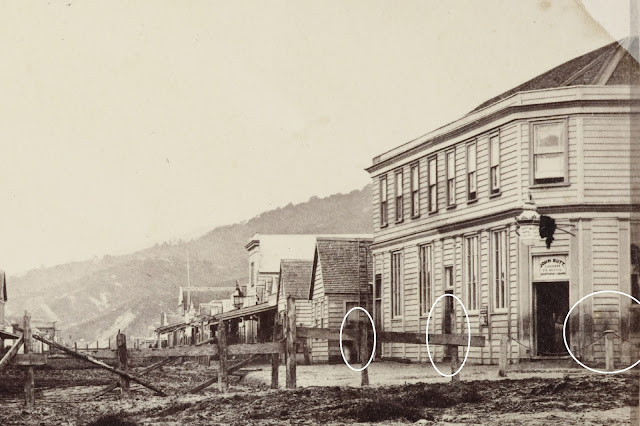 A glance today, and I saw the photo in a whole new light. The blurs now clearly (in my eyes at least) men standing outside the Shortland Hotel. The 'blurred' effect that they must have got sick of waiting and moved!? Anyway thats my new version of the 'ghostly' blurs outside Butt's hotel. 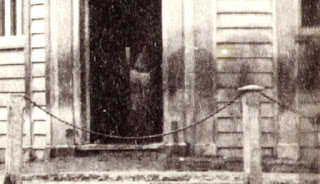 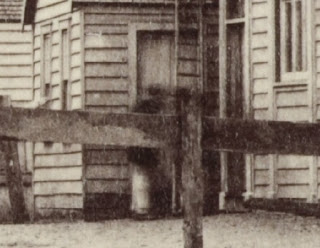 There are other examples we have looked at in previous blogs. Maybe you can find some more examples of "ghostly" images at The Thames?
Posted by Althea at 5:01 PM

Do you love looking at photos of the old Thames Goldfield?
Trying to recognise landmarks and where the photo was taken?
May be you have a favourite photographer? Maybe it is Henry Albert Frith.

Did early photographers take Panoramic Views of the Thames? There are examples where you see a wide angled view of the town, then find the photographer in question had taken several images to later 'join' them together.

There are two photographs by Frith of the Tookey Flat area, that are a great example of a photographer standing and taking an image - then turning to take another. 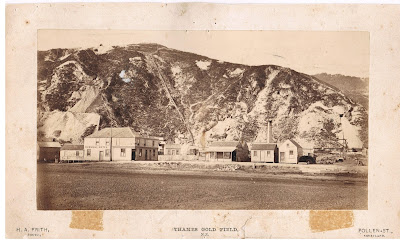 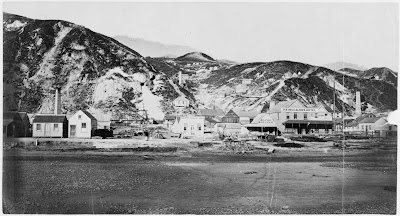 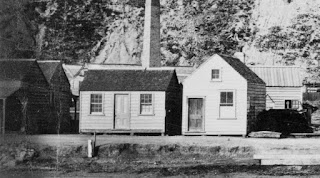 Snip from Photograph One (left) and Two (right)

Homework! Take the challenge. Look for photographs of Thames - find ones that can be combined to give a wider view of the town. This may help you identify landmarks and be able to see the town through the eyes of our ancestors.
Posted by Althea at 9:57 PM

Introduction
Perusing old newspapers is one of my favourite activities. While websites like Papers Past (New Zealand) rivals anything available around the globe, followed by Trove in Australia - nothing surpasses the opportunity to read the real thing!

In the New Zealand Memories magazine Issue 141 December / January 2020 is an article on Newspapers at the Diggings by Ian F Grant. Thames and the Coromandel area newspapers are discussed. Between 1864-1898 there were 87 goldfield newspapers - 28 in the Coromandel area. Grant remarked on the number of papers that were dailies, Thames for instance had [at least] five! Many of these goldfield based newspapers didn't last more than a year, influenced highly by the success or failure of the goldfield. 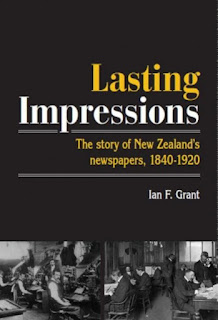 Newspapers in New Zealand
The author mentioned above has published a book that covers the history of Newspapers in this country. Lasting Impressions: The Story of New Zealand's newspapers 1840-1920 by Ian Grant (available at Thames District Libraries and for sale at Carsons Bookshop).

Lasting Impressions is a social history that places newspapers and their vital importance in New Zealand's development as a nation in the context of life in the communities they prospered or failed in. There are detailed descriptions of the beginnings of the newspaper business in New Zealand, the papers that spread throughout the country close behind the first settlers, the daily press's leap of faith, the proliferation of provincial papers, early twentieth century challenges, and the difficulties faced by World War One newspapers. For the first time in a newspaper history there are also sections on the burgeoning weeklies phenomenon, the distinctive goldfields press and the numerous Maori newspapers. Source: Carsons Bookshop

Chapter 31 (Pages 465 to 472) 'At the Coromandel' reviews papers in the wider area, but there are many mentions of Thames newspapers throughout the book.

Newspapers on the Thames Goldfield
Before the goldfield had its first newspaper, people relied on getting copies of in particular the Auckland papers, which no doubt were delivered via the many ships servicing the Firth of Thames. Those of you researching early Thames will find Auckland's Daily Southern Cross and the New Zealand Herald, kept everyone up-to-date with the latest news locally, nationally and abroad.

The following are Newspapers that were published at Thames pre 1900: 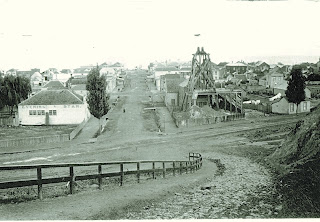 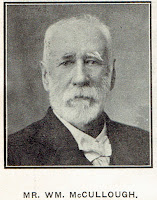 In 1870, James Hopcraft and William McCullough were in-charge of the newspaper and were located in Willoughby Street, Shortland Town. Later the Evening Star Office was located in Albert Street, near the intersection of Pollen Street in Grahamstown. In 1893 the name of the paper was changed to The Thames Star.

In 1912, McCullough took over the Thames Advertiser and it merged with the Thames Star - an iconic Thames newspaper that continued into the 1990s.

This was the first newspaper published on the Thames Goldfield, 11 April 1868. William Berry was an early editor of the paper, which was owned by William Wilkinson (1838-1921) and Claude Corlett (c.1836-1906). Initially published three times a week, it then became an important daily newspaper.

Corlett moved onto the Thames Guardian, while Wilkinson had several different partners which included Alfred Horton who later had the New Zealand Herald. Wilkinson sold the paper in the 1880s and it was purchased in 1912 by William McCullough who owned the Evening Star.

The Thames Exchange was a monthly Newspaper / periodical that was printed at the Thames Advertiser office. While initially monthly (2 October 1874), it was then published fortnightly, the owner was Mr J D Wickham. A review in the Thames Advertiser 5 October 1874, described the paper as "covering the news of the day and comments on local events are served up in a pithy, pungent form, which can not fail to be appreciated."

On the first anniversary, 1500 copies were distributed free to the subscribers in the district. (Grant page 467) In January 1879, Wickham who had merged the Thames Exchange and the Thames County Chronicle established and published a new Auckland Journal - the Auckland Free Lance. 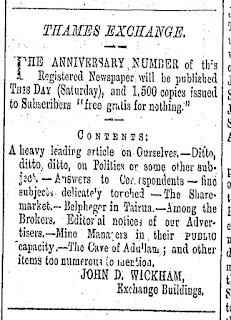 This publication was published by the Evening Star, a weekly newspaper that started 25 February 1875. (Grant page 466) It is unclear how long the paper lasted, the last advertisement in the Evening Star is on 6 April 1875. 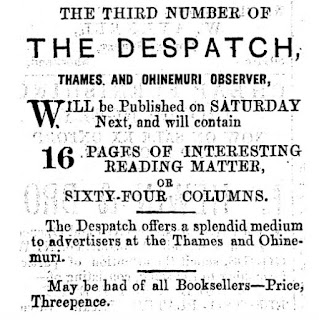 
The Thames Guardian and Mining Record

On the first day of publication (Saturday 7 October 1871), the paper outlined their stance on certain matters; including politics, free trade and native issues. The paper was started by Claude Corlett who was previously with the Thames Advertiser  - he left in 1870 and started up this new daily paper the following year.

The paper described itself in advertisements as an Independent and Liberal newspaper. The office was located at Davy Street / Albert Street in Grahamstown. The cost of the paper was twopence and it was sold via a variety of agents: Messrs Walters (Brown St), Carter (Brown Street), Jefferson (Pollen Street), Hall (Coromandel), Stevenson (Tapu), Upton & Co (Auckland), Greville & Co (Sydney), Gordon & Gotch (Melbourne), and Street& Co (London).

In September 1872, the paper finished publication. "The plant was sold to the proprietors of the Hawke’s Bay Times and Corlett moved on to the Christchurch Press, which he managed for a number of years." (Papers Past) The last edition online is Volume 1 Edition 290, Saturday 31 August 1872.

In 1868 William Shaw started the Times and Thames Miners' Advocate. Like many businesses on the goldfield, it prospered but then foundered. A 'Wharfdale' printing press had been used, originally bought by Shaw for 1200 pounds, on bankruptcy it sold for a mere 280 pounds. (pg 115, Grant) Jeremy Hartnett,was also involved with Shaw publishing this paper.

Newspapers provided a vital link for the wider Thames Goldfield community. Even more important than local news, the papers were a window to wider New Zealand and the world. The readers devoured all the news they could get, and appear to have been well versed in a wide range of topics.

Newspapers at The Thames were published initially a few times a week, then daily (except Sunday) - and there are two known titles (Journal / Periodical)* that were published  weekly, fortnightly and monthly.

While publications may have been owned by the same people (in different partnerships) the titles included:
You will find the book Lasting Impressions: The Story of New Zealand's newspapers 1840-1920 by Ian Grant a wonderful read - to skim over or go back and read sections in depth.  Quaint stories about pigeons flying to Auckland to deliver news of latest gold finds for the next publication! The main players in the newspaper industry are featured throughout the book and once again we can see that many of these men were at, or passed through the Thames during their careers.

While the opening statement from Grant's book / article states Thames had five newspapers - it is clear from the above list that if one were to count change of names then the figure rises to at least EIGHT 'newspaper' publications in the early days of the Thames goldfield (including the periodicals*). 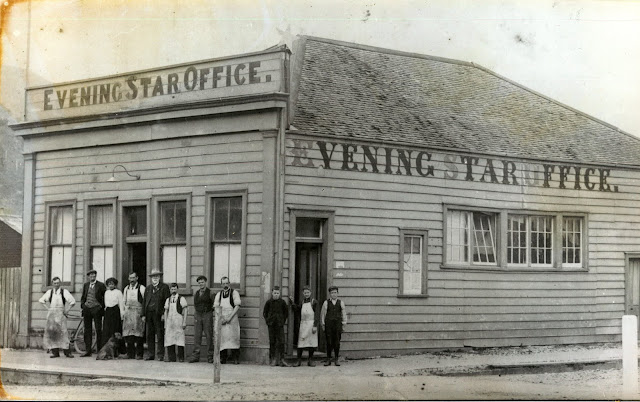 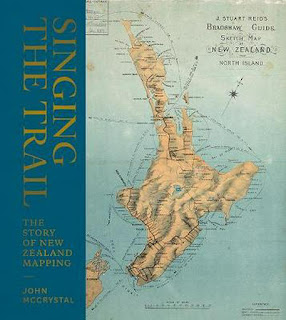 While the blog has featured maps in the past, the search for those specific to Thames is always of interest when trying to identify past and present locations.

There is a new book at Thames Library that looks at the development of maps related to Aotearoa New Zealand. Signing the Trail by John McCrystal is a magnificent book, although the weakness being the emphasis on the South Island...or maybe I was just hopeful for more related to The Thames!

Be prepared and have  a good magnifying glass handy when reading this book - otherwise you will find it impossible to peruse the information written / marked on the maps.

It was the cover map that intrigued me the most. It is
J. Stuart Reid's Bradshaw guide [cartographic material] : sketch map of New Zealand. The map is labelled 1885 and shows railways, coach roads, steamer routes.

Searching for Thames Maps
This is just a few of the online sites where you can find great maps of the Thames area - if I have missed your favourite, let me know and I'll add it to the list.
Posted by Althea at 8:56 PM

Just a quick shout-out regarding the New Years Honours List 2020.

I didn't recognise any Thames names (born / lived here), but if you did...can you let me know.

Remember, here is the historical list we have gathered so far:
https://thamesnz-genealogy.blogspot.com/p/blog-page_9.html
Posted by Althea at 9:06 PM