New blog page to keep an eye on, it is a work in progress - first step finally taken after years of being on the 'must do' list!  The page can be found in the top right column.


What are Thames' important dates? 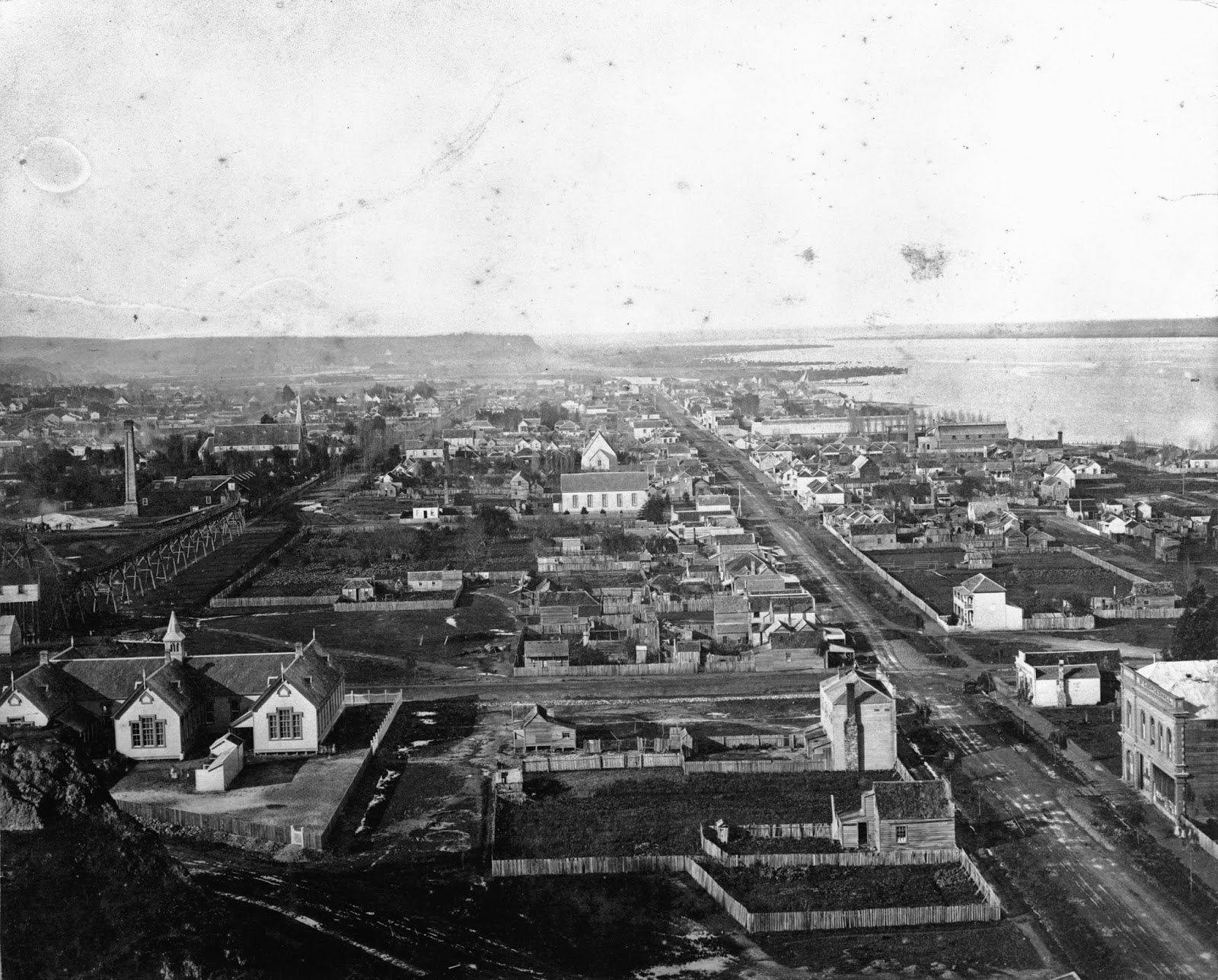 Even by Thames standards, this was a major flood. Described as a cyclonic storm, which resulted in three deaths, which included a man an Waiomo on the Thames Coast. The street in the photo is Albert Street, looking towards Queen Street at the far right. 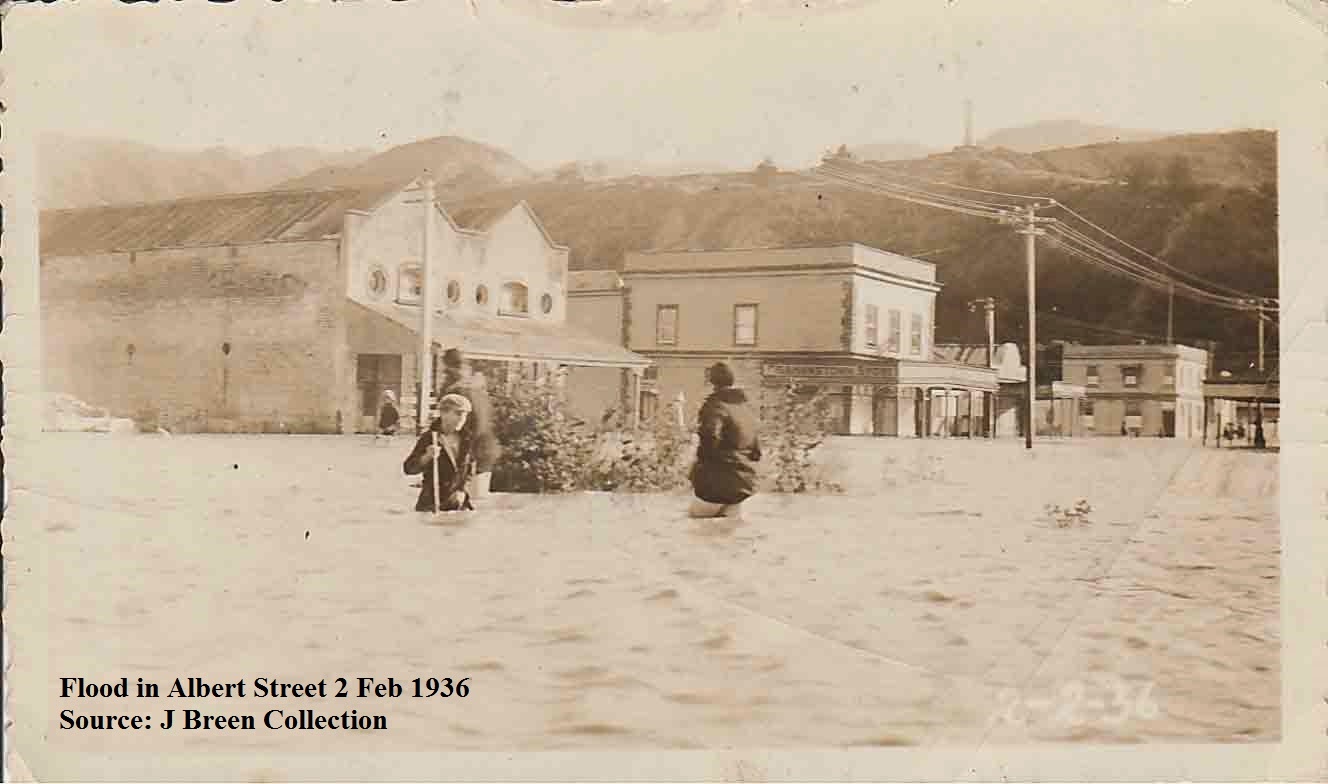 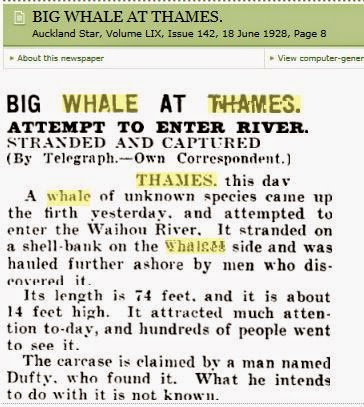 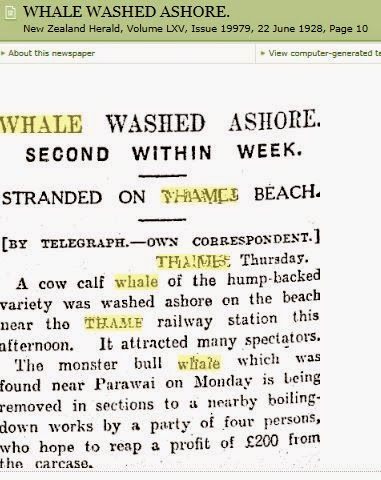 Another proud day for the management and worker of Price's Foundry. 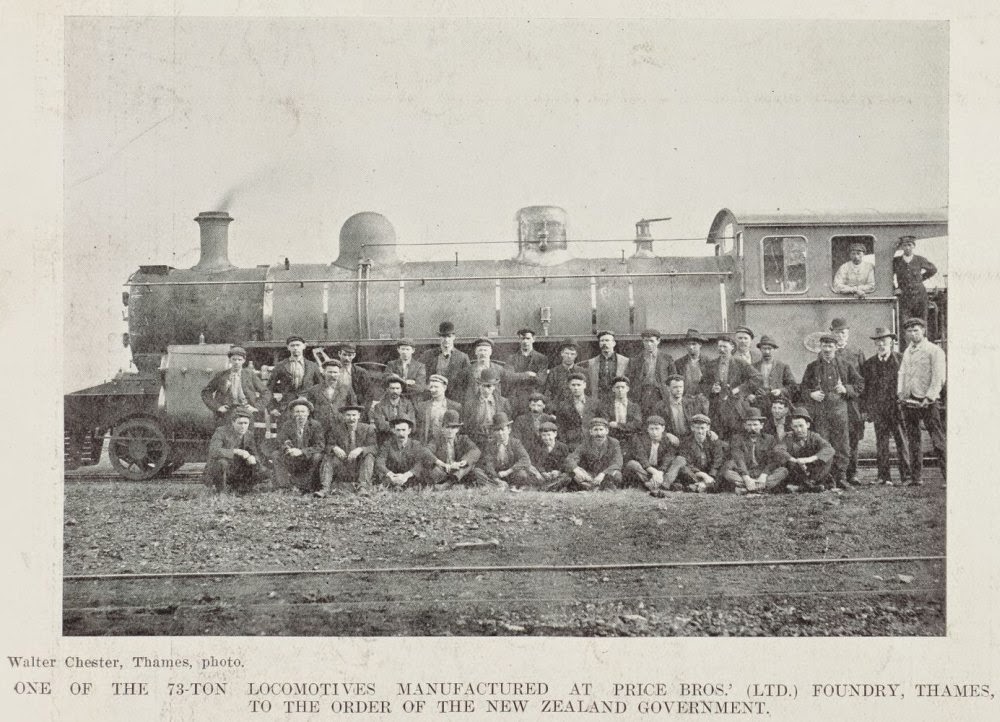 Looking for illustrations and photographs of early papakainga, maori settlements on the Thames Goldfields. There are some examples in the following books:
Waihou Journeys by Caroline Phillips
Thames & the Coromandel Peninsula 2000 years by Z & J Williams
Hauraki Contested 1769-1875 by Paul Monin

If you know of others or can direct me to photos and drawings on the net please let me know.

1. There is a Lindauer painting at Thames (NZ): Early Painting by Liardet

2. The drawing below is of the Puriri Mission Station May 1836. 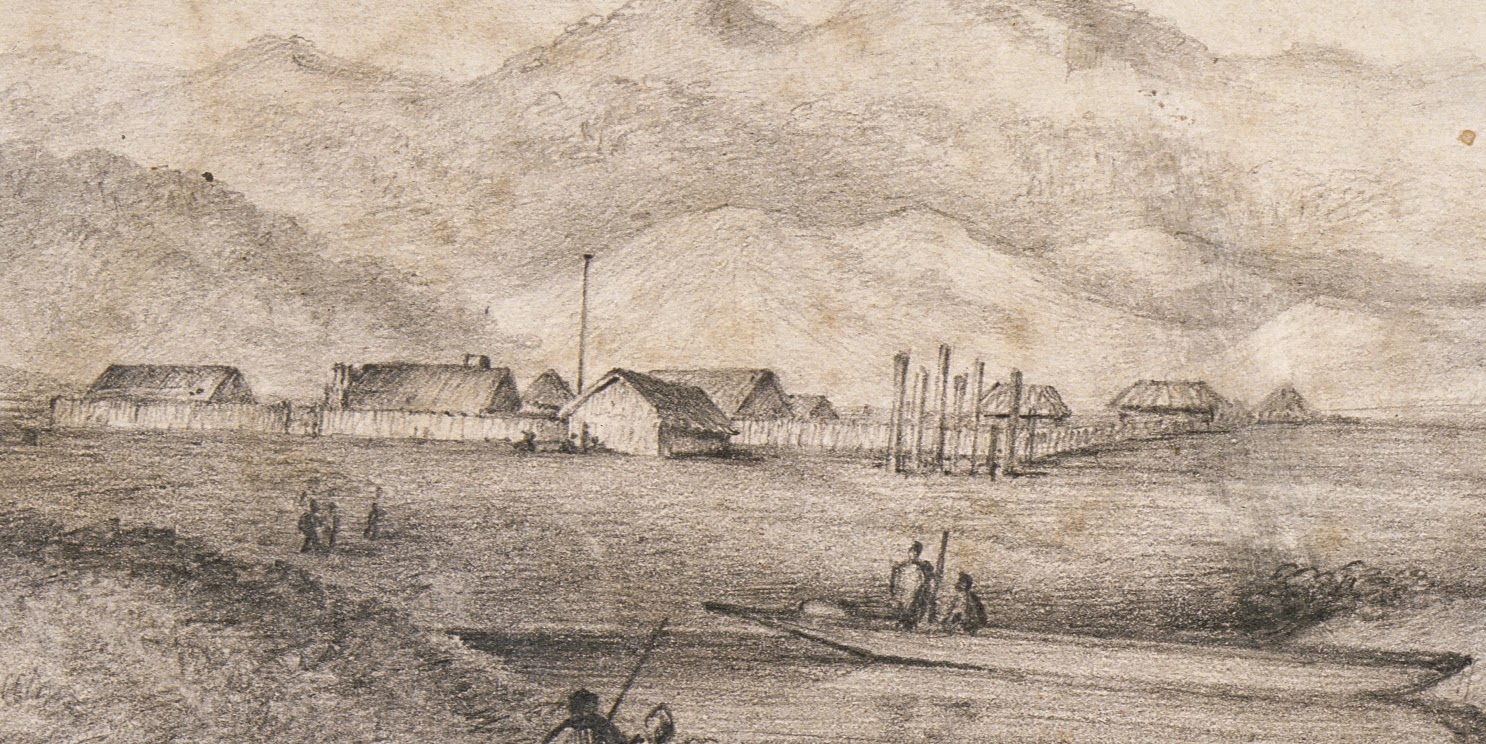 The full drawing is below. The description reads: 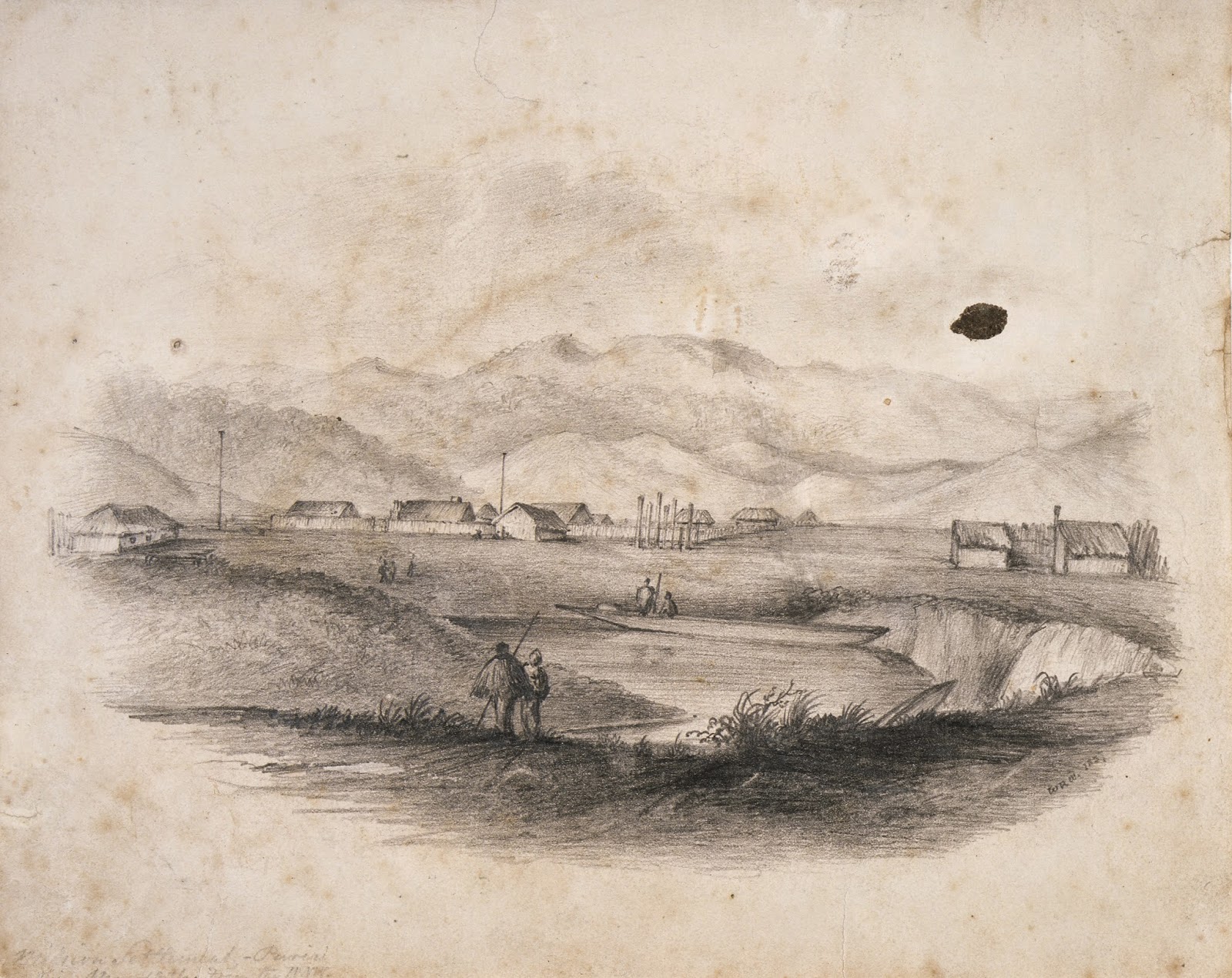 Mission buildings and thatched huts with Maori settlement in background, bend of river with canoe and several Maori in the foreground. Hills behind the settlement in the distance.
Inscriptions: Inscribed - Recto - beneath image, lower left: title. Lower right, at edge of image: initials and date.. Puriri was the station of Reverend John Morgan


3. Laishley, Richard, 1816-1897 :Maori at home, Thames, near Auckland, N.Z. 1887.    Description: Shows a Maori family in a bush clearing, their houses and domestic animals (pigs), around them. A group sits around a camp fire in the middle background. There is a kete (woven flax basket) in the right foreground. 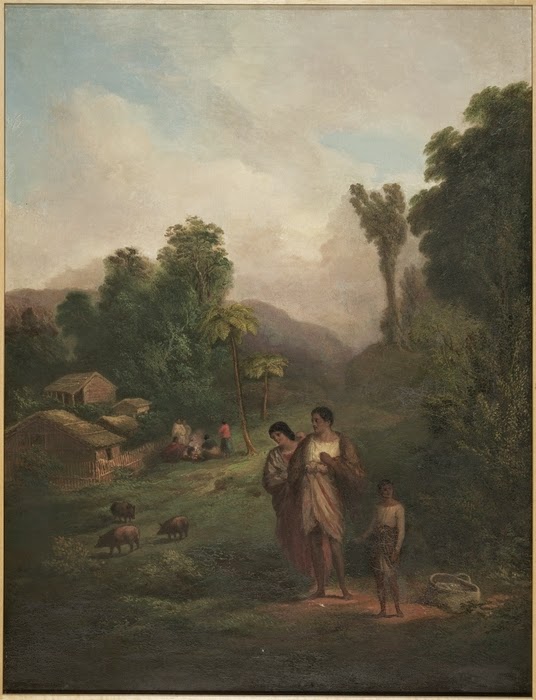 I have often looked at the photo featured here and just acknowledged that the House of Hotunui was in the distance but that there was nothing else to see apart from the front gardens. High resolution scans have meant that this is far from the truth and yet again a wealth of information can be found on a SECOND LOOK. 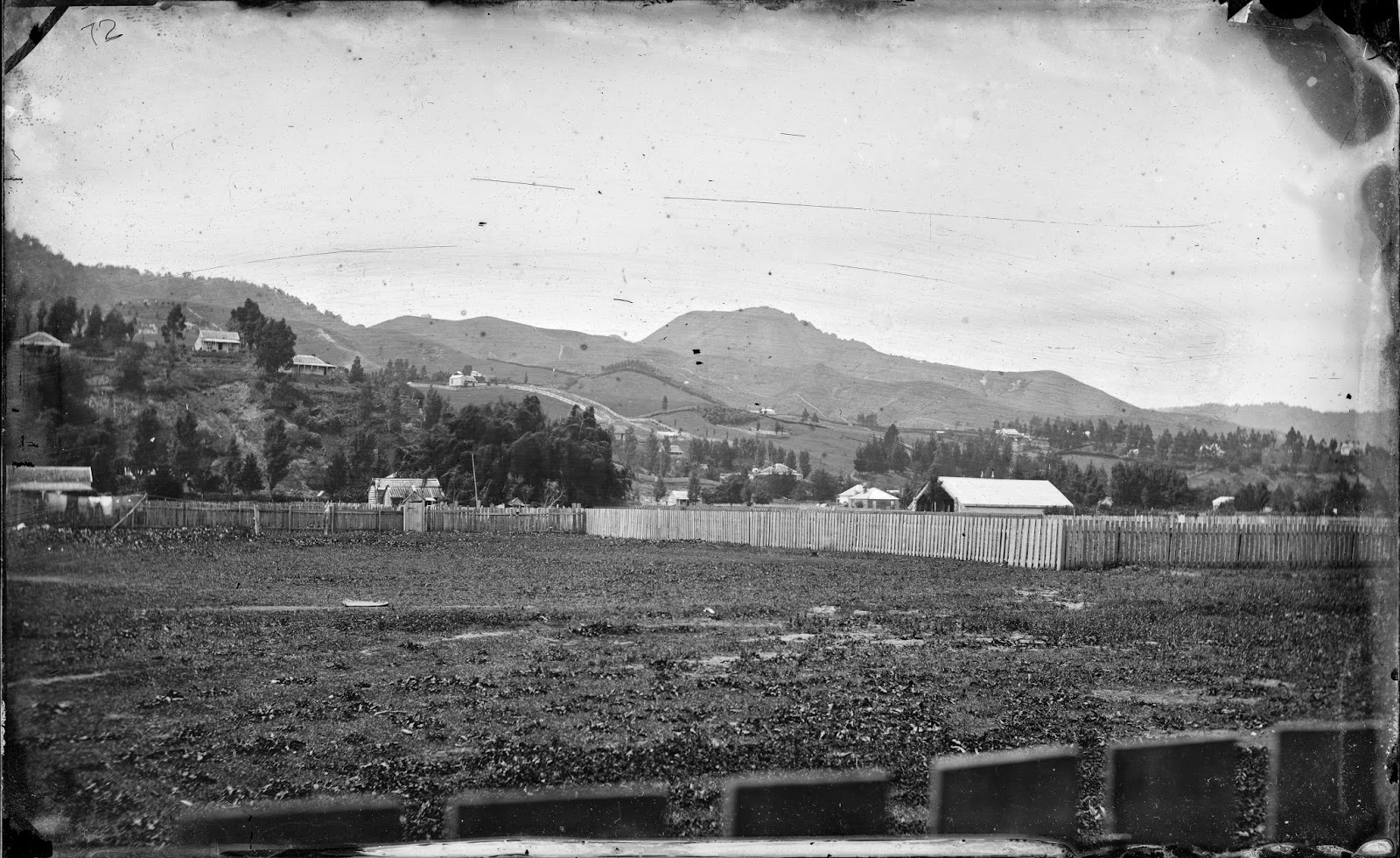 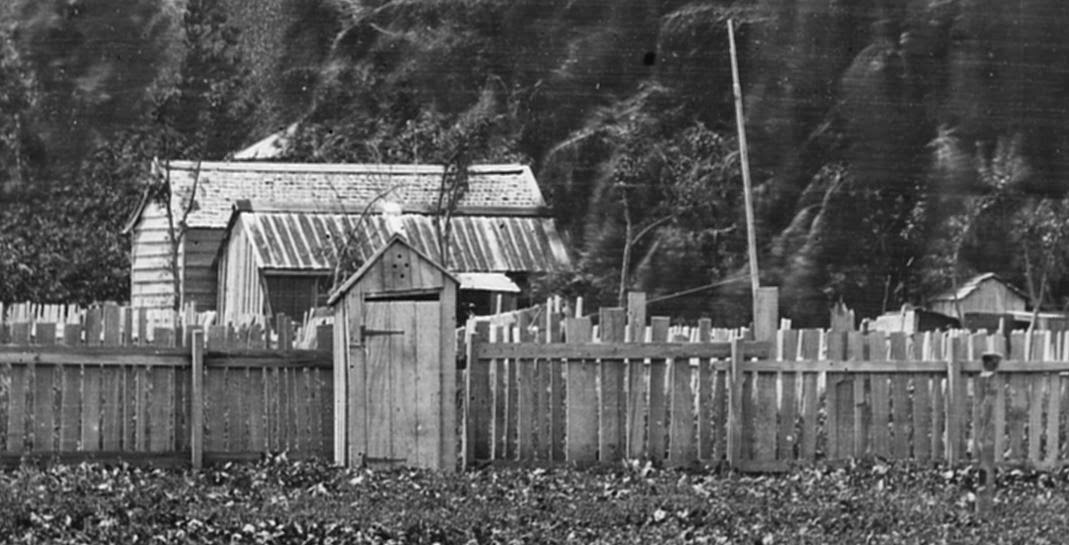 In the foreground of the photo is the area that today is housing and occupied by Thames South School. In this photo is this the large garden area associated with the old Kauaeranga Pa, a place where the reported Kumera and other crops would have been grown.
HOUSING: To the left of the photo is what looks like a shack, on closer look there is even an outhouse like structure, but given this looks like a garden then maybe it is just an implement shed?. Note that the fence completely surrounds this garden area.

Moving closer to the meeting house, the hills in the background of Parawai are a marked contrast to that of Shortland and Grahamstown - which would at this time be ravaged by the effects of mining. The land appears farmed and in set paddocks. No shortage of fencing here!  Also the houses are substantial compared to the miners huts in the northerly parts of the Thames. The rich folk lived at Parawai!!!

HOUSE of HOTUNUI: A closer look at the meeting house, located near the corner of Bowen (later Rolleston Street) and Fenton Street. Later in the 1920s this would be moved to the Auckland War Memorial Museum, where it resides today and it is the centrepiece of their Maori cultural display area. 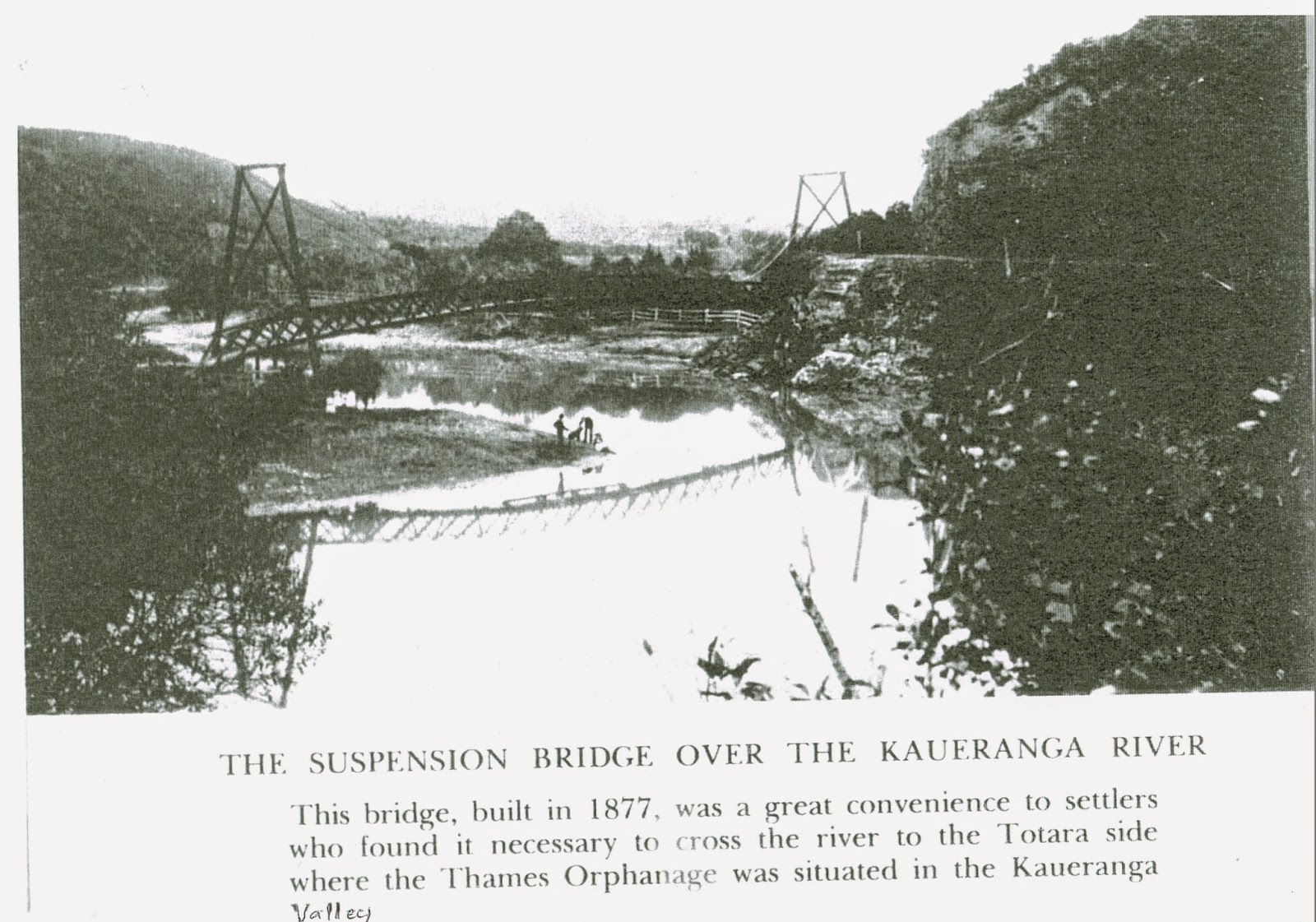 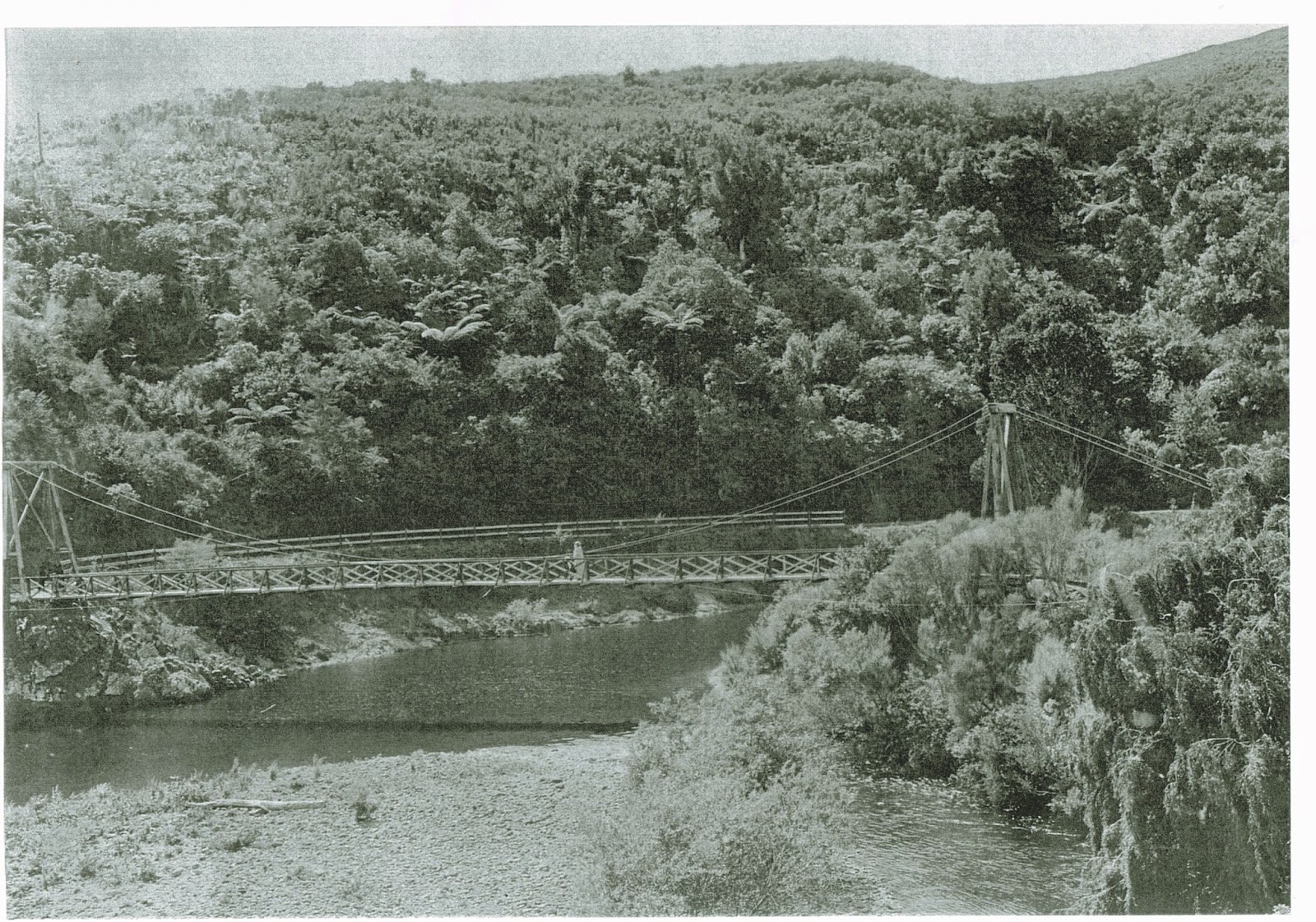 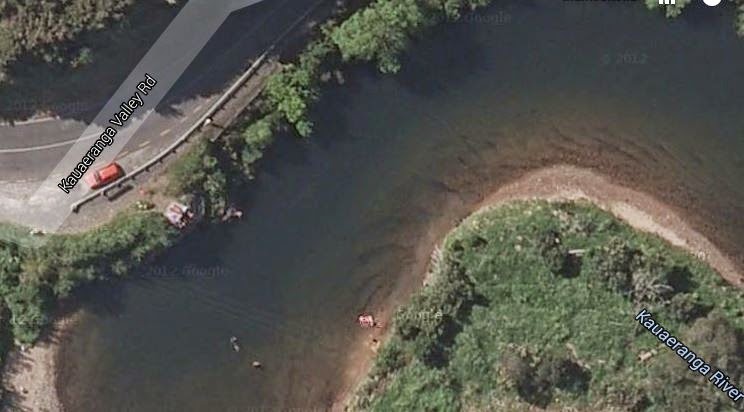 The bridge has been gone for many years, but for many the memory remains.

Email ThisBlogThis!Share to TwitterShare to FacebookShare to Pinterest
Labels: Thames Transport, Then & Now

The Shortland Hotel features often in posts, and no apology is forthcoming for that! The Shortland end of town is on the whole forgotten in photographic history of The Thames compared to the abundance of photos for the Grahamstown end of town. That end of town has a close range of hills that makes photography so much easier!!

There are many pluses to this photo of the Shortland end of Pollen Street. On this day a parade is taking place, children eagerly follow along with the procession. In the distance on the right is the shop of Coakley's (later on the corner of Pollen and Willoughby Streets). The Shortland Hotel in this view does not have the later second floor verandah.  Those hotel watchers will see its a great view of that angled front door we have looked at previously. 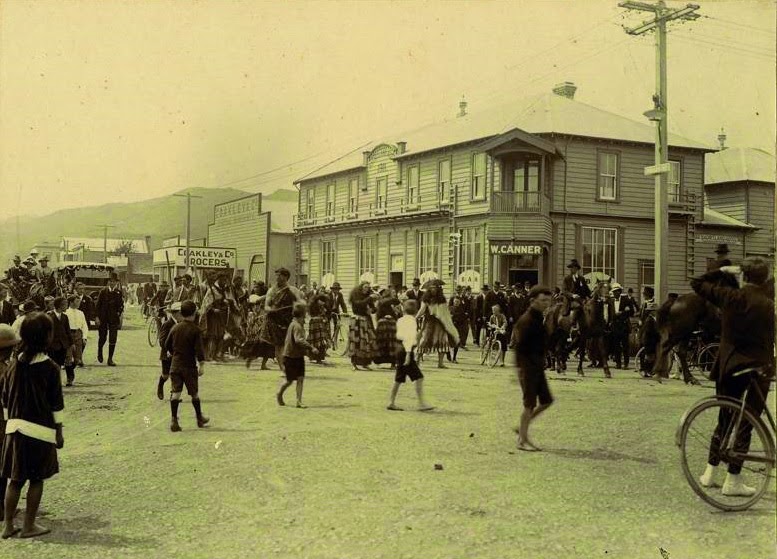 THEN AND NOW VIEWS 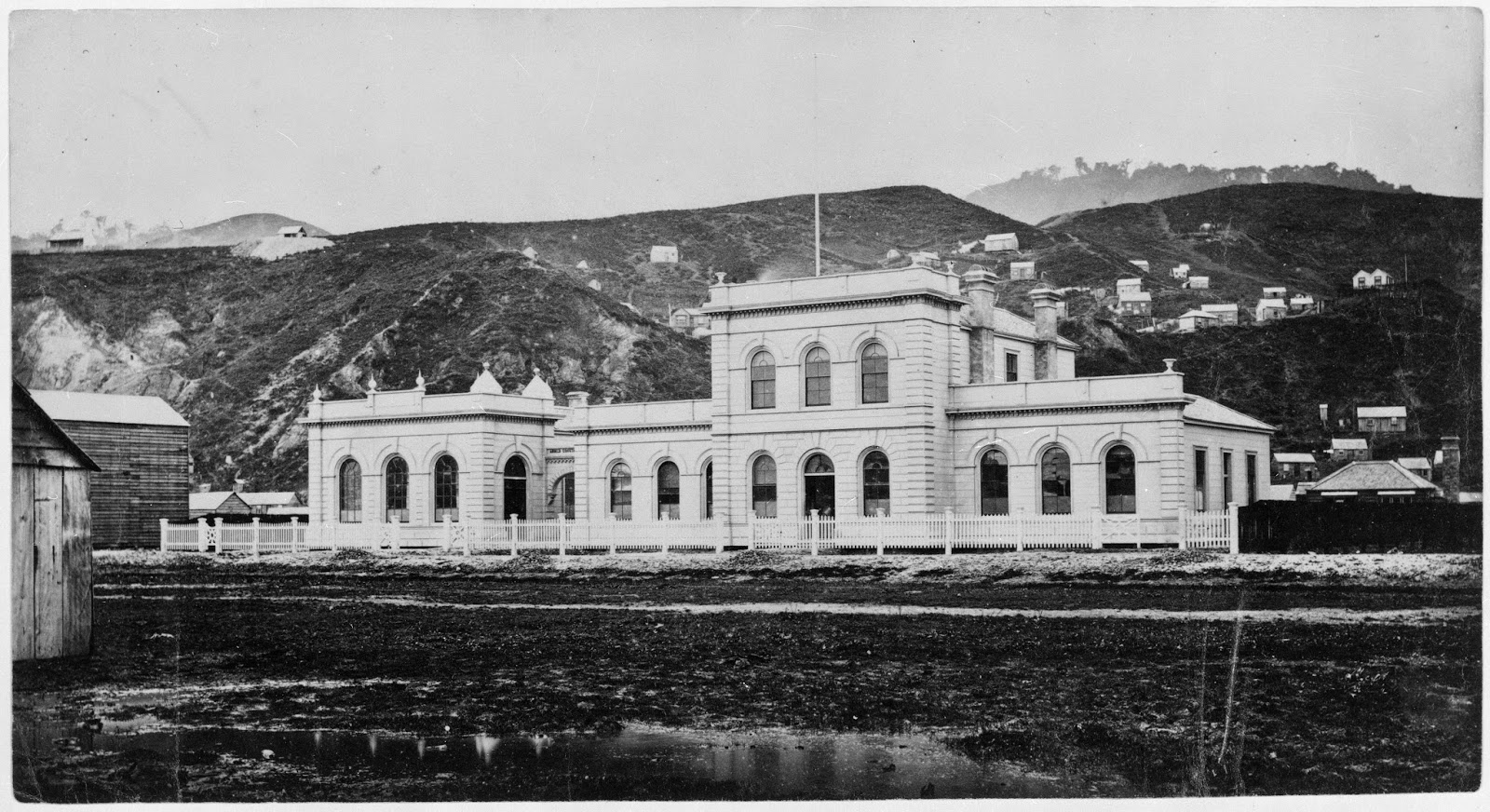 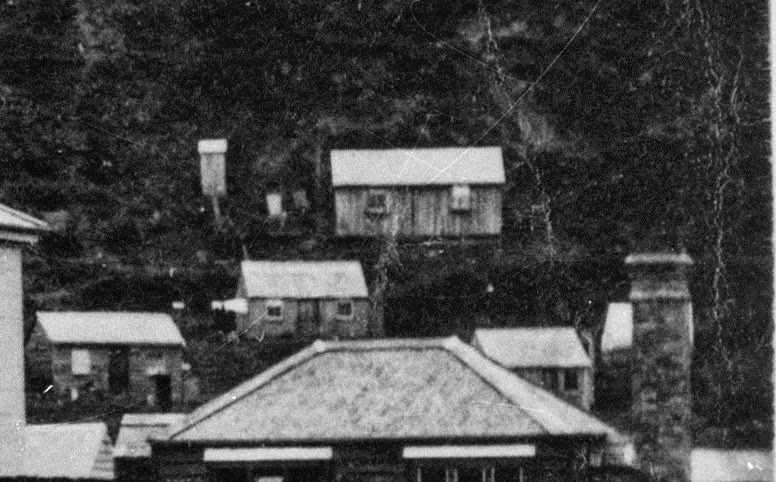 Over the decades there have been times when Thames Sporting teams and individuals have matched with the best. If you have one to share, please let me know. 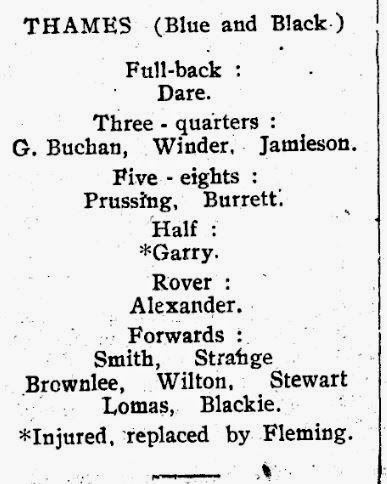 One such moment was when the Thames Rugby team won the Peace Cup off Hamilton in 1920. There were 1500 people at Steele Park in Hamilton to witness Thames (dressed in their blue and black colours) defeat Hamilton 11 points to 8.

There is a full match report in the Thames Star 20 September 1920. The report detailed how Winder,  who was playing for Thames injured his arm but went back on - luckily he did as he marked and kicked the winning goal!.

Moments like this were not quickly forgotten. In 1976, Cliff Barker of Thames remembered the great day and the wonderful years of football that followed. (Thames Star 29 June 1976)

“Mr Barker recalled some of his experiences as a team member at his recent ninetieth birthday celebrations. He joined the team for its second Peace Cup game, the game after Thames won the cup from Hamilton in the first successful challenge for it. Even though he didn’t play…Mr Barker remembers what happened…Hamilton was under hard pressure from Thames when suddenly a Hamilton forward managed to grab the ball and relieve the attack by kicking for the line.  No Thames player was there, except…J Winder was on the sideline having his injured leg rubbed by a medical attendant.  And then…"Winder thrust the medical chappie aside…and at the same moment got a nod from the referee as he rushed on to the field and joined the play.  He took up a bouncing ball and with masterly precision thumped a dropkick dead-centre between the posts.” Thames had won its first Peace Cup.


Cliff then joined the side aged 36. And they had more wins. His captain was “Circus Hayward, who was 38, known as the granddad of the team. They travelled to Auckland on the Wakatere, which was an adventure in itself. In one game Mickie Lomas scored three tries – the team formed a circle around Lomas and sang, “For He’s A Jolly Good Fellow.”
The reporter asked Cliff how the team practised? He replied, “Quite a few of us were fishermen, working three and four days away from Thames…To the best of my memory you went for a gallop around the streets when you could, but I can never remember having group training sessions…You were picked for the reps, and the rest was up to you.”

Cliff Barker's son Doug, had a cartoon published with the article and in later years others concerning the Peace Cup also appeared in the local paper. For many long years it was always the dream to bring the cup back to Thames. 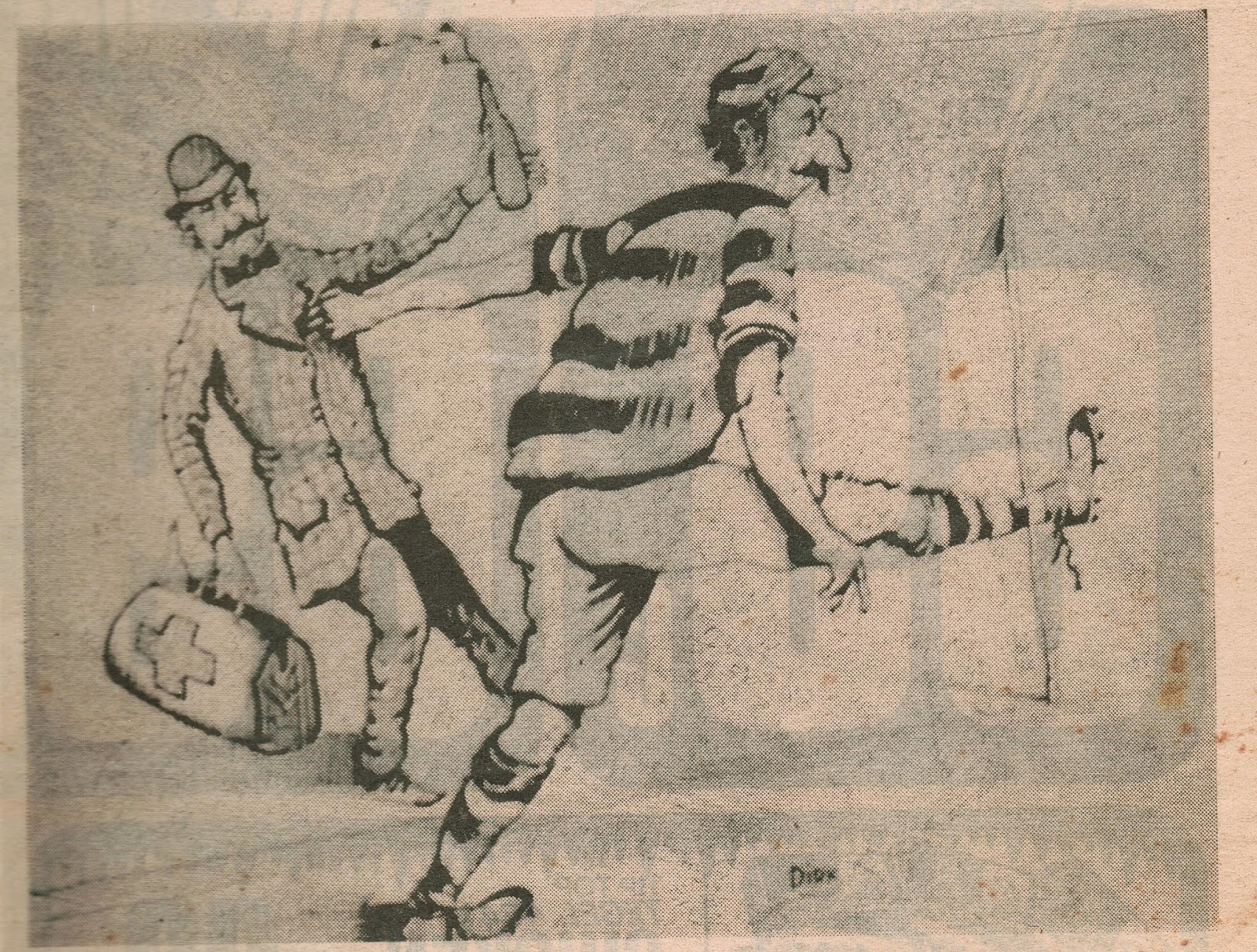 A cartoon depicting Winder making the winning kick to claim the Peace Cup in 1920
By D Barker, Thames 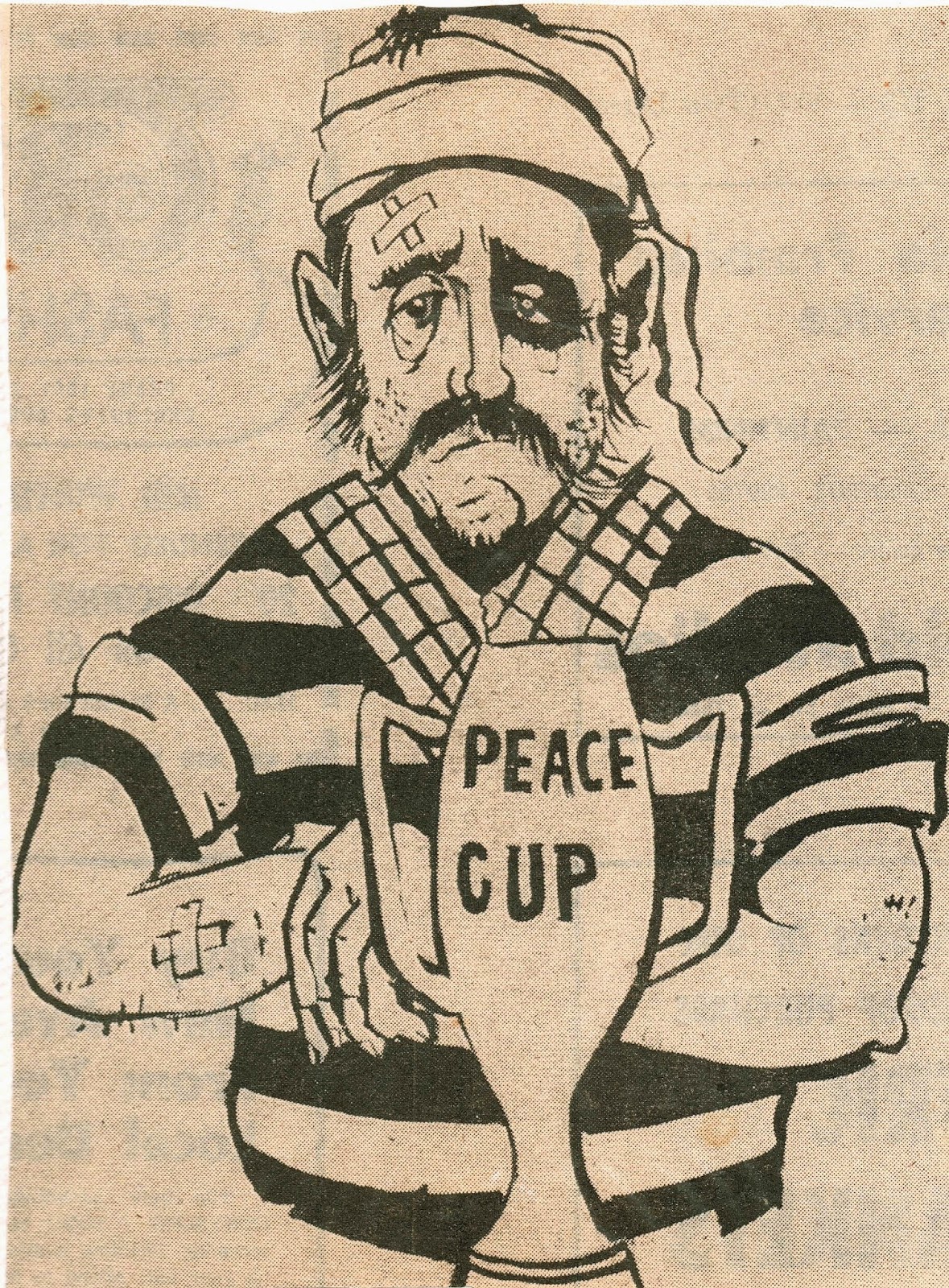 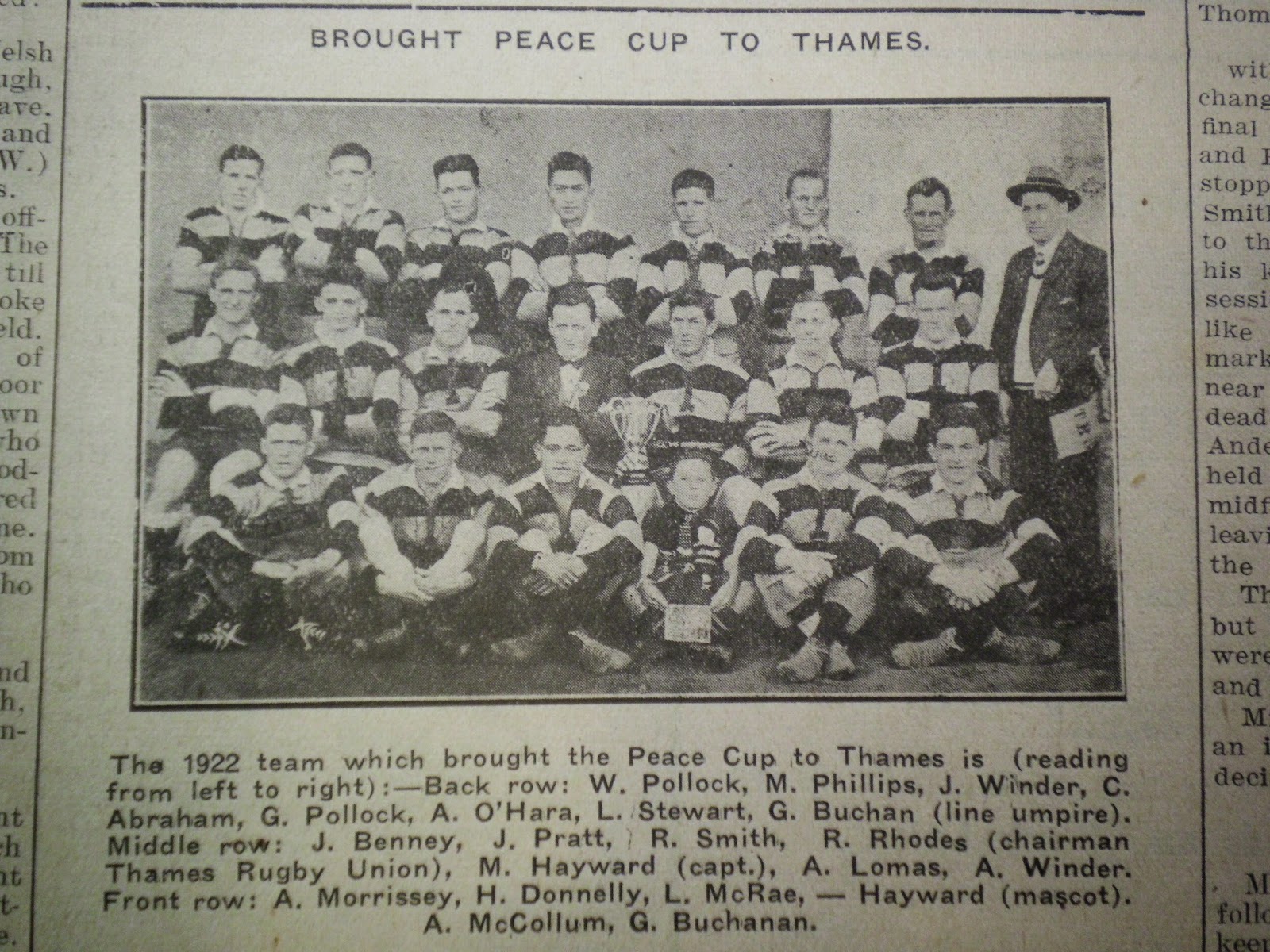 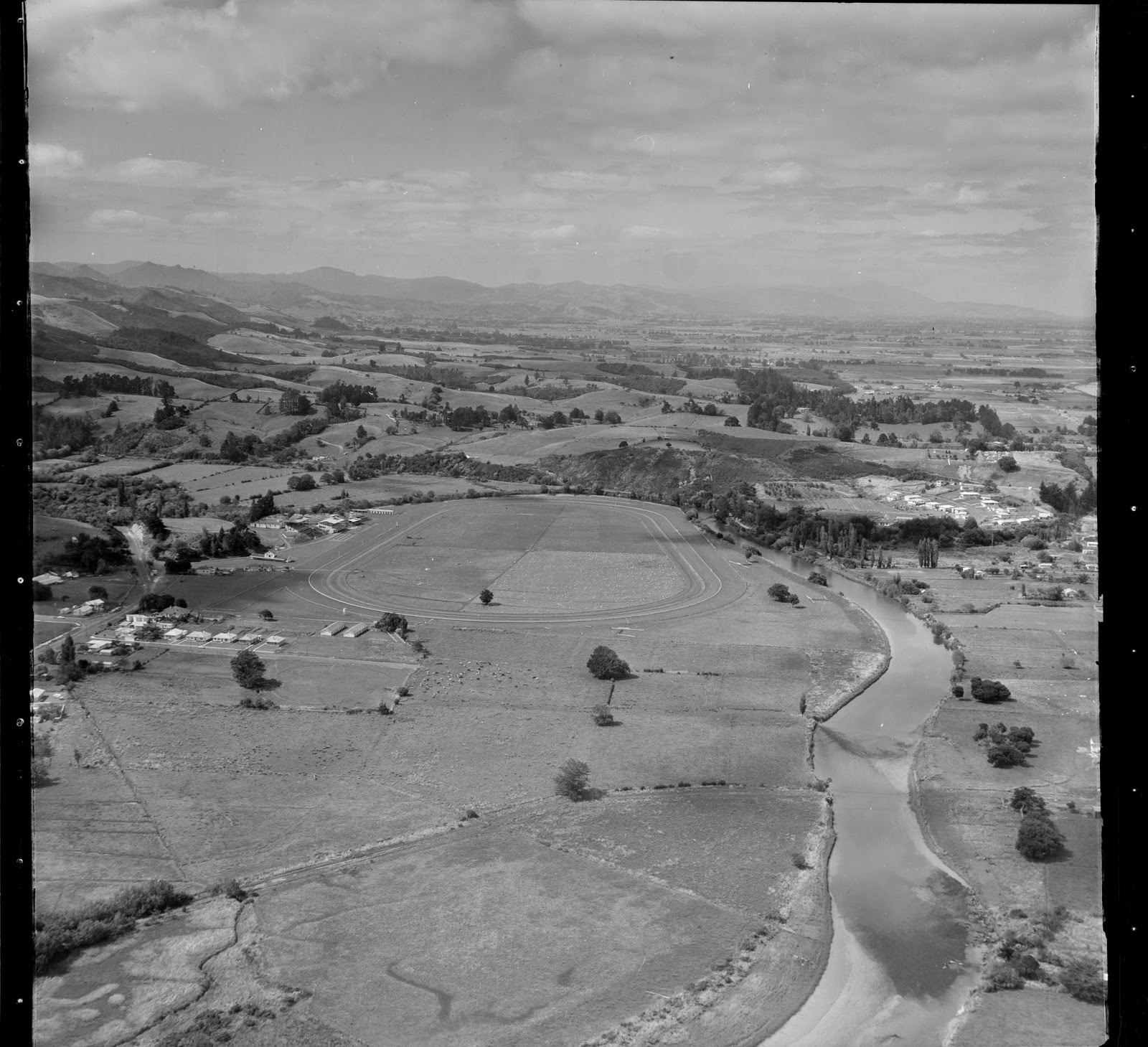 A few more photographs from the 1927 Thames Star Newspaper. 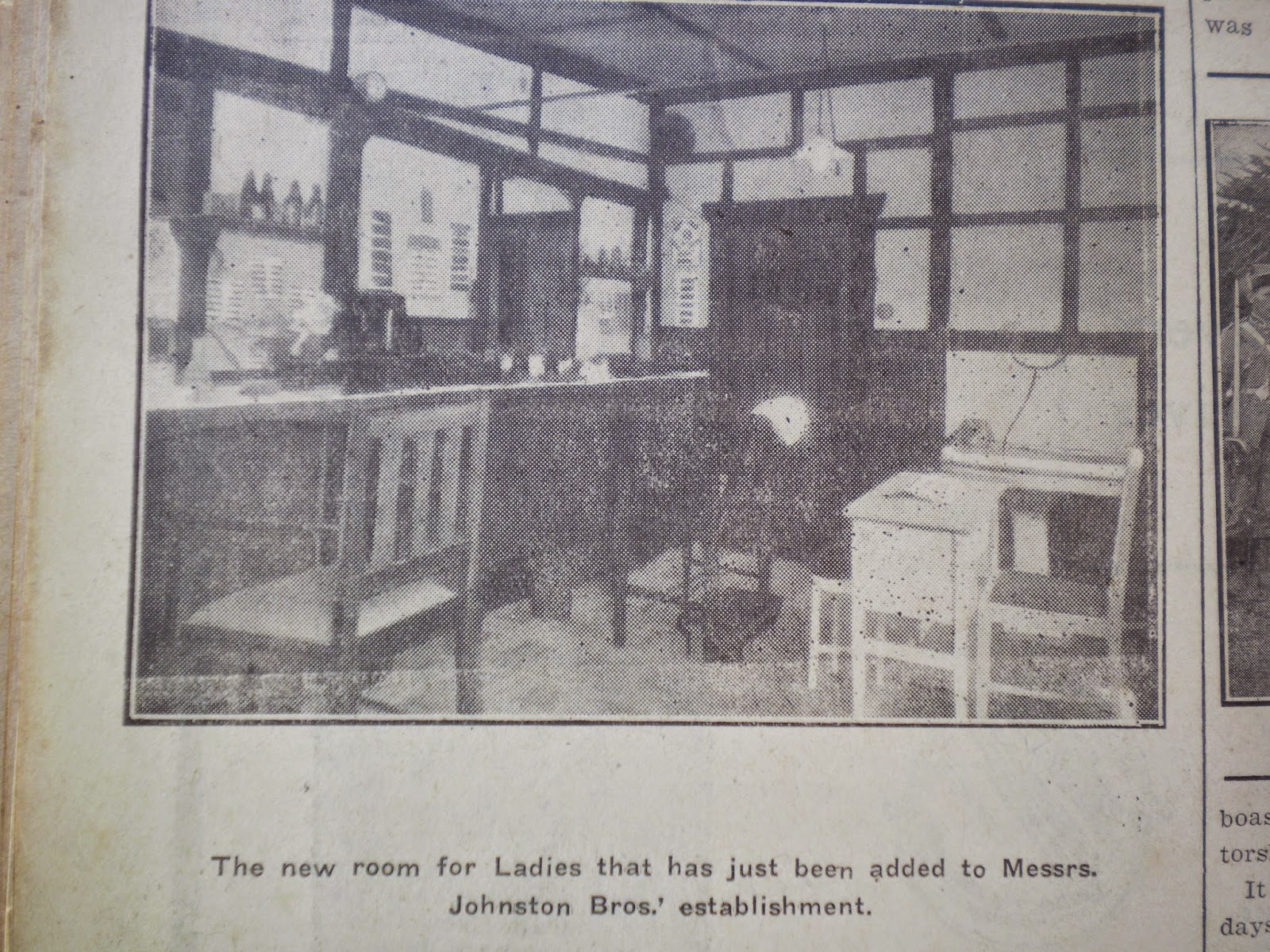 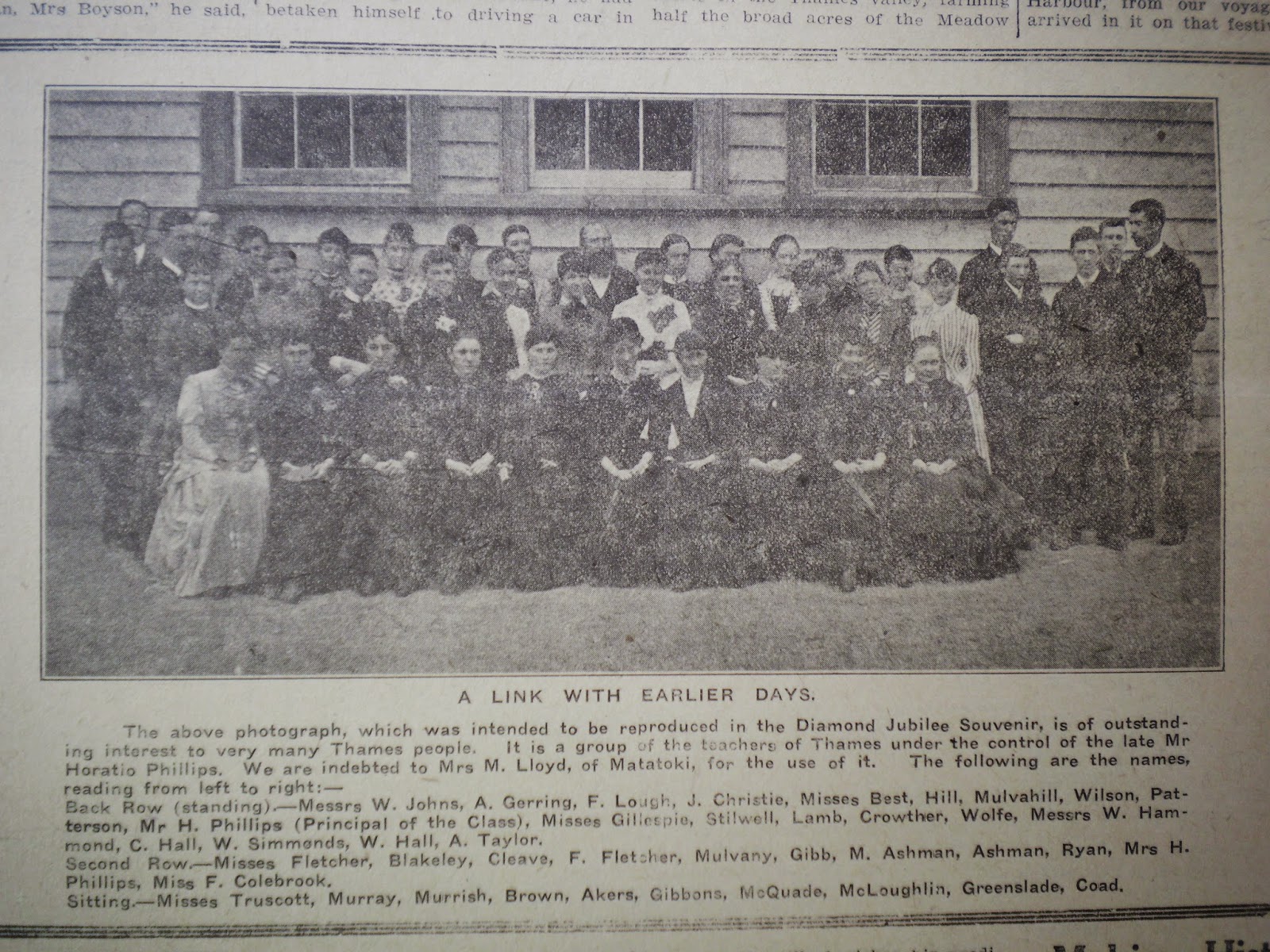 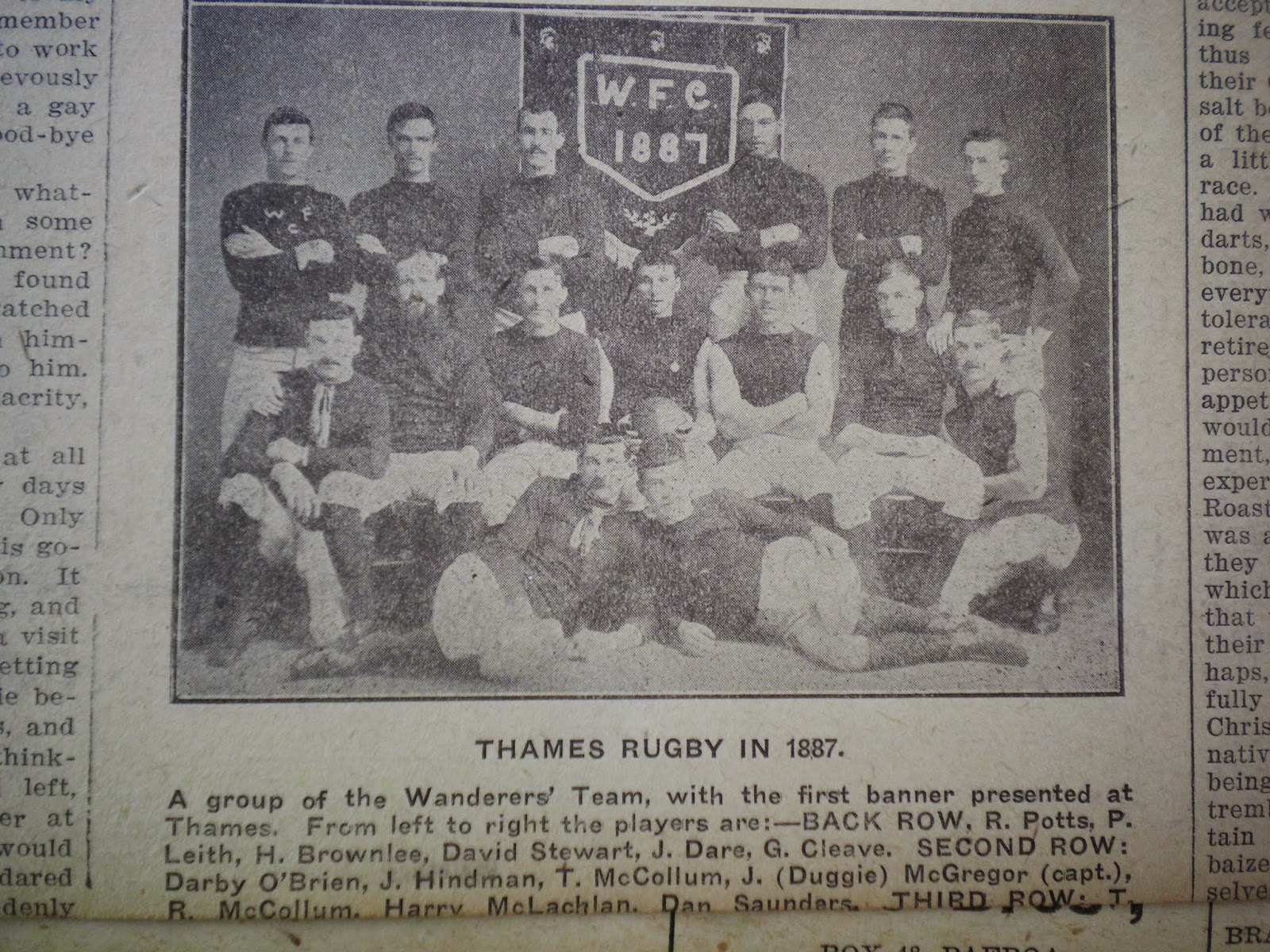 Thames (NZ): Miscellaneous photos from the 1927 Thames Star Part one

Maybe it was the cost that prevented the newspaper publishing more local photographs, but there was never ever any shortage of photographs of movie stars in most editions. Here are a selection of photographs in the 1927 Thames Star newspaper. 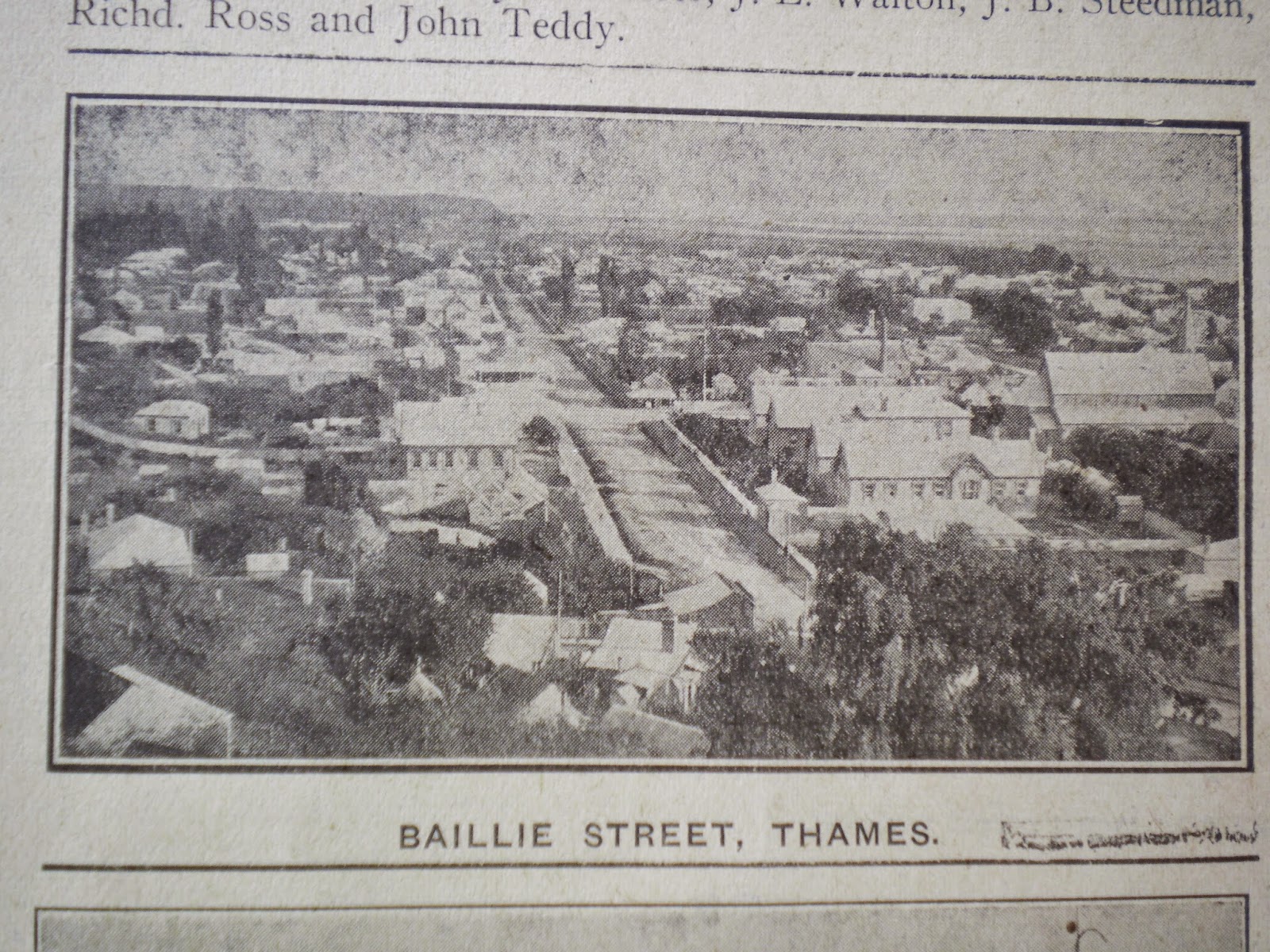 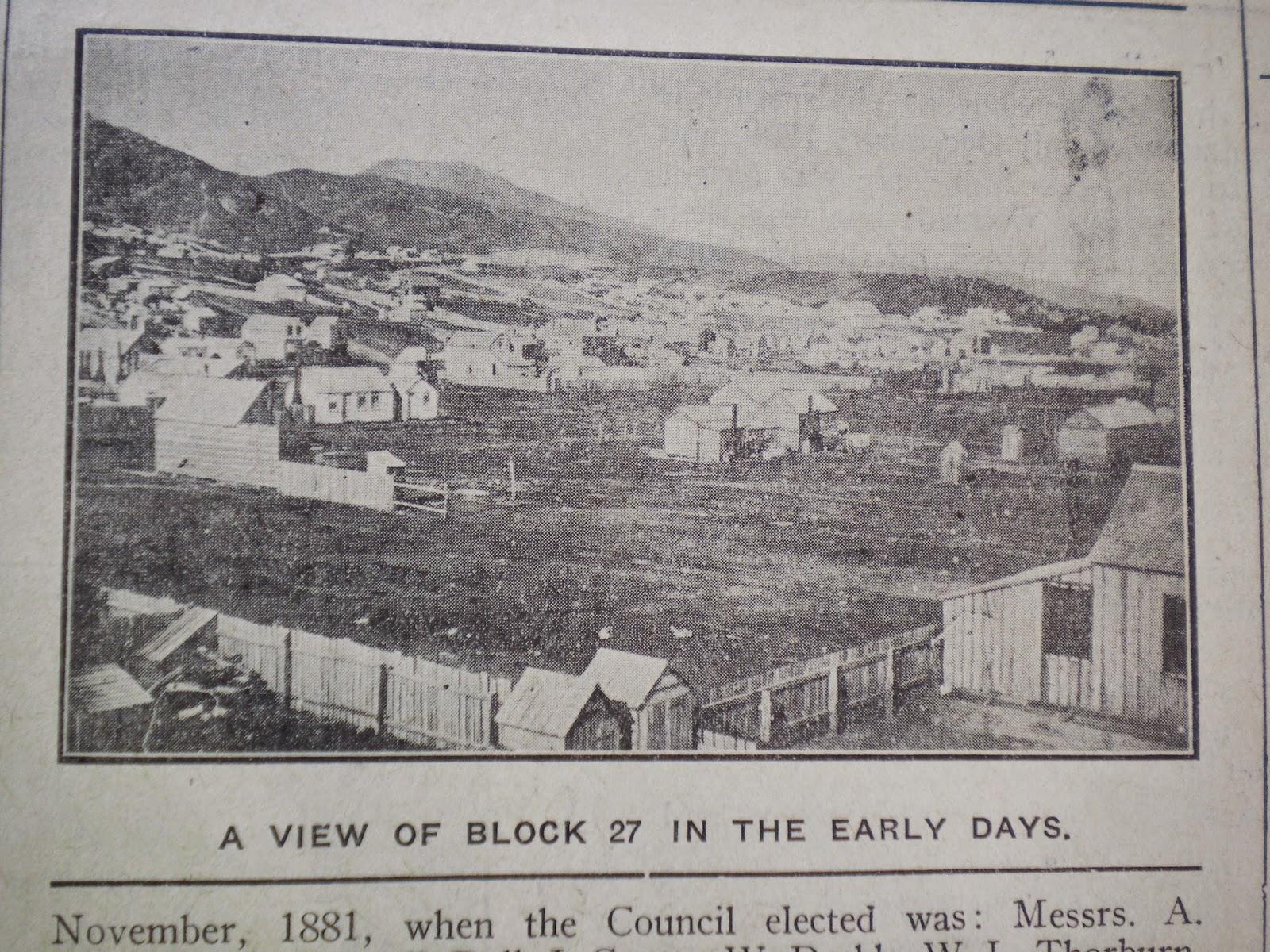 A VIEW OF BLOCK 27 IN THE EARLY DAYS 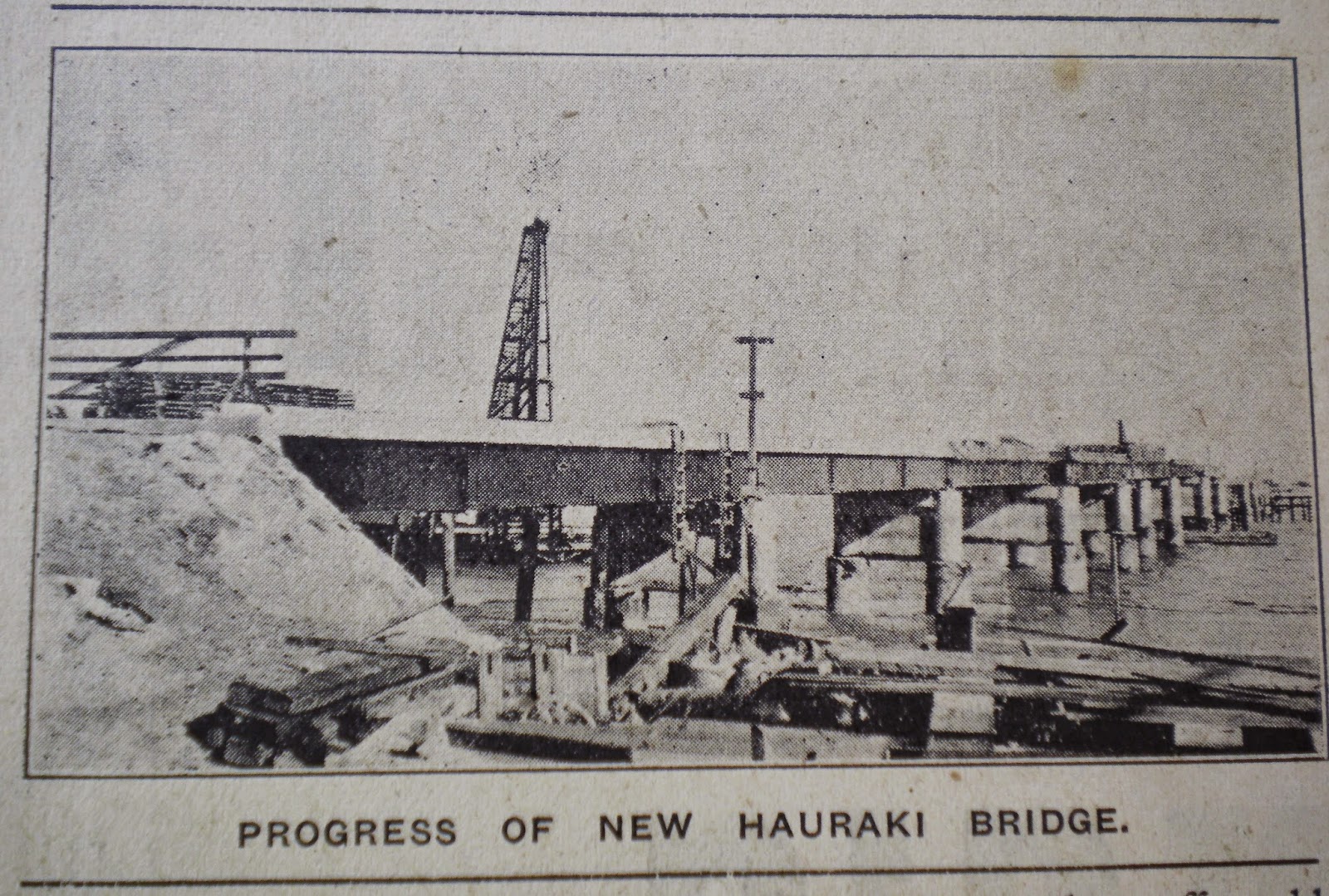 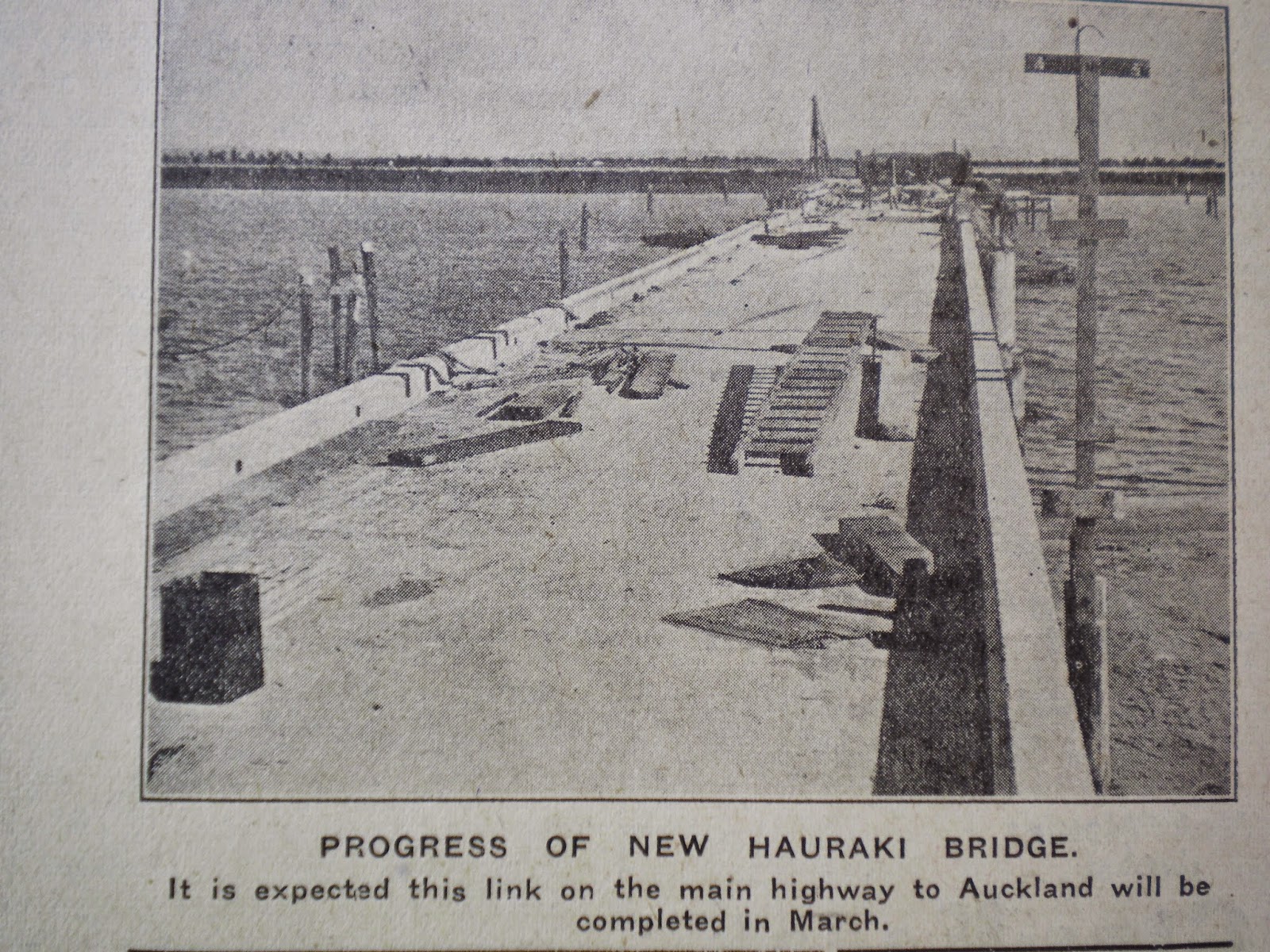 PROGRESS OF NEW HAURAKI BRIDGE
It is expected this link on the main highway to Auckland will be completed in March.
Posted by Althea at 10:47 AM