A photo in the 1907 Auckland Weekly News spread the word that a great discovery of Fuller's Earth had been made at The Thames. So what is Fuller's Earth?
"Fuller's earth is any clay material that has the capability to decolorize oil or other liquids without chemical treatment." (Wikipedia)


The story starts back in 1890, when miners discovered a strange substance up the Tararu. They were quartz miners so not interested in this find, but curious what it was - so they took some away for analysis. The results confirmed that is was Fuller’s earth, but they were still not interested in mining this mineral, so the mine was left untouched. (Thames Star 2 October 1906) 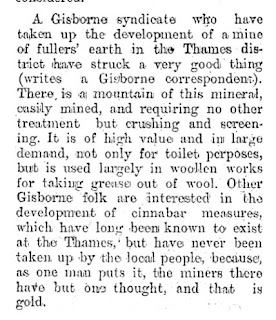 In the Thames Star 28 May 1906, there was an article about a Gisborne syndicate who were ready to mine a mountain of  mineral known as ‘Fuller’s Earth.’ It required crushing and screening before it could be sold for toilet purposes and used in woollen works. Ironically it was mentioned that Thames miners had known about this resource, but were only interested in mining for gold!

Mr James Patterson was manager for the syndicate, by June 1906 the necessary buildings and preparations had taken place to allow for the mining to begin.  (Thames Star 27 June 1906) By October it had been confirmed following analysis that the quality of the Fuller’s Earth at Tararu was equal to the imported material. (Thames Star 1 October 1907)

A strange twist of fate led to a group in Gisborne hearing the news that there was a deposit of this special mineral at the Thames. A full report on the operation appeared in the Thames Star 2 October 1906.


March 1907 Mr Paterson resigned as manager, while being praised for the excellent work he had done establishing the plant at Tararu. (Thames Star 6 March 1907)
There was a story in the Auckland Weekly News in 1907 on the mining operation:

“This discovery, which was made at Tararu Creek, about two miles from the sea, should prove of considerable value when the claim is properly opened up. The earth is said to be of the finest quality, needing little work to make it ready for the market. Besides the great demand for it as a toilet requisite, Fuller’s earth is used largely by the woollen factories, one of which alone uses from 40 to 50 tons per year for cleaning the rough woven fabrics.  So far the deposit has been opened by to 65ft in width, but from a rough survey of the locality it appears that it covers a very large extent of ground.  Mr A Vowles, who re-discovered the deposit, which was previously known to exist, is standing at the door of the shed.”

March 1907 a notice appeared in the paper requesting all accounts be sent to Mr F J Teat, Chairman of the Fullers Earth syndicate.  The Thames Star 19 June 1909 reported on an auction of plant and equipment  on New Chum Mineral lease, No 791 Tararu Creek. Included in the auction list were 120 bags of Fullers Earth. Whether the mine sold at auction is not yet known.

In 1914 Mr J A Shand applied for a mining license for British Fuller’s Earth. (Thames Star 23 November 1914)  Then in 1915, the paper reported further interest in the Fuller’s Earth mine at Tararu. (Thames Star 12 January 1915) Again it is not yet known the outcome of this renewed interest in the mine.
Interestingly in 1931 a report in the Auckland Star 22 September alerted readers to the wealth of minerals that exist in the Dominion. The classic example being what can be found at Tararu. “In a radius of three hundred yards in a locality adjacent to Tararu the writer has seen and assisted to mine the following minerals: Gold, silver, copper pyrites, galena, zinc blend, iron pyrites, hematite in large quantities, molybdenum and fuller’s earth.”

How successful or how long the mining operation continued has yet to be researched, contributions to complete the story would be welcomed. It is an interesting story if nothing else how men desperate for riches turned down the opportunity to mine the mineral in the 1890s, for fear they would miss their chance at finding GOLD!
Posted by Althea at 8:57 PM

The local body elections 2016 have provisional results for the Mayor, with Sandra Goudie (5584 votes) and Peter French (5103). 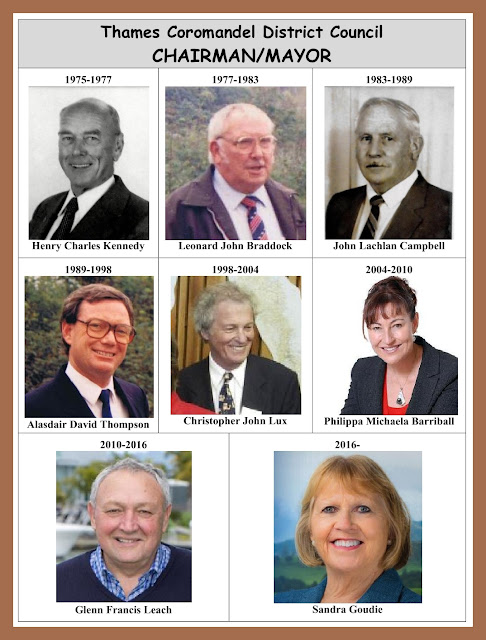 Special thanks to TCDC staff for your assistance
Posted by Althea at 4:06 PM