While searching for information on JAMES ARTHUR SHAND, I found three early photos at Papers past of early Thames (published 1917). The quality is poor, but description makes them worthy of a view.

1. THE EARLY DAYS OF THAMES. View of Shortland from Karaka Creek, taken in 1871. In the right foreground is where the Thames Hospital and Thames High School buildings now stand. , The large building in centre is old St. George's Church in Rolleston Street. Note the barren appearance of the business centre of to-day. (Block kindly lent by J. A. Shand.)

2. THE EARLY DAYS OF THAMES. " View of Grahamstown portion of Town, taken in 1871. In the right foreground the tents mark the spot where Messrs. A. and G. Price's foundry stands to-day. Curtis' wharf in centre (Block kindly lent by J. A. Shand.)

3. THE EARLY DAYS AT THAMES. View showing lower portion of Moanataiari Valley, Eureka Hill on left foreground. On the other side of the spur, on left, was where the famous Shotover Claim was located. ' (Block kindly lent by J. A. Shand.) '

So who was J A SHAND? James Arthur Shand was a war correspondent in the Boer War, who settled in Thames and was editor of the THAMES STAR newspaper. The clipping below tells of how Mr Shand was responsible for getting the nurses to the front. He later served in WWI and reports of his efforts as a Boer war correspondent are detailed in this doctoral report by Oostermann.

Shand was later asked by the New Zealand Government to write a history of the war. The details are: J. A. Shand, ‘O'er Veldt and Kopje, The Official Account of the Operations of the New Zealand Contingents in the Boer War (Years 1899–1902)’, manuscript, n.d. [1931], Alexander Turnbull Library, Wellington, MS-1790-1793.

One of the many schools that existed in Thames pre 1900 was WAIOKAKARA SCHOOL, situated on the corner of Cochrane and Pollen Street, at the Grahamstown end of town.

The 1902 CYCLOPEDIA of New Zealand (Auckland Vol 2) has the following information on the school:
The Waiokaraka Public School contains five class rooms, with accommodation for 500 children. There are 430 on the roll, and the average attendance exceeds 400. There is a teaching staff of nine members.

From the middle of the ,1900s the school became known as CENTRAL SCHOOL and continued until 1971, when it closed as schooling in Thames underwent changes - with new schools having opened at Parawai and Moanataiari. 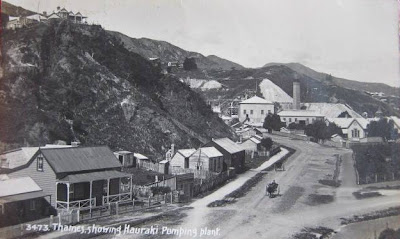 Those of us who live in the Thames area, easily forget how confusing it can be understanding the location of the cemeteries of Thames and how this relates historically to the way/where our ancestors were living.

A site that is invaluable in helping with this, is Murray's KiwiCelts NZ Cemeteries database for all New Zealand. ENTER "THAMES" in the search box, then you can click on which ever area you are interested in - to zoom closer and look at the cemetery and also see what information is available. Like google-earth, you can  look closely at the selected cemetery.

As previously mentioned there is a summary at this page of my Thames site.

A great new CD from Colonial CD Books, "Deceased Estates Listed under the New Zealand Public Trust 1880-1928/1931-1950." A quick look shows many Thames names.  There are over 2000 images taken from the NZ Gazette and the contents are fully searchable.

Below is an example that shows you the type of information that is available. 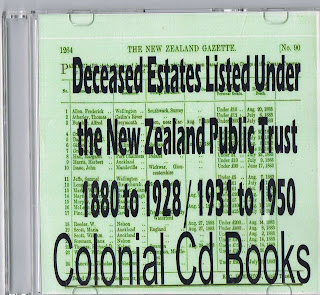 The Thames entry on this page is for JOHN JOHNS, entry No 9, British residence: St Just Penzance, Date of order: Sept 27 1888, value of estate: under 860 Pounds, Deceased date Sept 1 1888﻿.
John JOHNS was buried at Shortland Cemetery, Thames 3 September 1888; native of Cornwall. There is no headstone, the plot number is 1135, he was aged 59 years.
In the 1881 Thames electoral roll there are two JOHN JOHNS, both miners; one living in Pollen Street and the other  at Waiotahi Hill. The reference to St Just is common for many Thamesites in their genealogy. The cornish miners were a nationality that settled in Thames in large numbers during the gold rush. My Pascoe/Williams ancestors were from St Just in Penwith and they were just a few of the names that immigrated to New Zealand from this particular village.
Definetly a resource to add to your lookup list, for ancestors all over New Zealand.
Posted by Althea at 3:45 PM

There are no shortages of photos for this grand old Church, from the coloured one below, to the older ones, that are characterised by the fence surrounding the imposing wooden building. Situated on the corner of Pollen and Pahau Street, Thames; with the church on the south side and the old Junction Hotel on the north side. In the early days of the goldfield, pre:Borough amalgamation this intersect marked the boundary between Grahamstown to the North and Shortland to the South. 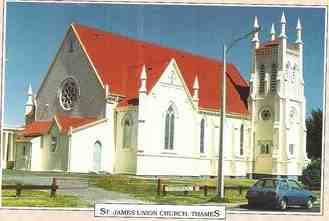 From the time the goldfields opened (1st August 1867) church meetings and gatherings were held for many denominations, including the Presbyterian Church. From Auckland people of the church came and provided services fortnightly in a variety of places, from home to public halls. The first Church built in 1868 on the corner of Rolleston and Richmond Street, followed by a second church in 1871 on the present site. (Corner of Pollen and Pahau Streets) 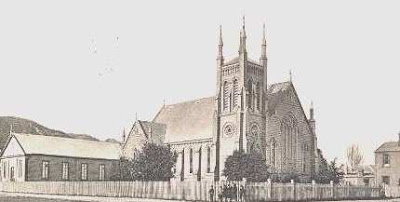 In 1896 it was decided to build a new church and the old one was shifted to the back of the section, where it remains to day as the ST JAMES HALL. The magnificent Church was designed by Mr W H Skinner and built by Mr W M Hay, with the foundation stone being laid 5th February 1898. The Church was opened for services Sunday July 24th 1898.  The church today is now The Thames Union Church following the amalgamation of the Presbyterian and Methodist Churches in 1973. 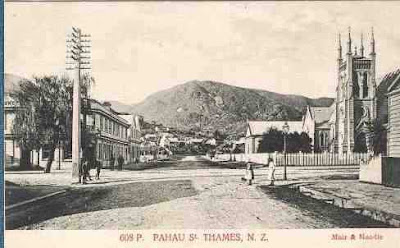 St James Presbyterian Church, Thames New Zealand
There are two booklets covering the history of the church in Thames:
"St James Church Thames, Centennial 1898-1998" and "Thames Union Parish, Some snippets of Early History"; as well as histories in Thames anniversary books.﻿
St James Church seat Letting book details for 1872-1894 are available online
Details of Church records can be obtained from the church archives or from the Church office in Thames. The Treasury, Thames is currently involved in a project to photocopy the church records and index them available for researchers.
Posted by Althea at 4:03 PM

A thriving place of business in years past was the Shortland Wharf and the Thames fishing industry. Many factors including fishing quotas have led to changes at Thames. Today a fishing shop still exists, but gone are the days of rows of boats lined up against the wharf.

The article below was written in 1952 and details the industry had existed for over 60 years. At that time there were 14 vessels using the wharf as a base. Who can forget the busy scene of the boats coming in and out to meet the tides. The boats tied up and the baskets of fish being unloaded across the boats and processed in nearby sheds. 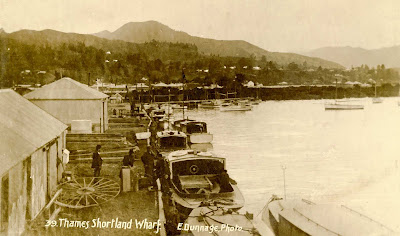 During the Rugby World Cup there is a trail that will honour the soldiers who served in the South Africa War; in particular WALTER CALLAWAY of Coromandel.

A brochure fully details the trail and the history involved:
"As a young man, Walter worked industriously on the Coromandel as a logger and gold miner. He never lost his Maori identity, which he inherited from his mother, and immersed himself fully into the vibrant sporting and social life of the Coromandel.  The Walter Callaway Trail focuses not only on his life on the Coromandel but tells of his unique experiences while serving for New Zealand in the South African War of 1899-1902. By following Walter’s story you will grasp the complexities and hardships the New Zealanders faced while serving their fledgling nation and the British Empire in South Africa."

The Treasury website has a growing amount of information on the soldiers who served in the war, usually referred to in New Zealand as the Boer War.

If anyone reading this has a photo of any of the men listed, I would love to receive a copy. In conjunction with the website, I am collating hard copies of the information that will be available at The Treasury - along with a copy of the soldier's war file.