Australian Sir Charles Kingsford Smith was an aviator who set numerous flying records in Australia and other parts of the world.


In January 1933, the people of Thames eagerly awaited the chance to see Sir Charles Kingsford Smith’s world-famous monoplace called the ‘Southern Cross’. In the latter part of the 1920s previous efforts had been made to have Thames included in a visit, but this does not seem to have taken place.
Mayor of Thames, Mr S Ensor tried vigorously to get Thames included in a touchdown visit during the January 1933 New Zealand visit. Alas this could not be arranged, so Mayor Ensor sent a special telegram to Sir Charles at Rotorua.
“Citizens regret Thames cannot be included in your itinerary, and would appreciate your circling above Thames during flight from Waihi to Auckland. A favourable reply would afford great pleasure.” (Thames Star 19 Jan 1933).
To everyone's delight a reply was received: “Pleased to fly over Thames approximately 3 o’clock Friday, 27th instant. – Kingsford Smith.”


The town went into a frenzy of preparation led by Mayor Ensor. The Thames High School grounds were chosen as the suitable venue for the town gathering to watch the ‘Southern Cross’ circle Thames. The word “WELCOME” to be painted in white 20 foot letters across the ground at the school. Thamesites were urged to attend with flags and other emblems of greeting. Also that buntings and flags be flown on businesses around the town where possible.
The big day arrived and an altered schedule meant that the plane did not arrive until just before 5pm 27 January 1933. People had gathered at the Thames High School and other vantage points around the town.
“Sir Charles Kingsford Smith had notified his approximate time of arrival over Thames as 5.15pm; but shortly before five o’clock the machine was sighted coming from the south-east from the direction of Paeroa, and the news quickly spread.  As the big ‘plane, flying low, swept closer into view the majority of residents were afforded their first glimpse of the world-famous “old bus,” as Sir Charles affectionately terms her, 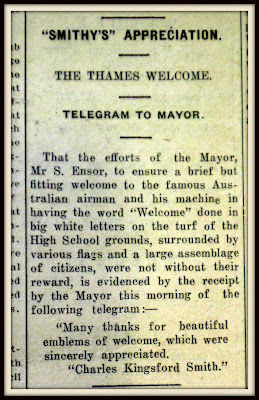 Dipping low over the High School ground and rising sharply to circle over the town, the Southern Cross revealed her graceful lines to the many watchers below, the passengers being distinctly seen waving through the windows of the ‘plane, and the registered lettering, VH-USU, showing up boldly. Amid the cheers from the younger brigade and much hand-waving, Sir Charles manoeuvred his big machine as easily as the smallest Moth, and the impression gained was one of great latent power in the three engines which roared out their response to the welcome from the people of Thames.


A handkerchief fluttered from the side of the Southern Cross, and with a final dip of the wing Sir Charles soared higher and was away once again across the Gulf in the direction of Auckland.” (Thames Star 28 Jan 1933)
A telegram was sent from Sir Charles to Mayor Ensor the following day: “Many thanks for beautiful emblems of welcome, which were sincerely appreciated.”


Maybe amongst your family memorabilia photos you may have a picture of the day Thamesites saw the great Southern Cross fly over Thames? 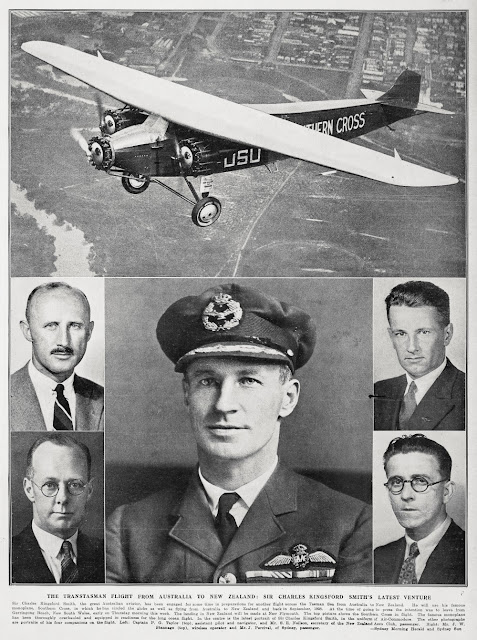