Background:
Thames’ World War One Memorial Forest was officially opened and planted 11 August 2015.
“The New Zealand World War I Memorial Forests, which are based in up to 10 sites in the Coromandel, will eventually mature into forests which will enhance environmental values and serve as calm places for people to walk and remember New Zealand history. Each forest will commemorate a different battle or campaign of the war, with at least one site in each Community Board area.” (http://www.tcdc.govt.nz)

The Reality:
Money ran out and the TCDC was unable to complete all of the forests, the 'canned' forests included the Messines Forest that was to be planted on the Waiotahi spur, Thames.

Thankfully the forest that commemorates the known Thames ROH in WWI, was planted and continues to flourish! There have been lost trees, but plans implemented to do replanting and further work is planned for the following year.

TODAY, 16 December 2018:
The pohutakawa are a picture, and look even more spectacular as one drives along the Ngati Maru Highway to the Kauaeranga Bridge. 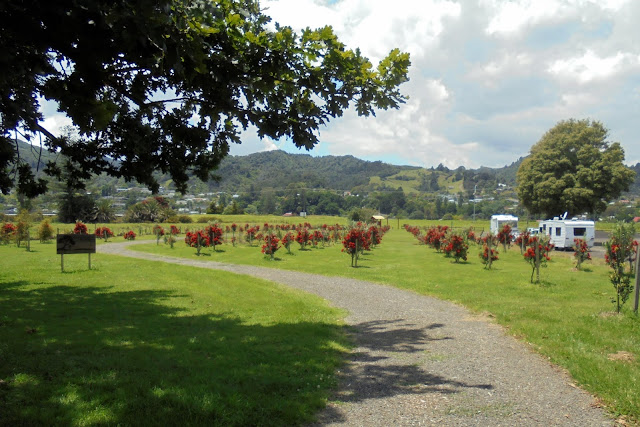 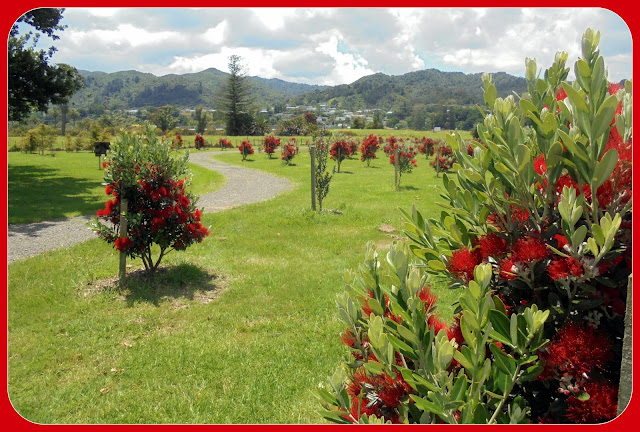 There were doubters who wondered how the trees would survive and yes some have been lost to flooding (resulting in the moving of some/replanting). To show how the trees have grown, see the example for the tree planted to commemorate John Polton Hicks GLESSING who was Killed in Action 4 June 1917. If you have a chance, stop and walk amongst the trees, and if you need help identifying a tree/soldier sing out or contact TCDC. 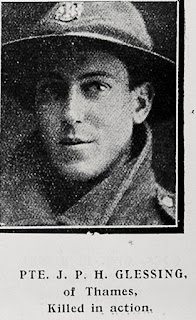 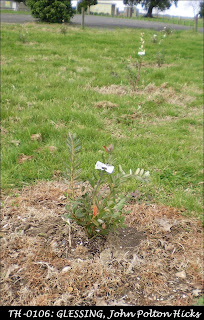 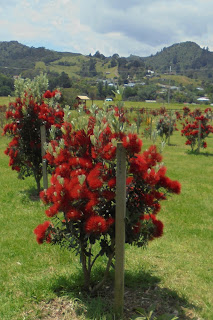 LEST WE FORGET
Posted by Althea at 2:43 PM

Thames (NZ): "With Them Through Hell" WWI Book & Thames Connections 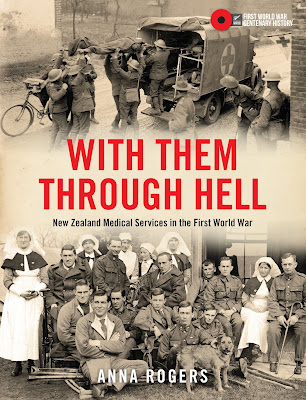 The publishers have been busy over the WW100 commemorations, and recently there was a new release that has reference to several Thamesites and others from around the district.

The book is "With Them Through Hell, New Zealand Medical Services in the First World War."
Written by Anna Rogers, it covers the medical services involved in the Great War. While repetitive of some other publications, the book aims to pull all the groups together rather than focus on the usual nurses or doctors. A beautifully presented hardcover book, 495 pages and published by Massey University Press. (copy available at Thames Library)

Our Thames trained nurse Cora Beattie Anderson is mentioned and used to highlight the stresses placed on those who cared for others.  When "Cora Beattie Anderson, mentioned in despatches and holder of the Royal Red Cross, was boarded on 10 May 1919, the diagnosis was debility caused by the 'stress and strain' of active service." page 406

Life onboard the hospital ships is discussed and mention is made of Sister Clara Hawkins from Thames who was aboard the Maheno.

Well worth a read, and I look forward to the chapters on dentistry, horses, and the many health support roles that were undertaken during World War One.
Posted by Althea at 6:35 PM

The Thames Public Art Trust ran a competition some months back for sculptures that could be positioned along the Hauraki Rail Trail - along a 7 km section from Kopu to Thames.

They will offer interest for the walker, cyclist and passing tourist. The magnificent statue for the Thames 150th Commemorations already stands south of the Kauaeranga Bridge. 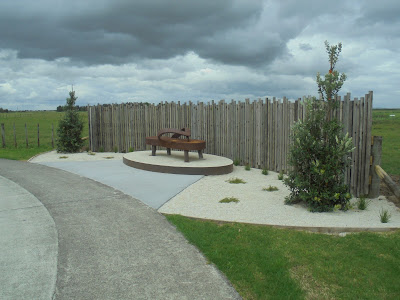 The winning design for the competition mentioned above was a 'jandal'. Described as being "2.4m by 1m sculpture by Hastings artist Ricks Terstappen won the utilitarian category of the trust's sculpture design competition." Source: Stuff 24 August 2018.

The headlines labelled the new sculpture as the Giant Jandal, I was therefore somewhat surprised to see its size when I finally reached it - walk from the airfield south and it is opposite the garden centre. The jandal is somewhat dwarfed  by the large fence behind, but an interesting addition to Thames' art works. Would have made a great 'seat' at Porritt Park where I am sure children would have delighted in climbing and jumping from the structure. 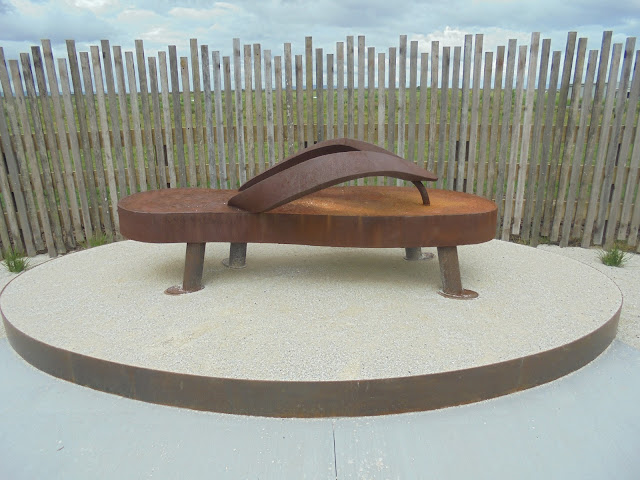 In the latest Heritage Magazine (Issue 151 Summer 2018 ), is an article by Kennedy Warne entitled "The Taniwha's backscratcher".

The Taniwha in the article is Ureia - the Hauraki's Taniwha. Stories about Ureia abound, including the story that the taniwha escorted the Tainui waka when it arrived and anchored at Te Anaputu, a rocky outcrop north of Tararu, Thames Coast.

On the right is "This carving of the taniwha Ureia is in the Hotonui meeting house, formerly at Thames but now in the Auckland War Memorial Museum. Ureia was a powerful taniwha living at Tīkapa (Firth of Thames). The taniwha is in the marakihau style – with a serpent-like body and hollow tongue."

The 'new' Kopu Bridge also includes an etching of the taniwha Ureia on the piles. The essence of a taniwha is explained in Warne's article and explained that taniwha's can be seen as 'kaitiaki' "a deep concept that is approximated by ideas of guardianship and stewardship of the natural world.

BACKGROUND
Death of Ureia. Newspaper article 1927 and another in 1931.

Te Anaputa-o-Tainui. The name today is Tainui Cove, 6km north of Thames. It remained a place of shelter for centuries, but has mostly been destroyed following the goldmining and widening of the road. Further reading page 151-152 Te Takoto o te Whenua o Hauraki  by T Turoa and Te A C Royal.

Description of Ureia. The above book also has an appendix on Hauraki Taniwha and Tupua. Said to be a giant reptile that was said to be lured away from the Waikato River by a Hauraki tribe. At the entrance of the Hauraki Gulf, Ureia assumed the shape of a dolphin and guided the Tainui canoe and people to safety. Famed for his deeds, the Hauraki tribe are said to have become the envy of their neighbours, which later contributed to the 'death' of the legendary taniwha. 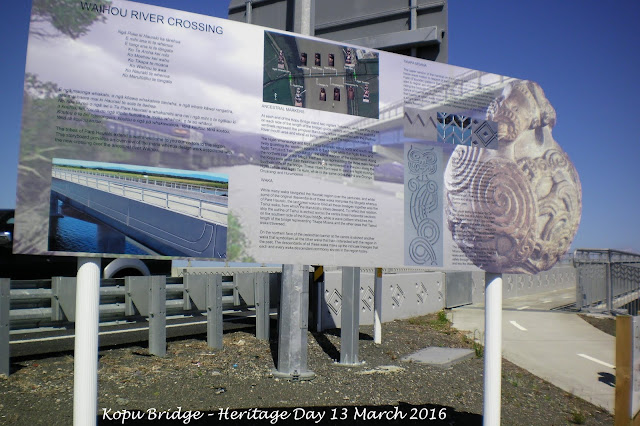 A descriptive board at the east end of the Kopu Bridge features information on the Taniwha known as Ureia.
Posted by Althea at 4:21 PM