Thames (NZ) - 'The First Time:' A motorcycle was seen

In May 1900, a motor cycle was introduced in Auckland. It was described as having a speed of four to thirty miles an hour.

There was ONE motorcycle in Thames in September 1903, the paper wondered why this improved method of transport had not caught on, in Thames. a report in Thames Star 7 July 1903, by a local maori, felt "Kapai, I think tat te machine for te Maori, eh?" He much appreciated the lack of puff necessary!
In 1908 the cost of a motorcycle was 75 Pounds, one lucky Thames-ite could buy a second-hand one for 45 Pounds.

A new booklet, hot off the press is for sale at The Treasury, Thames. (The Coromandel Heritage Trust)

Photo and location details are given, along with a few snippets of history; so that the reader can see the Thames of old that our ancestors called home. 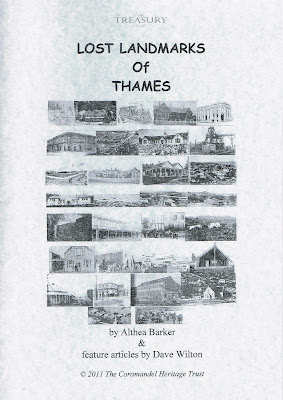 "Arbor Day (from the Latin arbor, meaning tree) is a holiday in which individuals and groups are encouraged to plant and care for trees. It originated in Nebraska City, Nebraska, United States during 1872 by J. Sterling Morton. The first Arbor Day was held on April 10, 1872, and an estimated 1 million trees were planted that day." Wikipedia

In New Zealand the, "first Arbor Day planting was on 3 July 1890 at Greytown, in the Wairarapa. The first official celebration took place in Wellington in August 1892, with the planting of pohutukawa and Norfolk pines along Thorndon Esplanade."


In the Thames Star 23/7/1892, the council discussion on Arbor Day was reported. All public offices were to have a holiday on 4th August 1892, in order to encourage the planting of trees. They hoped to show the colonists how important the care of the forests was, so many had been destroyed in the settlement of the country. The council felt this would just be used as a holiday.

On the morning of 4th August 1892, Thames held its first Arbor Day tree planting at Rocky Point, Tararu.
Mrs Wm WOOD planted an english oak, in total about 50 were planted.
Various trees were planted along the road, by the group that had assembled (click here for full report)

In subsequent years, there was ongoing debate and varying degrees of observation of Arbor Day in Thames.
On 7/8/1895, trees were planted at the Old Mens' Home at Tararu.

The 21/7/1909, was recorded in the Thames Star as the first proper celebration of Arbor day in Thames. The success coming from the involvement of Government and the Education Board. The tree planting was based at the schools around the town; hoping to share with the children the importance of the protection of trees. Trees were also planted in other areas, including microcapa on the hills. It was deemed they were most appropriate to withstand the attention of the many goats, that roamed the hills!

PS. My GGGGGrandmother was no doubt to blame for some of those goats. Susan TIMMINS, formerly Moran nee McDougal, an early resident of Thames, and often on the wrong side of the law; was otherwise known as "Goaty" as she tended the goats that roamed on the hills.

When did Thames get the telephone?
In the Thames Star 6/3/1891, it was stressed that Thames needed a Telephone Exchange, that it would be a great asset to the Town. In order to get one, they needed to get 25 subscribers and put forward a petition. The following week, the District Hospital and Charitable Aids Board decided to put their name forward as a subscriber.

By the middle of April 1891, 27 subscribers had come forward for the Telephone Exchange in Thames! The requisition for the exchange was thereby forwarded to the Commissioner for Telegraphs.The following month the reply was received, with a few conditions for the subscribers. The contract term to be three years, not just one and allowed in bigger centres. (see below)
In the Thames Star 31/8/1891, the difficulties over the subscriber term were resolved, and the exchange was proceeding. Alterations were to begin on the Post and Telegraph Offices, Government buildings. The bonus being, that the buildings were in a poor state, so it was welcomed that some upgrade would be happening.

In May 1892, discussion was underway in the papers about the hours the exchange would keep. It was felt 9am to 5pm would be pointless. By October 1892, the exchange was up and running, now residents at Tararu, wanted also to have this great new service!

Later in 1913, the next big excitement came with the Party Line System. Thames-ites once again eagerly joining the queue to try out this system at the Telephone Exchange.

Wow....not sure how long this has been available, but think it is part of a major map upgrade.
The details on TCDC webpage.

If you go to this page for online mapping
click I AGREE and then you enter map page
Take a few minutes to search and get used to it.
You can look by many options to look at properties

To go straight to CEMETERIES, click the option on top right hand menu
So far it looks like not all plot data is loaded and checking my family names, not all are yet showing
This feature is bottom or page..where you can search by name and cemetery

Still working on early sports of Thames, so a bit of hiatus on posts at present. A couple of photos to keep things rolling along. First is part of a postcard, which shows Thames before Toyota car factory was built just north of the Kauaeranga Bridge. Look further north on right to area that has been reclaimed and now is Danby Field and the Goldfields shopping Mall. Further north to Moanataiari before the development. In the distance is the point at Tararu.

The bottom photo is taken from the bridge just before present day Herewaka Street. The Maori Anglican Church on the right. In the middle the road to the old Barrett Street crossing, connecting Thames to Totara. The land on the top leftis where the majority of sports were played, in the early days of Thames. 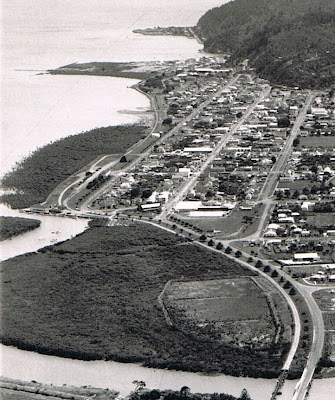 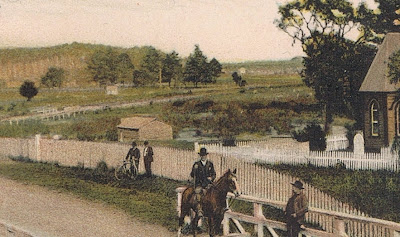 With the goldfields having opened on 1 August 1867, the New Year marked the beginning of a New Year and fresh hopes of riches.  To mark this great 'first' on the Thames goldfields, the landlords of the ten Shortland hotels that were at that stage open, offered free drinks. It was estimated that there were 5000 miners on the field by that time and on New Years Eve approximately 500 men took up the offer and drank the night away. The custom of first foot-in was duly accommodated along with the customary drink.

The day of 1 January 1868, then saw the commencement of the town's first sporting official event. The caledonian games commenced at 11am and ran for the next 4 days, on the flat land below James Mackay and Chef Taipari's residence in Bowen (later Rolleston Street)

A full account and details of the events are in the Daily Southern Cross Newspaper dated 6/1/1868
The first days results are below: