More names have been added to the WWII ROH list for Thames.
This is but a start, so if you find or know of other men and women from the Thames area who died during WWII - please let me know.

Check the latest names at the WWII ROH Page.

The names of men from Thames who are known to have received the Military Cross are documented in the book Gold Mine to Firing Line:
DALDY, Robert Henry 4/1222
MORPETH, Robert Nicoll 12/295
SERPELL, Samuel L 3/2874
TINGEY, Edward 16/515
WILKES, Thomas Mark 24/6

After the book was printed we also found that Robert Vincent HOLLIS 12/365, who lived in Thames after the war (and died at Thames), was also a recipient of the Military Cross.


Another find has led to the realisation that we have many more World War One soldiers and nurses yet to find. A 1958 Thames Star article dated 4th February, headlined "Runaway boy from Thames completes fifty years of solid service." Mr Alexander McRae FORBES had gone onto serve fifty years with the stationery firm Leighton Ltd in Auckland. Along the way serving with great honour in World War One and being awarded the Military Cross; while also later becoming a Justice of the Peace.  In 1958 Mr Forbes recalled his school days at the Waiokaraka School and the punishments dished out by Headmaster Isemonger. He went to school with the Verrans, Caseys, Ryans, Finlays and many others well known in Thames. 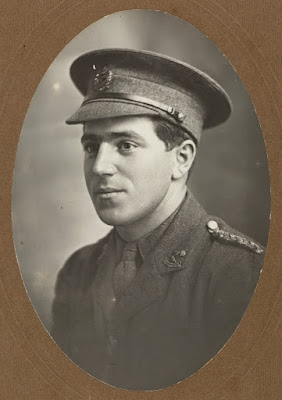 "As a barefoot boy of 13, he ran away from the confines of his then home in Thames, Mrs [K]ates' Grahamstown boarding house, and stowed away on the old Wakatere." The year was 1907, he obtained a job at Leighton's, who insisted he go back and get his family's permission! Forbes only break was then for the war.

The photo on the right is from the Auckland War Memorial Cenotaph and caption reads: 12/3218 Lieutenant Alec McRae Forbes.

Citation for Military Cross: 'For conspicuous gallantry and devotion to duty, on 29th September 1918, in the attack east of Ribecourt. He commanded the left front company of the battalion, and when a gap occurred between him and the troops on his left side, he filled it with his reserve platoon. Largely owing to his initiative, five 7cm guns, one 4in. howitzer, one 6in. howitzer and two naval guns were captured. After reaching his objective, he pushed forward to reconnoitre the company front as far as the Canal. His work throughout being most praiseworthy.'

The Cenotaph has extensive background information on Alexander including that he was "Aide-de-Camp to the Prince of Wales during the Somme Battle and Aide-de-Camp to Major General Sir George Richardson (after the war).

A remarkable story about a 'runaway' from the Thames.
Posted by Althea at 10:06 AM