A postcard for-sale online shows what appears to be a display/float for a parade, that was entered by Grey & Menzies Ltd. The title FIRST PRIZE marked on the card. The location possibly Auckland. 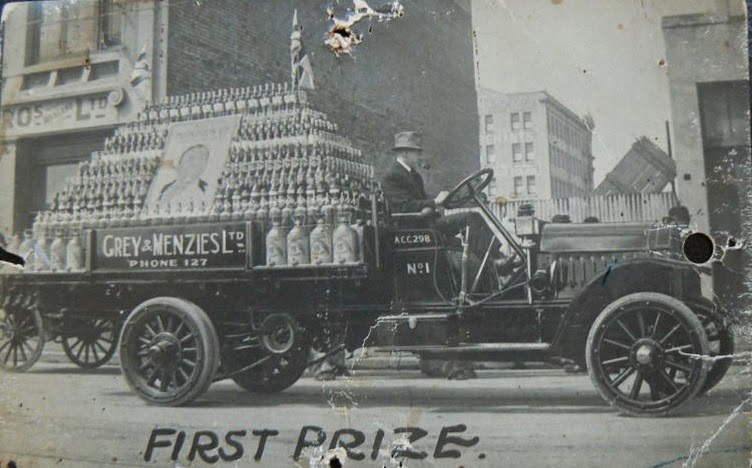 Thames and area were famous for the quality of many of their early cordials and soft drinks. Whether it was from confectioners such as Charles Palmer, Butement Brothers or Ballens.

Ohinemuri Journal 14/10/1970 by Len Jones:
"Menzies and Company - Cordial Manufacturers, Francis Street, Paeroa; Head Office Thames. Branches at: Te Aroha, Waihi and Hamilton. The Paeroa branch of this firm's business was established in 1895 and is conducted in a wooden building opposite the Railway Station. The plant consists of a five horse power marine engine, a boiler and a full supply of aerated water and bottling machinery. The firm supplies the districts of Karangahake, Hikutaia, etc. Mr. E.C. Morgan is the manager at Paeroa. (Morgan Bros. had previously owned a similar business in Paeroa.)

The commemorations for WWI will be covered over the months to come. Today plays an important part in the lead-up to World War One. One years ago Archduke Franz Ferdinand and his wife were assassinated.

On 28 June 1914 Archduke Franz Ferdinand, heir to the throne of the Austro-Hungarian Empire, and his wife Sophie were assassinated in the Bosnian city of Sarajevo. The fallout from this faraway event would ultimately claim the lives of 18,500 New Zealanders and wound more than 40,000. Places thousands of miles from home with exotic-sounding names such as Gallipoli, Passchendaele and the Somme were forever etched in the national memory during what became known as the Great War. Source: http://www.nzhistory.net.nz/war/first-world-war-overview/introduction


The Thames Star Newspaper reported the event on 29 June 1914. 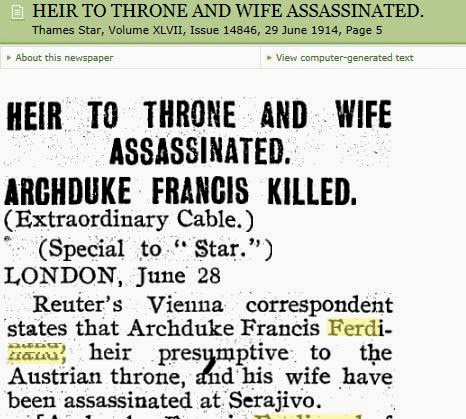 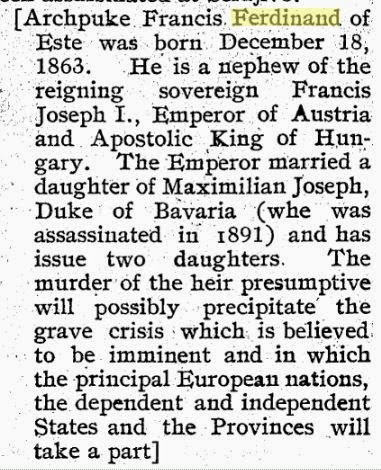 What we do have though is a large number of unnamed portraits taken by the Foy Bros of Pollen Street Thames. Sadly these are not named. These Maori postcards were very popular in the late 19th Century, in particular to send back to England to family back at home.

The Foy Bros weren't the only photographers in Thames who sold postcards that included Maori portraits. The Frith Portrait rooms next to Dr Kilgours in Pollen Street, in 1876 had a wide selection for sale.

An example of a Foy Bros specimen sheet available for viewing at the online Te Papa Collection, Wellington. Others are available via the Alexander Turnbull Collection. On the left is Tamati Waka Te Puhi and on the right Rena Punehu. 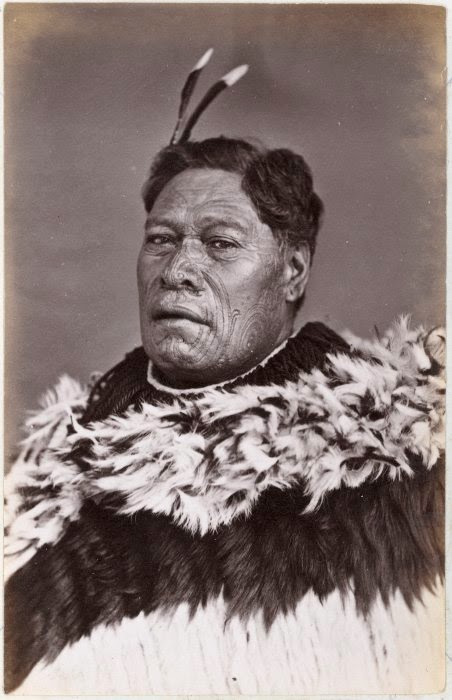 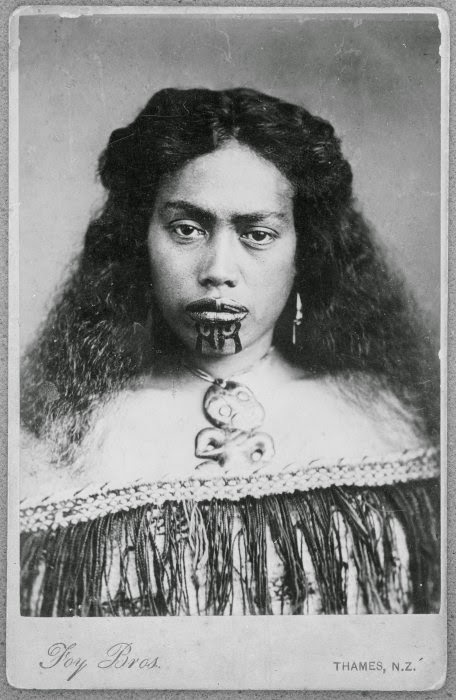 ﻿
Te Puhi lived at Manaia, and was active in movements to try and protect land ownership of the Ngati Maru tribe. "Te Puhi was active in protecting his tribe's land interests at Poihakena (Port Jackson was south west of Colville) on the western tip of the Coromandel Peninsula. In 1869 Te Puhi protested the purchase of the Hauraki foreshore by the Crown who wanted it as an endowment for Thames. Te Puhi claimed that Ngāti Maru had not extinguished  title to any of the foreshore." Source: Lindauer on line﻿
There are many others that haven't been identified. If you have copies of any, The Treasury always welcomes donations of images and any information you have on those people in the photograph. Who are they? What iwi did they belong to? Any descendants?

A previous post of an early view of Shortland, Thames, showed a large built up area from Mary Street South. There was a wide discrepancy in homes - ranging from tents, huts, cottages to very developed lots.

A higher definition photo shows that this house below, that was in the vicinity of Broad Street/Upper Albert Street in Grahamstown belonged to a wealthy, established early settler.
Source: Source: 'Sir George Grey Special Collections, Auckland Libraries, 7-A16669'

The house sits on a fully fenced plot, that has a well established kitchen garden along with other trees and shrubs. A water tank to provide much needed 'fresh' water, along with a large chimney to keep the house warm and no doubt for cooking. There is detailed fret work along the roof line, while two men stand outside, the owner probably nearer the back door. (see larger photo below) 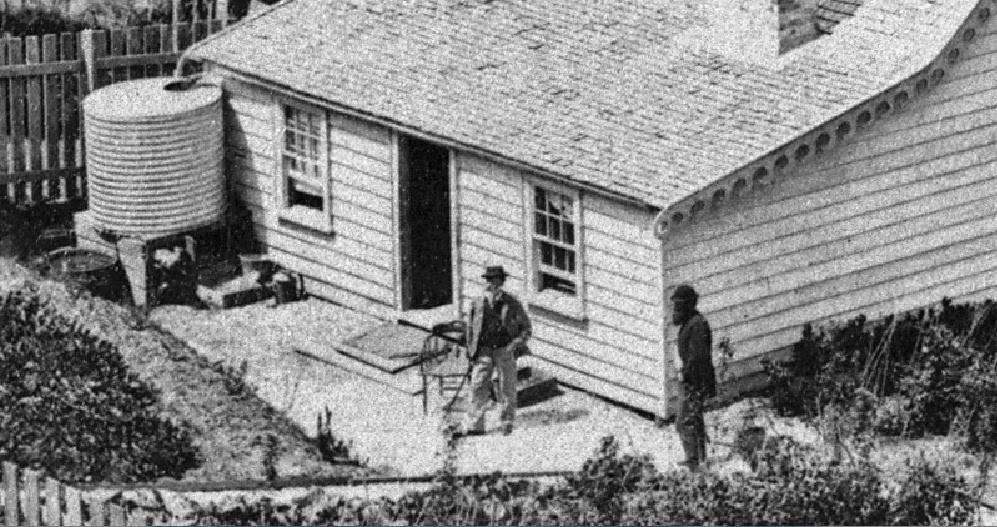 Who could the owner be? A mine owner/manager? Or perhaps an owner of a large business?
Posted by Althea at 6:43 AM

In 1939, Bowen Street was the section of road leading from the Hape Creek to south of Banks Street. Today it is known as Rolleston Street. World War Two had started and the posties would have been busy delivering letters around the town from their men overseas. Amongst the letters was this one sent from Auckland on 11 December 1939 to Miss Christophus (Crhristophus) of Bowen Street, Thames.
The post office tried to deliver it, but eventually on the 27/28 December appear to have returned the letter. The mystery never solved of who Miss Christophus was. Even with all the resources available today this appears still to be a 'brick wall' as to who this lady was. A possible conclusion being that the surname was changed, but many derivations exist. There were a few men by this name in the South Island during the early gold rushes, but they too may have changed their name to perhaps Christopher, Christoff and so on.  Directories, newspapers, electoral rolls to date hold no clues.


Do you know who Miss Christophus was? 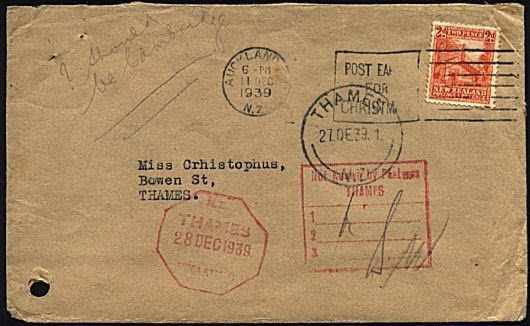 The 6th June 2014, is the 70th Anniversary of D Day WWII. It was timely that 70 years ago, Thames was hosting their first visit by the Governor General Sir Cyril Newall. He spoke of the hard times endured by all and the need to take time to celebrate the reported victories.
﻿
The entry into Rome of Allied Forces was celebrated in towns around New Zealand. The Governor General was meeting schoolchildren, when the Thames Fire Sirens rang out, along with the sounding of car horns.
Posted by Althea at 10:26 PM