Postcards added much value to the lives of early Thames-ites; sending and receiving...just one of things we have lost. What a wonderful source they have proved to be for historians and family researchers alike.

One hundred years ago today, the problem with holidays was often poor packing!
A special supplement published in the Thames Star 30/12/1911, had the answer to many traveller's dilemma - the ART OF PACKING.

While still looking for the owner of the first car in Thames, the name STEWART surfaced. A Maori family from Parawai, who owned considerable land within the town. Reportedly, they had the first car...this is yet to be confirmed. An obituary for Davie/David Stewart, also known as HETA REWITI, sheds a little more light on the family. Mr Stewart was a member of the Native football team that went to England.

The Thames Star 23 November 1911, was published at a cost of one Penny. It was a Saturday and the paper consisted of four pages.

Page One had a selection of general advertisements and news. There was news about the Komata Reefs, New Sylvia, Occidental and Talisman Mine at Karangahake. W Causley had new potatoes for sale, just in time for Xmas. If you needed a Ham, these were well catered for at Coakley's, plus Xmas cakes at B Halligan's Dominion Bakery in Pollen Street, Thames.

Page Two, was full of news for Thames. Sadly two Thames-ites had died and their funeral notices were present. Elizabeth CAMPBELL and Robert BATEMAN were both being buried Sunday 24/12/1911 - with burial to be held at Shortland Cemetery. School's had finished for the year and Prize giving details were given for Wharepoa school. Something to look forward to, were the Thames Jockey Club Races to be held on Boxing Day at Parawai.  Several other sporting events were scheduled, including Cricket and Athletics. If you needed a new house to rent or buy, lots of variety to choose from. The Empire Boarding House was for sale for 300 Pounds, but if money was short, an allotment at Kopu was available for 25 Pounds!

Page Three, lots of Christmas present ideas. Sweets from Palmers, Watches from Finlay's, fancy Handkerchiefs from Wood's, plus lots more. If in doubt Hetheringtons. offered lots of variety. Not forgetting the Christmas spirit, the Church notices featured prominently. If you needed a job, a waitress was required at the Shortland Hotel.

Thames (NZ) - Do you have any early Wedding Photos?

Do you have any Photographs of early Thames weddings (and neighbouring areas)?

The Treasury, Thames would love to add them to their growing photo collection. Any format would be okay, but preferred good quality print or digital image - with details of the names of the wedding party, church, dates etc... Contact details available here.

Sadly photos is not something my family have very many of, the earliest is my parents' wedding held 2 July 1949 at the St James Presbyterian Church, Thames.

Please, if you have any early wedding photos pre:-1960, consider a donation of the image to The Treasury.

Hot off the press, a new booklet available at The Treasury (Thames).
These are fundraisers for The Coromandel Heritage Trust, so you can learn a little bit about the history of Thames, while supporting this wonderful group and the preservation of Thames historical documents.

Title: PLAYING SPORT ON THE THAMES GOLDFIELDS: 1867-1920
The feature article is a transcript of an interview with Toss Hammond in 1967 by E Slaney and transcribed by L Bisset in 2010. Mr Hammond talks about early sport in the townships of Grahamstown, Shortland and Tararu. (Part of the Oral History Recorders' collection of interviews - held at The Treasury)

Many sports are mentioned, giving a few snippets of their early history, including those long lost. Such as polo and skittle alleys. Along with those that have remained core sports in the town: Rugby, Cricket and Bowls...to name but a few. Lots of family names included...maybe one of them is your relatives?

One thing that came through while researching this booklet, is how important sport was to our early Thames-ites and how they loved to gather to watch and participate. With New Year approaching, it is sad that we have lost that big New Year celebration and Family Sports Day that our ancestors enjoyed during their early days on the Thames Goldfields. 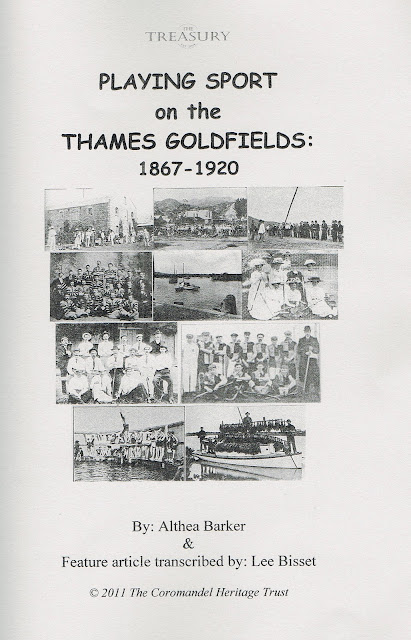 A big moment for Thames, or more importantly the thousands of Aucklanders' that flock to the Coromandel Peninsula over the summer months.  The one lane Kopu (Hauraki) Bridge is coming to the end of its life for car transport!

The big new concrete, two lane structure is open today (10 December 2011) for pedestrians and later in the week for vehicles. Prior to 1928 people relied on boats and ferries to quickly access the Hauraki Plains. The large one way, wooden bridge was built 1926-28 and was opened in May 1928 by the Prime Minister, Gordon Coates. The Kopu Bridge is on the NZ Historic Places Register as a Category One. "The Kopu Bridge is nationally significant as the only surviving road bridge of swing span type in the country. It makes a valuable contribution to the history of both motorised road transport and shipping, and is particularly significant for demonstrating early central government involvement in the development of highways. It marks the last stages in the history of major river transport on the Waihou, used by both Maori and Captain Cook."

Todays transport figues give 9000 crossings per day and 18,000 in the summer months - thus stretching the one way structure and the driver's patience to the limits. Full details and gallery of photos, for the new bridge is available at the NZ Transport Agency website.

The Coromandel Heritage Trust has for sale at The Treasury, a DVD covering the history of the Bridge - "Over Troubled Water, The Story of the Kopu Bridge."

Amongst the noise, dirt and hardships of the the Thames goldfields, there were sometimes the joy of riches and gold. For many this didn't eventuate, but in their new life, in a new land, there was often the need for some degree of reflection and reminder of 'home.' Often seeming out of place, it amazes me the number of poets there were in Thames. Previously mentioned was 'Rosyln' who was known world-wide. Another well known nom-de-plume pre 1900 was 'JENNY WREN'.
'Jenny Wren,' otherwise known as Jane Elizabeth HARRIS nee FRANCIS and later known as Mrs HARRIS-ROBERTS. (The link provides a full biography at the Te Ara Encyclopedia of New Zealand) Jane FRANCIS was born c1852 in London and came to New Zealand with her new husband Henry STILWELL. STILWELL had a nursery at Parawai in 1868. In 1873 Jane married Thomas HARRIS, a market gardener. From this time Jane's thirst for knowledge was nourished and expanded, with writing being the obvious vehicle. The messages were probably very political for the time, especially those coming from a woman. Jane HARRIS' beliefs took on that of those of the Christian Spiritualists and social reform; she was also a member of the Thames Mutual Improvement Society.

Jane HARRIS, spent time in Australia in the 1890s following her husbands death. Back in New Zealand, Jane married Charles ROBERTS in 1900. 'Jenny Wren' died in Paeroa 18/9/1942 aged 90. The death is registered at NZ BMD online as JANE ELIZABETH ROBERTS aged 89 years.
In her obituary, it is written, "she was one of the pioneers and founders of the spiritualist movement in New Zealand."

If you are looking for old photos of Thames, a visit to the The Treasury and the Thames Museum will always prove worthwhile. Searching for information on early sports in Thames, an enquiry to the Thames Museum, revealed lots of hidden treasures.

There are many photos of sporting teams including: Bowling cricket, rowing, rugby and hockey. Many of these are fully named; great news for the family historian!

One of my favourites was the photo below. Showing the early sports ground in Sealey Street, now part of Thames High School block. I'm still hunting for evidence of a wood chopping club in Thames; but it provides wonderful example of the wood chopping events that took place at different fetes and sports days of early Thames.

The Thames Historical Museum is open 1-4pm daily and contact details are available via the link provided.
﻿
Posted by Althea at 8:41 AM

THAMES:
A meeting was held Tuesday 15th November 1887, to form the BURNS CLUB. It was held at 8pm at Mrs SYMINGTON's Royal Hotel. Mr R N SMITH was chairman for the first meeting. The aims and objectives of the club were explained by Captain FARQUAHAR. (see report below), "to uphold the national songs, poetry, and dancing of their native country, and to counteract the influence of foreign music."
The inaugural meeting was held 15th December 1887, at the St George's Hall, Thames. A report in the paper next day, noted it had been a successful night, with some ladies also present. The evening ending with the singing of "Auld Lang Syne."
Posted by Althea at 1:32 PM