Meghan Hawkes has a new book on tales of Thames from the local newspapers. Called "A Line of Duck Boards" it is available from The Treasury at Thames; as well as the first book called "The Coming Year." For those coming to the upcoming Heritage Festival, there is a dramatisation of excerpts from the book - 19th and 20th March 2013. 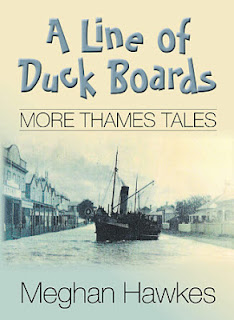 The Coromandel Heritage Trust has taken another step forward and nearer the building of the new archives building. The site is now cleared and ready for the building work!
Posted by Althea at 8:35 PM

Keep an eye on the HERITAGE FESTIVAL Programme - there are many new items.

**The Thames School of Mines is hosting several lectures:
There will also be evening presentations on gold field technology, Maori mining on the Thames gold field, and one from the Chief Executive of NZ Historic Places Trust, Bruce Chapman CE NZHPT on "Heritage Matters". 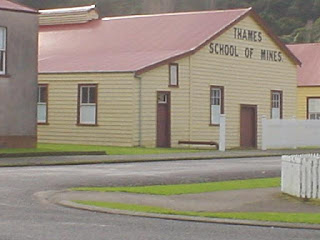 **The Coromandel Heritage Trust is once again holding a lecture series at The Treasury building in Queen Street, Thames. These include:

Monday 11th March 1pm - 2pm 'The Way We Were' - Thames Big Pump: 1872-1895 ('re-opened' 2012)
Historian David Wilton will speak about the Big Pump which was installed on the flat near Moanataiari in 1872. This followed the record production of the Caledonian Mine in 1871 and optimism was high that optputs would be as great at deeper levels. At the time, the pump was reputed to be the largest steam pump in Australasia. It provided services to mines on the flat until it was superceded by an even bigger pump - at Bella St - around 1895. Nearly forgotten for over 100 years, the Big Pump was to make itself known to Thames-ites in 2012, when its shaft collapsed under the main road north of town. This led to an intensive investigation and archaeological analysis of the site, which will be described in the talk.

Tuesday 12th March 1pm - 2pm 'The Way We Were' - Exploring the life of the early settlers at Opito
Local archaeologist Brenda Sewell will speak about early settlers from Polynesia who landed on the eastern coast of the Coromandel Peninsula, what they found and how they adapted to a much cooler climate. Excavations at Sarah’s Gully and Opito illustrated the changes that took place through various cultural layers covering about 400 years of prehistory.

Monday 18th March 1pm - 2pm 'The Way We Were' - CSI Thames: Archaeological Detective Work in Shortland
One of the fascinations of the many forensic TV programmes is the piecing together of many different bits of evidence to find out whodunit. Although archaeology doesn’t investigate crime scenes the methods are very similar. Renowned archaeologist Dr Caroline Phillips will explain what the archaeological evidence reveals about Shortland.

Tuesday 19th March 1pm - 2pm 'The Way We Were' - Doing our bit, Hauraki Goldfields 1914-1919
This presentation by Waihi historian Sue Baker Wilson provides a short summary of the formation of the New Zealand Engineers Tunnelling Company (NZETC) and their service on the Western Front. It is also an account of a journey of rediscovery and recognition. In 2012, the first WW1 unit specific overseas pilgrimage was made by Tunnelling Company descendants and supporters. Sue has a long term interest in military history and has constructed what is regarded as New Zealand’s first World War One e-memorial.

If you want to attend any of these lectures 'The Way we Were:
Venue: The Treasury, 705 Queen Street, Thames

During the Heritage festival this year, the Thames Library are holding an event called: Capturing the Present, to become the Heritage of the Future.

The details posted are:
Add your photos and memories to a digital archive collection of buildings and homes in Thames. Bring in your current (and old) photos of buildings around Thames - perhaps your home, your workplace, your school. We'll help you scan and upload them to the Thames Streets & Places basket on Kete Hauraki Coromandel. Material in this Kete is harvested to National Library NZ's National Digital Heritage Archive, ensuring that it will always be safely stored for future generations to access. Play your part in leaving a trail for future generations to explore. Staff and volunteers will be on hand to help you each weekday during the Festival, from 10am to 12 noon, at Thames Library.

The events for the Heritage week are appearing, more added every day; advertised as the Thames Heritage Festival 2013 and running 8th - 24th March 2013

There are guided walks of: Shortland, Grahamstown, Tararu, Hall's Reserve. Plus options via mini-van around the town and Thames Coast

Home brewing, market days and fetes, craft days, photo displays...plenty of things to do and see