It is a common misconception that the women on the Thames Goldfield were merely beavering away in the home, the servants of their hard working husbands. Without doubt life was hard, and keeping the house would have been a major activity, but the women in general were anything but quiet. An excellent book covers the lives of women at the Thames - To Find a Fortune, Women of the Thames Goldfield, 1867-1893 by Rosemary Killip. (Victoria University of Wellington 1995)

Women on the goldfield were busy in community activities, connected with the churches and schools, along with the many charitable groups that existed to help those less fortunate than themselves. Many fought for their rights, whether it be the vote, limiting the sale of alcohol, or better conditions for their families. The newspaper provided an avenue for many to have their say, through letters to the editor. One of Thames' best known names who advocated for change was 'Polly Plum' aka Mrs Mary Ann Colclough. 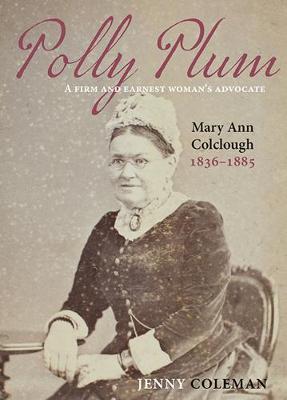 A book has been published by Jenny Coleman that covers the exceptional life of this lady, known to us as a school teacher at one of the first goldfield schools.

The opening passage in Coleman's book reads:
"'I am well known and everywhere known as a firm and earnest woman's advocate, and I am content and grateful to be so considered' - so declared Polly Plum in 1871. The women behind the pseudonym was Mary Ann Colclough (pronounced 'Cokely'), described by a major Auckland newspaper in the early 1870s as the 'best abused woman in New Zealand of the present day'."

Mary Ann Colclough nee Barnes was born in Middlesex, England in 1836. Mary Ann immigrated to New Zealand, arriving in Auckland in December 1857. The following year, Barnes sat her teacher's examination with the Auckland Education Board and received a first class first grade teaching certificate. She ceased teaching at the St Barnabus School following her marriage 9 May 1860 to Thomas Colclough. The life of Mrs Colclough is covered in Coleman's book, let us leap forward to her time at Thames.

School Life at The Thames:
In August 1873 Mrs Colclough came to Thames and took over as headmistress of the Kauaeranga Girls' School that was in the old Presbyterian church - at the corner of Rolleston and Richmond Streets, Shortland Town. The school had been started in 1868 by Mr McKee, then later became known as Kauaeranga Girls' School, although boys were also on the school roll.

Work started on the new community recreation centre back in September 2016, but behind the scenes fundraising and development for such a building, is said to have started 20 years previously.
From the demolition of buildings to the start of construction everything appeared smooth enough, but behind the scenes the weather and other construction issues occurred. Finally all issues were resolved, and at a cost of six million dollars, the building today was officially opened.

A timeline of the construction is available that shows what a major project this was. Prefabs moved, site prepared - to building opened! Many man hours and dollars were needed to make this happen. 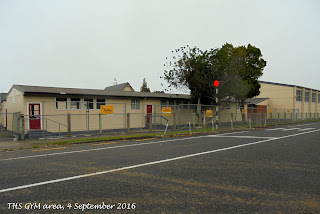 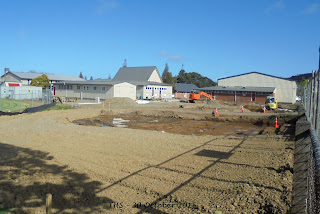 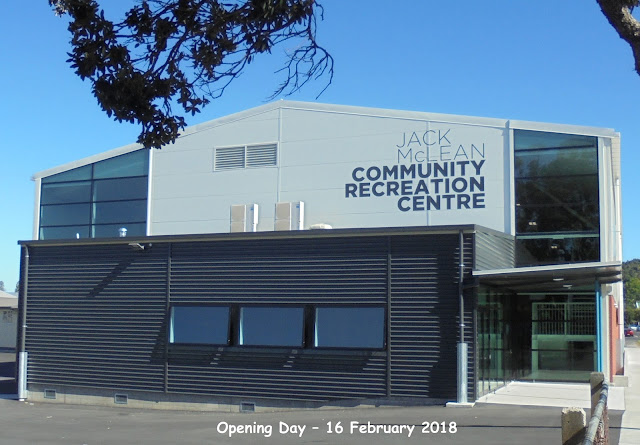 Today, Friday 16 February 2018, marked the opening of the Jack McLean Community Recreation Centre. A dawn blessing  by Ngati Maru kaumatua Wati Ngamane, followed by a full opening ceremony at 10am within the new gymnasium complex. It was shoes off as everyone entered the new hall. 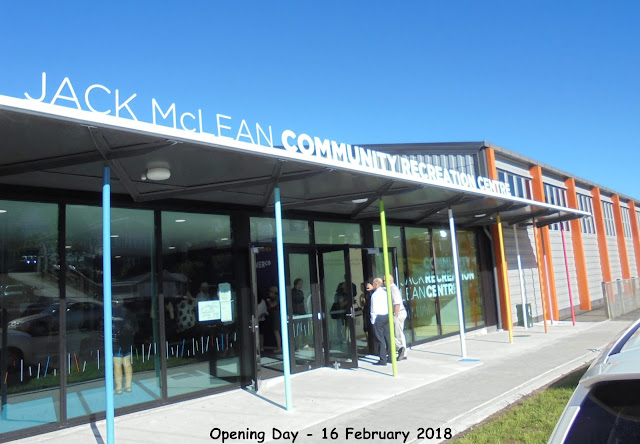 Everyone appeared impressed with the size of the new complex, that has various sporting courts marked out and ready for action! 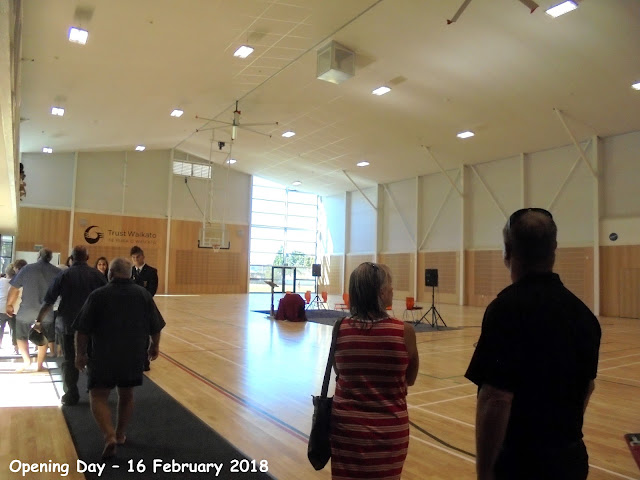 Very quickly the downstairs and upstairs seating was filled, with students, guests and members from the community. Plus most importantly members of the late Jack McLean's family. 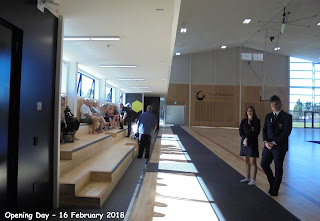 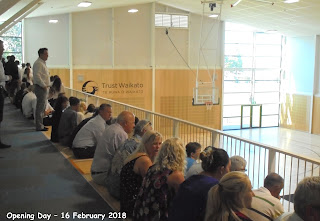 The view from upstairs is spectacular - dignitaries and the Thames High School kapa haka group were assembled in the centre of the hall. A karakia by Wati Ngamane was followed by a performance by the kapa haka members. 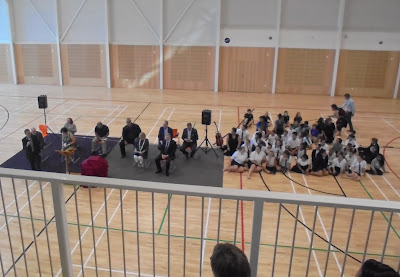 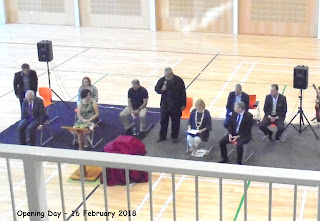 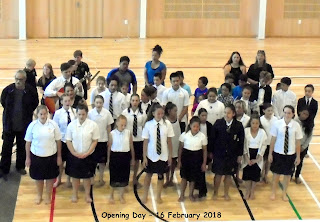 By this stage, the hall's seating areas were full, and the speeches and opening programme was completed. The hall is ready to meet the needs of the community and it was noted that bookings had already been made by various groups! 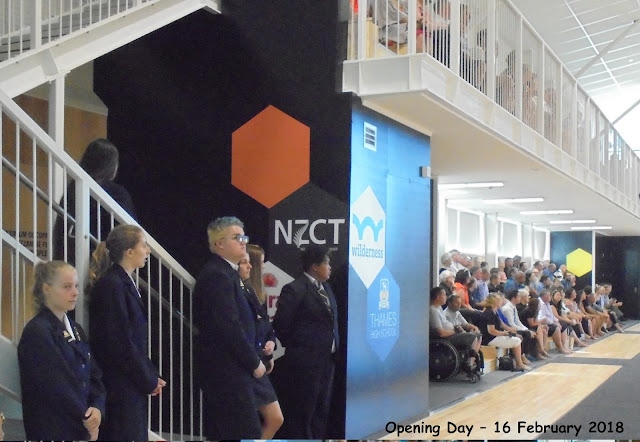 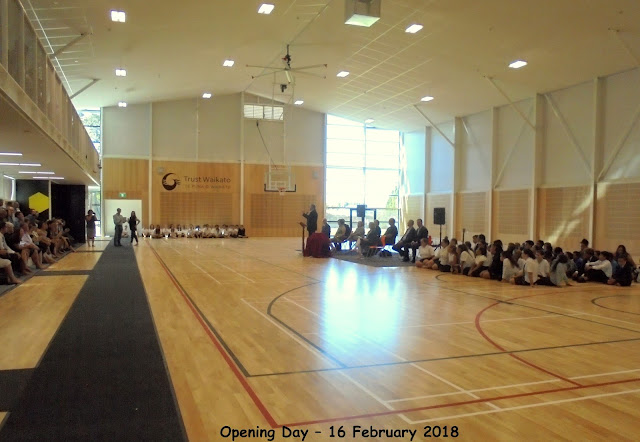 Not a bad effort! The Jack McLean Community Recreation Centre is open for business. 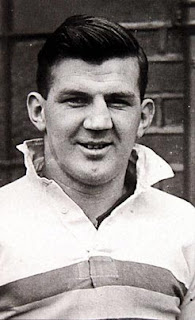 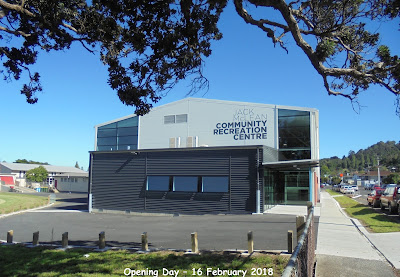 Background Reading:
TCDC Official news on the planned opening, including biographical information on Jack McLean.
Jack McLean - All Black - background All Back no 473 Wikipaedia info
TCDC Official News update on the opening. News that Jack McLean's All Black cap that the family had donated to the school previously, will now be on display in the foyer of the new community recreation centre. (photo below) 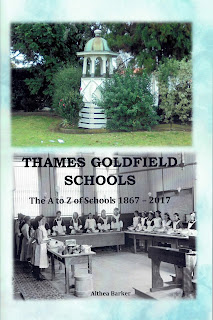 Finally a reprint of the booklet Thames Goldfield Schools is available.

The cover has been altered to include a photograph that was found after the publication of the first edition last year.

Not long after the goldfield opened in August 1867, families started descending to The Thames. The families on the whole were poor, but schooling while not yet compulsory, was a priority for most families. Private schools proliferated alongside those receiving special state funding.

A list of known schools has been collected, and a summary of each school is given in the Thames Goldfield Schools booklet.

There are few photographs of these early schools in action, so it was one of those special moments to find online Miss Millington's 1907 cooking class at the Thames Technical School. (photo below)

Some things never change at the Thames. When the streets were surveyed in late 1867, the plans appeared in the most part very easy to follow, with the majority of streets running in simple grid like pattern.
One of the more unusual layouts centred around Karaka Road and the connection to Rolleston Street. Over decades realignment happened on several streets, but this was one where houses had been built on plots that limited corrections to the road. 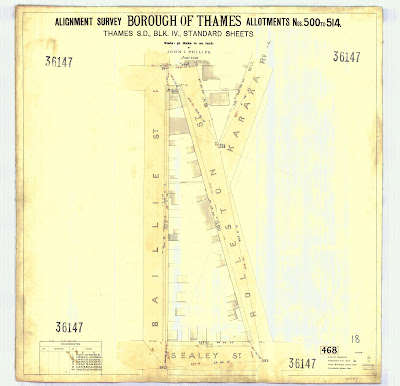 The 1889 Alignment Survey highlighted many problems around the town. The north end of Rolleston Street, had the challenges of two triangular shaped pieces of land - to the west with Baillie Street and to the east with Karaka Road.

The Post Office Hotel, tackled the problem by building a structure to fit the land at the corner of Baillie (Court), Mary and Rolleston Streets. On the Karaka Road side (where the Nurses' Home sits today), the site was filled with a boarding house, hall and a residence.

Today, the sharp bend into Rolleston Street remains, as it did in the 1900s photograph below. 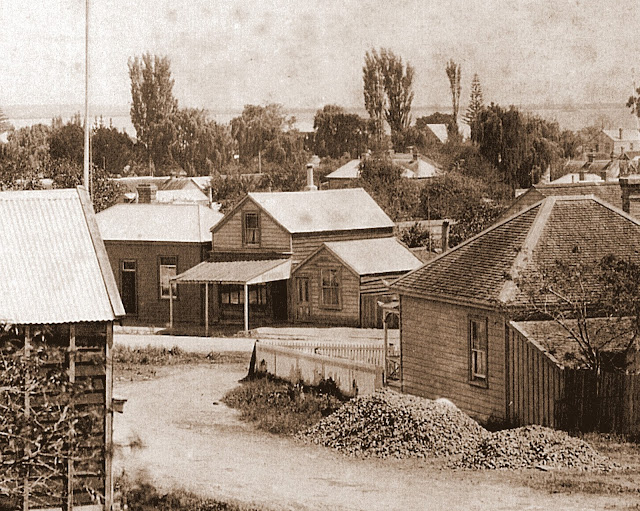