Dramatic changes underway to the outward appearance of the Treasury complex, Queen Street, Thames. The northern part of the concrete base has been poured and the preparations have been made for the southern end section. At present a temporary wooden barrier has been erected, which allows the passer-by to see how impressive the fence will be.
Opinion on the style of the new Archives building continues to divide some, the new fence has the opportunity to put this to rest and demonstrate how the the two buildings and time periods can blend together. 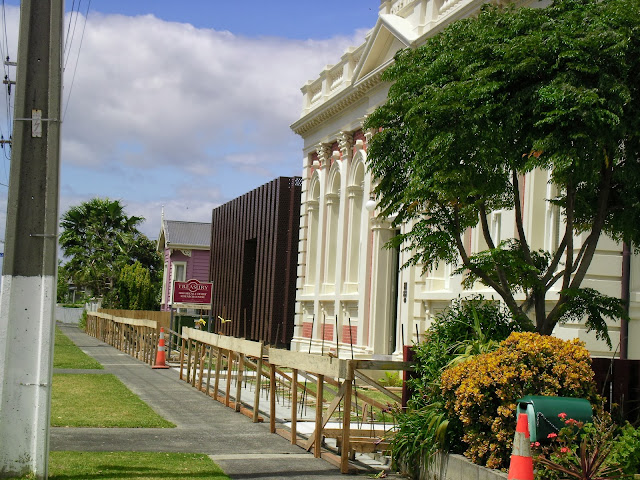 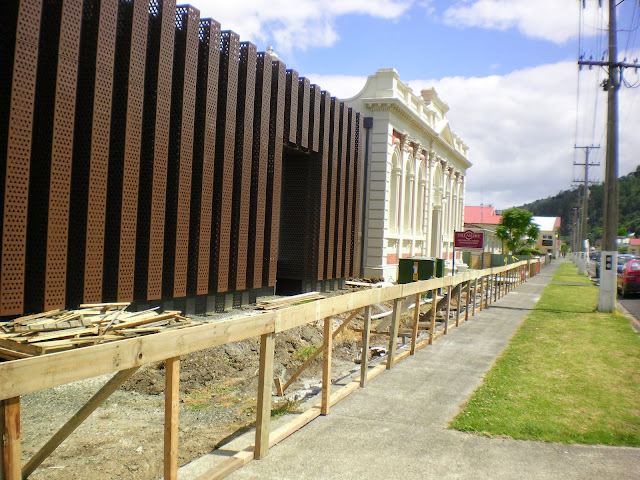 For past photos of the development: CLICK HERE
Posted by Althea at 12:37 PM

Ever been on holiday and wondered why all the photos seem of little interest to others? Include family in them and people have a focus and immediate interest. The photos of Thames can sometimes be the same, so people often plead have you any photos of my family or where they lived?
So the question today..do you have any family photos that show the house you or you Thamesites lived in. Just as shopkeepers liked to stand outside the shop when a photo was taken, many families stood outside their home for a family photo.
If you have any photos to share, please let me know
I'll include them here and with permission pass them to The Treasury for their collection.
Posted by Althea at 9:23 PM 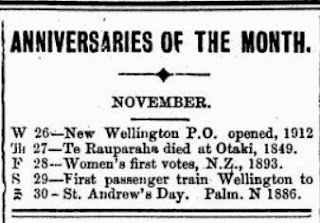 Drum roll please....
There are now over 250,000 entries in the Treasury Index!!!!
I've mentioned before the hive of activity at The Treasury on a Tuesday morning, well here are the results. Multiple resources have been indexed, to give an amazing total of indexed records, achieved in just one year.

Sincere thanks must go to the Hauraki Indexers, who for many years met weekly at the School of Mines. Now The Treasury has a group of indexers who have continued on with the task, to help make researching the Thames-Hauraki area even easier.

Give it a try now.
Click Here and enter a surname or topic.
Did you get many results?
If you want to know more...call into the Treasury at Thames or send them an email.
﻿

The 22nd November 1913 was a Saturday, here are some snippets from the Thames Star one hundred years ago.

Many Thamesites turned to farming after the mining finished, especially as the land on the Hauraki Plains was drained and developed. Some men returning from war were lucky enough to get a land ballot, that would set them up as farmers for generations to come. Places like the libraries around Thames have books that cover many of these stories, as well as The Treasury. Information can be found in book, maps and oral history format. The electoral rolls also give information on early farmers around the district.
Books such as "The Hauraki Plains Story" by R E Tye  and history books covering the Hauraki Plains by Ken Clover - have been indexed at The Treasury.
The photo below is labelled as the first cattle sale on the Hauraki Plains in 1912. It was labelled as A SURE SIGN OF PROGRESS.  Bert Dunlop conducted the sale on behalf of the Farmers Auctioneering Company. Until the late 1900s there were numerous sale-yards all over the Coromandel Peninsula/Hauraki area. They were busy days. Places like the Kopu Sale-yards full of stock. Times have changed and while some still exist, their role has changed.
﻿

In 1910 large blocks of land had gone on sale at Pipiroa. Click on the link to view the full details of the sales. If you right click and save the image, you can enlarge it and view in detail the farming blocks that were for sale.
A small snippet of the map is below.
Posted by Althea at 12:29 PM

Today the Hauraki Rail trail allows cyclists of all ages to travel the old rail track pathways around the Thames-Hauraki area. In days gone by these tracks were busy routes for the train transport of people and goods.

On the 5th February 1915, cattle caused a train derailment at Tirohia (8 miles from Te Aroha), that luckily caused no serious injuries to the passengers aboard the train. At first it was rumoured that three people had died, but this proved to be false and only the driver suffered minor injuries. The evening express to Thames was still able to use the line, later in the day.

A full report was in the Thames Star 6/2/1915, luckily the train was travelling very slowly at the time of impact. Residents in the locality had "accommodated the lady passengers." For further train memories: VIDEOS available of the train at Shortland Railway Station
Posted by Althea at 6:43 AM

The town's fire siren has just given a short blast to mark the 11th hour of the 11th month.  Younger generations may wonder why and not even have heard of ARMISTICE DAY.

After four terrible years, the First World War finally came to a close with the signing of an armistice between Germany and the Allied Powers on 11 November 1918. On the 11th hour of the 11th day of the 11th month, the guns famously fell silent. New Zealanders celebrated enthusiastically, despite having recently celebrated the surrenders of the three other Central Powers – Bulgaria, Turkey and Austria-Hungary - and the premature news of an armistice with Germany.
The celebrations for the various armistices had similarities with each other, with those held overseas, and with other celebrations in the past or near future. Bells rang, bunting went up, songs were sung and speeches made. More organised celebrations came later in the day or over the following days. Most people anticipated the armistice with Germany and made plans in advance.
Variations in the celebrations reflected the perceived importance of the various surrenders, the depth and spread of the influenza pandemic, and the forethought given to the preparations. The limited amount of advance warning and the disruption caused by the influenza pandemic contributed to the enthusiasm with which New Zealand’s official peace celebrations in July 1919 were embraced.

The first commemoration in 1919 must have been a very touching moment for people all around New Zealand and Thames people all stopped and remembered. The people of the wider Hauraki region had lost approximated 550 young men, with hundreds more injured or ill with war related illnesses. It was a period that families would not forget.

The volunteers at The Treasury in Thames, are receiving wonderful examples of WWI memorabilia. A wide assortment of photographs, letters, pay-books, diaries and family histories. Family names to date include: Anthony, Brokenshire, Cornes, Danby, Jenkin, McCall, Milne and Paterson.
Amongst the photographs provided by the Thames Museum for the WWI photo register, was one showing the mascot of the Auckland Mounted Rifles. The photo is of H CLARK, believed to be Henry John Clark of Hikutaia, Thames.  Trooper Clark was a member of the Auckland Mounted Rifles and embarked from New Zealand on the 14th December 1914. He was discharged on the 5th September 1916 and later died in Auckland on the 12th June 1948. His given age on enlistment was 38 years, and family details included a wife and two children.
There is a story in the newspaper of how the Auckland Mounted Rifles adopted a Great Dane as one their mascots in 1916. Rona, the dog was allowed to visit a sick comrade in hospital, after starving herself for three days when her handler was hospitalised in London.

Photos and stories about a selection of WWI mascots can be found at History.net (scroll down page). Animals included horses and even cats. Snowy the cat, was the Tunnellers' mascot.

Remember to keep looking out for memorabilia related to the WWI soldiers from the Hauraki, or consider a short story about any ancestors you have, that served in WWI from the region. These will be included in the Treasury Collection.
Contact details for further information
Posted by Althea at 7:29 AM

One hundred years ago, the paper was full of advertising luring the customer to the delight of summer clothing and shoe requirements. On a sadder note the rumblings of strikes and unrest filled many columns. It was nearly a year since the unrest at Waihi, during the 1912 Miners' Strike.

ANNIVERSARIES of the MONTH:

Snippets:
Posted by Althea at 6:39 AM

Thames, like many areas around New Zealand has had many people over the years involved with amateur radio. There are several oral histories at The Treasury that give details of some of the people who were involved.

An interesting card appeared on an auction site today for a radio sold from Thames. The radio was supplied by A A LOCKIE of Bowen Street, Thames. His call sign was ZL1JL. Bowen Street is today known as Rolleston Street - it was the portion of Rolleston Street that was south of the Hape Creek Bridge.