As the heritage festival weekend started to come to an end, a last lecture in the series was held at the Thames School of Mines. First, its great to see this room used for lectures/talks, and the atmosphere certainly sets the scene for a wide variety of topics. 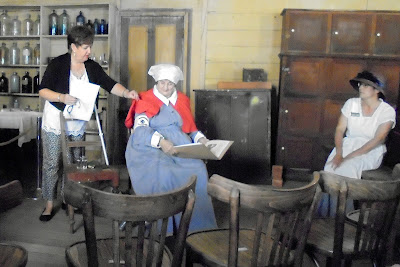 Today Margaret Reid and Althea Loveday presented poems that they and others in their poetry group had written. Most of the group are nurses (current and past), with a few others welcomed to this new writers group. The poems were well researched, thus providing a historical view of the town. From mining to forestry, hotels to brothels, wealth to poverty, plus the role of women on the goldfield - a wide range of themes were covered.

In the photo (right) Althea is showing the Thames Hospital armband on the WWI Commemorative uniform that Margaret is wearing. The nurses must be commended for their attention to detail, and the way they have kept the memories of our WWI Nurses alive.

Below are three photos showing nurses from Thames Hospital wearing the armband in the 1910s. It appears to have been something not uncommon for the time. Was it a patriotic thing? Or part of recognition for having trained at Thames Hospital School of Nursing? Auckland Hospital also had an armband during this period. 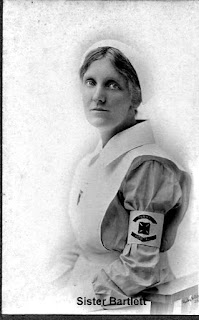 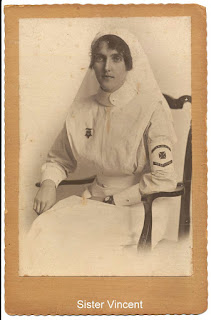 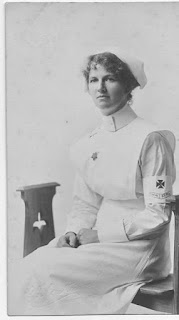 The morning lecture finished with an overview of Sperry Home by Althea Loveday. Janet Waddell and her daughter Bella Smith delivered over 200 babies at their private maternity home at Sperry Lane. 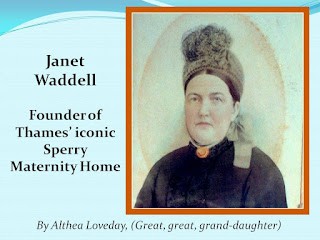 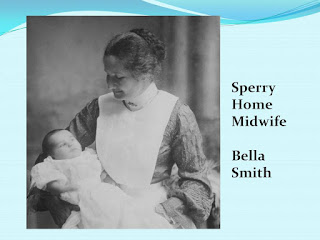 Special thanks to the Thames School of Mines for their hospitality and the refreshments that were available at the Thames Bridge Club.
Posted by Althea at 4:27 PM