Thames (NZ): Totara Memorial Park Cemetery - When was it opened? Are all names recorded? Part One

Over several months we have become aware that there are burials at Totara that are for some reason  are not on the local council records. The following research aims to answer some of these questions, and with the help of readers to continue learn more about the early use of Totara Point as a burial ground. 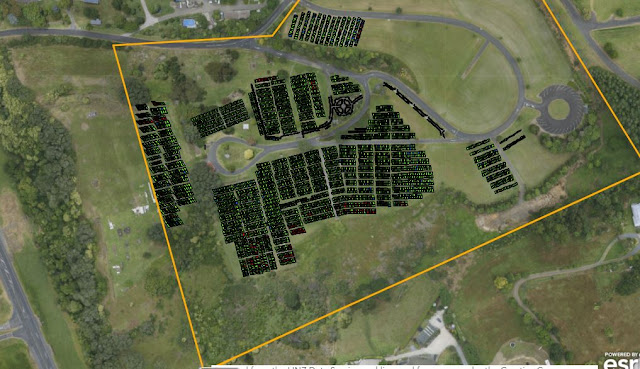 The land marked within the yellow boundary lines above forms the Totara Memorial Park Cemetery.

To the left of the western boundary line stands the Te Totara Urupa. As we will find there is at least one large European family plot in the urupa boundary area, whether there are others is not yet clear.

Timeline for the opening of Totara Cemetery:

It is first necessary to look at the background behind the opening of the Totara Memorial Cemetery.

Totara Cemetery work began in 1920 and took until 1930 to be considered open - During this preparatory decade burials at Totara were undertaken.

The announcement that the Totara Cemetery, was officially a cemetery appeared in the Thames Star newspaper Friday 29 April 1932. 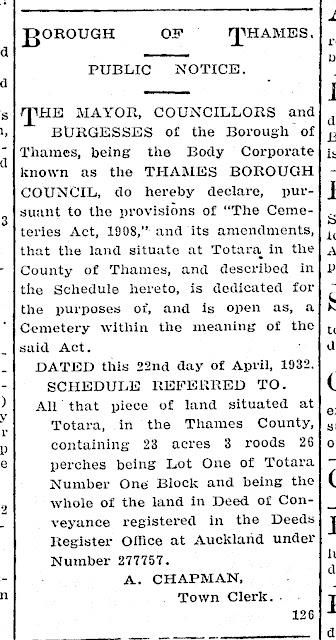 "...The land situate at Totara in the County of Thames, and described in the Schedule hereto, is dedicated for the purposes of, and is open as, a Cemetery within the meaning of the said Act.
DATED this 22nd day of April 1932."

So there it is, over a decade from the first burial within the Totara Cemetery boundaries and in the allocated plots, the cemetery was OFFICIALLY open as at 22 April 1932. 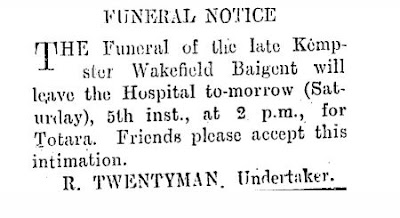 The burials above are on the TCDC database, the plots are all in the official cemetery boundaries - with the exception of Frances Tizard. The Tizard block will be discussed later. However there is an interment that is known to have taken place 1927-28 for one month old Evelyn Tizard on Block 25 Plot 7. A letter with the burial book dated 1 September 1929, cited by the NZSG transcription team back in the 1990s, stated that Evelyn had been interred within the cemetery in the previous 12 months. (snip from NZSG Burial Record transcription below)

Pre 1932 Burials at Totara Point / Te Totara Urupa:
Below is a list of burials reported in the local newspapers, that are not in the main cemetery and/or took place before the Totara Cemetery was officially opened. Those '*' are  in the Totara Pa Urupa and therefore not included in any Thames Coromandel District Council Records.

What we are looking for is the names of Europeans who have been interred possibly outside the official boundaries and are possibly on the western ground. Speculation at this point, but hopefully questions will lead to answers.

This list will no doubt grow as I use different search terms at Paperspast, but in the meantime, the answer to why there are Europeans buried outside the Totara Cemetery boundary, on urupa land, has been found. This will be covered in Part Two - coming soon!!!
Posted by Althea at 9:52 PM