Have you got your Miner's Right? Well, 150 years ago you paid one pound for a Miner's Right that legally allowed you to mine a chosen section of land. On behalf of the Government, James Mackay (Gold Commissioner) had negotiated with local Maori to allow prospectors to mine certain blocks of land in the Kauaeranga area.

"Each miner's right allowed one man to claim an area 50 feet by 300 feet and claims were usually marked by the number of mens claims it represented."  (Goldrush to the Thames New Zealand 1867 to 1869" by Kae Lewis)

Men would usually join together to enlarge their claim land size, and hopefully increase the chance of success. The claim area would then be referred to by the number involved - for instance 'five men's ground'.

The New Zealand Herald 9th August 1867 reported that there were about 75 men on the field and that several had already taken out a 'right'.

One hundred and fifty years ago on 15 August 1867, James Rogers (MR 48), Charles Snowden (MR 49), Henry Sanders (MR 50), and Alfred Newdick (MR 51) were all issued with their Miner's Right. They were to be in force until 14th August 1868. (Copies from Miner's Rights Butt Book at Auckland Archives below) 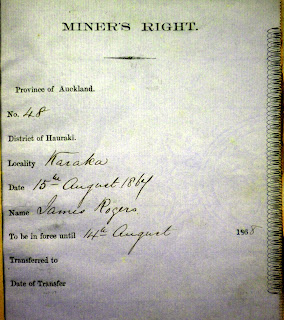 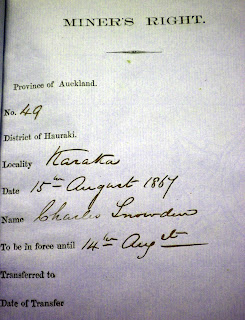 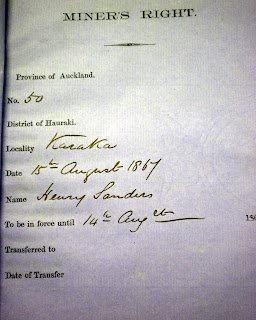 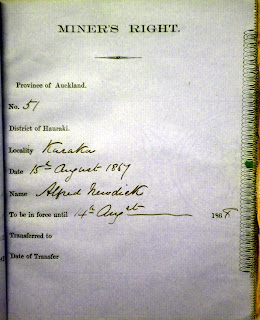 Kae Lewis' 'The Goldminer's Database' contains an index of the names of over 50,000 goldminers from the goldrushes of New Zealand spanning the years 1861 to 1872. 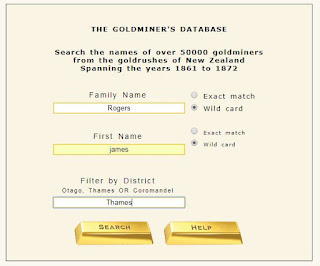 Maybe you don't know whether your ancestor tried their hand at mining on the Thames; well it would be worth checking! The old saying goes, that most settlers diverted to the field to try their hand at the Thames, before heading to other parts of New Zealand.


Search results will appear. In the case of James Rogers who had Miner's Right 48, the information is shown below.
As you can see it matches the information on the Butt book and what would be recorded in the main register.

In those first few years after the goldfield opened, land to mine was at a premium. You paid one pound for the right to mine your plot of land, which you would be obliged to peg out and work, otherwise forfeit the claim. Kae Kewis has full details on the Miner's Rights and their conditions.
The system has in principle continued for decades. My father had a miner's right in the 1960s, and was always following an amazing reef - always hopeful of discovering the next big find! Weekend prospectors have roamed the hills since the goldfield first opened 1st August 1867. 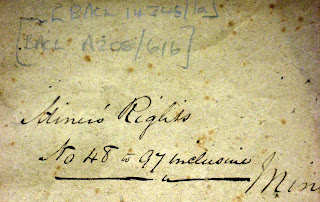 These Registers are available to view at Auckland Archives, and the availability of records can be checked by searching at the Archives New Zealand website. There is a wealth of mining related material. Suggested search words: Surnames of your relative; "Thames Mining"; "Miners Rights Thames"; and the Name of Mine or Claim you are researching.