While visiting the Thames Small Gauge Railway, I noticed a beautiful old photo of the Thames School of Mines, on an information board. 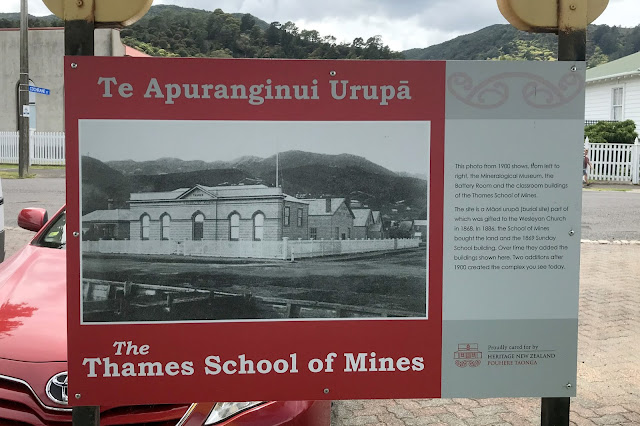 The heritage sign in the carpark opposite the west end of Cochrane Street.
The text reads:

"This photo from 1900 shows, from left to right, the Mineralogical Museum, the Battery Room and the classroom buildings of the Thames School of Mines.
The site is a Māori urupā(burial site) part of which was gifted to the Wesleyan Church in 1868.  In 1886, the School of Mines bought the land and the 1869 Sunday School building.  Over time they added the buildings shown here.  Two additions after 1900 created the complex you see today."

The description is interesting considering the uproar that was caused when the Church sold the land to the School of Mines, considering the courtcase/s to try and stop the sale and return the land to the tangata whenua.
Te Apuranginui Urupā
On the Thames Thames School of Mine website the background to the name of the land is given.
Chief Te Apurangi's descendants lie in the sacred urupā.  Te Apurangi was a most respected chief, and is represented in a carving in the House of Hotunui which is now housed in the Auckland war Memorial Museum.
Tarakonaiti Urupa
In a report written by John McEnteer and Taimoana Turoa in 1993 (Nga Taonga O Te Kauaeranga Maori Heritage of Thames) the name of the site is given as: Tarakonaiti Urupa. A summary of the points given in the report are:
There are multiple reports regarding the 'land sale' that can be found online. Here is but one of the justifications reported for the sale:

Report on Petition of Hohepa Paraone and Another.
Petitioners, who are Natives of the Thames District, state they conveyed a piece of land at the Thames to the Wesleyan body, as they understood, for religious purposes only, but that they learn now with deep regret that it is proposed to sell it to the Education Board in Auckland, and they pray for such relief as may insure that the land in question shall be devoted to the purpose originally intended.
I am directed to report as follows:—
That, while the Committee have some reason to think that the proposed sale or transfer of the land in question is not in accordance with the intention under which it was originally given, the Committee do not feel able to recommend any course to the House which would have the effect of depriving the trustees of legal rights which are not denied by the petitioners.