For some time I have had 'story on the pumphouse' on the urgent to-do list.While it has been covered before, a new photo allows us to take a second look at the Bella Street attraction.

The problems of groundwater and the impact it had on mining are discussed. Hence the "Hauraki Mining Company constructed the Thames Hauraki Pump House (now called the Bella Street Pumphouse) at the site of the Queen of Beauty Mine, in 1898." page 8
The Bella Street Pumphouse Society bought the old building in 1990 and have worked tirelessly to restore and replicate many of the old pumphouse features. Replacing the poppet head is the next thing on the agenda for the hardworking society.

The poppet heads that were dotted around the town, were built over mine shafts and housed the mechanism to lower cages up and down the shaft - carrying miners to and fro, along with transporting ore to the surface.

The Poppet head and Pump House under Construction
Now at last to the photo that triggered the need for the post. The poppet head looks near completed, while the boilers are just arriving - the building of the pumphouse underway. 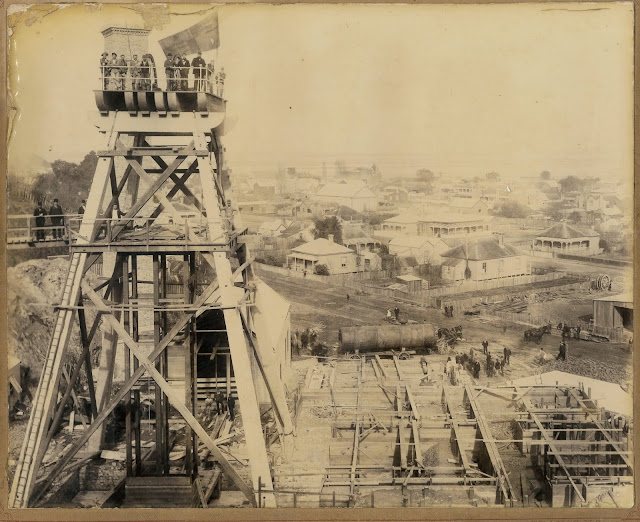 There is so much to see in the photo: the houses along Bella and Mackay Street at the top; the boiler and team of horses that had just come from A & G Price Foundry: and the second St James Church has been moved to face Pahau Street (awaiting the building of a new church). Plus much more!

Poppet Head facts:
"The four legs of the poppet head were made of kauri. They were approximately 19.8m long measuring 76cm at the base and tapering to 45cm at the top. Each leg was set in sole pieces and were firmly embedded in concrete. The whole structure was firmly braced together. On top were two sheave wheels 2.7m in diameter. The whole structure was capable of bearing a transverse working strain of 400 tons."
Source: https://www.bellastreetpumphouse.com/about-the-pumphouse.html 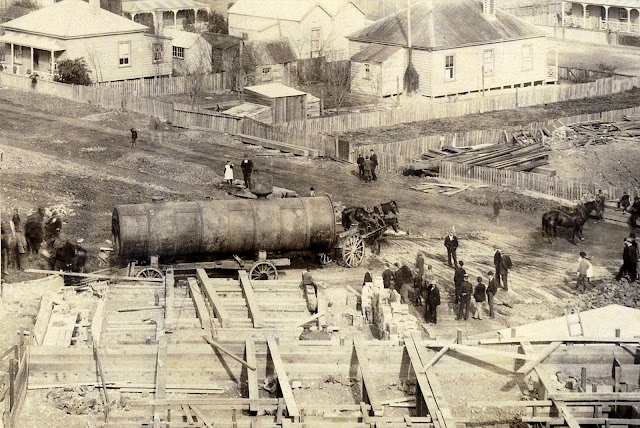 THAMES STAR, 31 MAY 1897: Work on concrete foundations for pumping plant advanced, plus good progress on the brickworks which included the large chimney.

THAMES STAR, 26 JUNE 1897: The third boiler had been delivered. Photographer Mr Foy was on hand to take photographs including some of the poppet head and chimney. 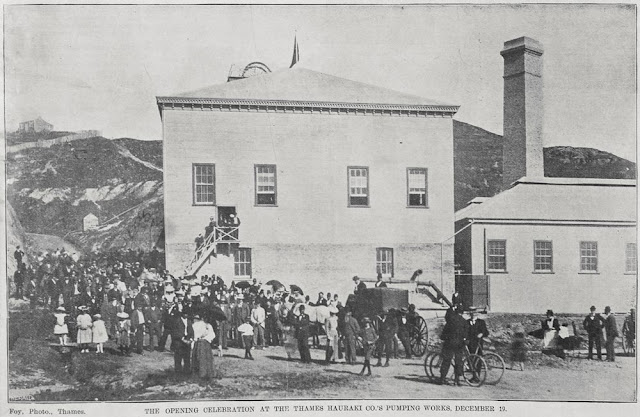 Below: 2016 view of the Bella Street Pumphouse. 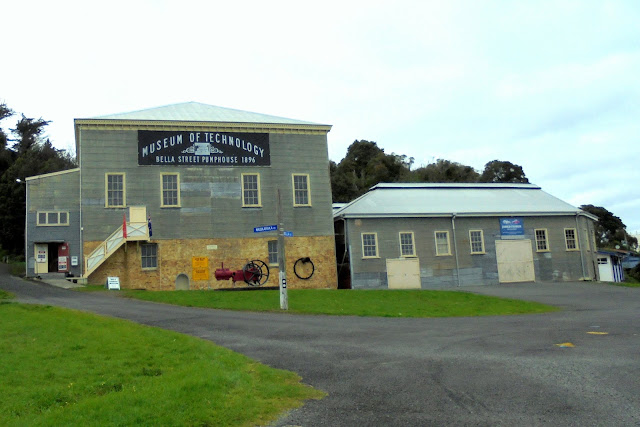