Sport played an important part in the life of the settlers on the Thames Goldfield. Times may have been hard but as a community, both young and old, Thamesites relished coming together and participating in the wide range of sports that were on offer.

Introduction:
One of these sports was Gymnastics. Below is an excerpt from Playing Sports on the Thames Goldfield.

"In 1889 a group got together and formed an athletics class which was known as the Thames Amateur Gymnasium Club. By December 1890 the membership was 100, Mr H Cordes was club secretary. The leader/instructor was Mr Daldy McWilliams.

On 3rd December 1890, the club gave their first private exhibition in the Volunteer Hall at Shortland, which was then followed by a social. The exhibition included: dumbbell exercises to music, roman rings, horizontal bar, trapeze, Indian clubs and boxing. A highlight was the performance by Mr A Gubb when he, “did a most daring performance, making a flying leap from the single and landing in a sitting position on the double trapeze, which was received with great applause.”

In January 1893 there was a social to open the Thames Amateur Gymnasium Club’s season at their Richmond Street clubrooms, and a benefit night was planned for Mr Daldy McWilliams, as a thank-you for his services as instructor. There was also a Ladies’ Calisthenics Class, giving a performance of Indian clubs. The junior boys (8-14) were a junior division of dumb-bellists. Mention is made of the delight that the children had for this sport, noting that this education was lacking in the schools. “Apart from the value of the instruction imparted and its importance to health, the club also exercises a great moral influence, in as much as it cannot fail to keep many lads off the streets at night time, and consequently out of mischief.”
Advertisements for the club cease July 1894; did they become part of the Athletic Club or disband? There was another gym group, operating out of the Naval Hall in February 1891, run by Mr Wm Connon, with the aim of helping their members to become very efficient gymnasts.

Other clubs in the town, such as rowing were also advertising gymnasium facilities. In May 1900 there was mention of another new club, the Thames Gymnasium & Athletic Club (Grahamstown), to be run by W Woodward and T Tasker.

The Thames Young Men’s Club opened next to the Post and Telegraph Office in Queen Street in 1904, and they also had a gymnasium.

Later in 1915, the Thames High School Gymnasium, which was part of the new school in Sealey Street, provided much needed gymnastic facilities for the community. Over the years a wide range of gymnastic disciplines were undertaken in Thames, at multiple venues. It would appear this was very popular sport, with many Thamesites."

The gymnastic discipline featured is Indian clubs. This was one of the most popular display performances at the Thames; and regularly practiced at schools and clubs.


The photograph shows children proudly posed with their 'Indian Clubs'. Were they a display team, members if a group? Are the older girls the leaders, or instructors?

While we have talked about Gymnastics, for women the term Calisthenics was more often used. In the Thames Advertiser 25 August 1892 women from the local Calisthenic class wielded the clubs with great skill. 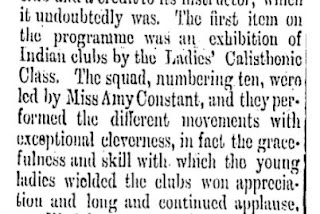 Thames Advertiser 25 August 1892. Paperspast.
Closing:
The importance of exercise was an early part of our school curriculum, in Thames and throughout New Zealand. In 1884, it was noted that Indian Clubs were to be added to the apparatus used in schools in the Auckland District. Mr Sullivan, the school Inspector noted, "I become everyday more and more impressed with the value of gymnastic exercises, especially for girls."
Posted by Althea at 9:33 PM