There was an interesting article on page 17 of the Herald on Sunday (28 July 2019), 'Ten Pound Pom' Legacy by Cherie Howie. The article highlighted two famous NZ'ers connected to this scheme - Sir Peter Jackson (who's parents came) and Roger Hall who himself came to the country in 1958.

"Between 1947 and 1975, a total of 77,000 women, children and men arrived from Great Britain under the assisted immigration scheme. Smaller numbers came from the Netherlands and some other European countries. Non-British immigrants in particular introduced new customs, foods, ideas and practices, and together with later arrivals helped shape modern New Zealand society."Source: New Zealand History

Thames has a strong connection to this immigration scheme, as many immigrants came to the town in the early 1950s, the men destined to work at A & G Price Foundry. The men were loyal, long serving employees at the foundry, and their families involved in the community.

This weekend genealogy site ancestry.au is providing free access to immigration records, and the Herald article highlighted that the names of the immigrants could be searched and the passenger details could be seen The key record source being: UK Outward Passenger List 1890-1960.

I have tested this out, with some names that I know who were part of the scheme and parts of their passenger records are below.

ABOVE: the heading on the passenger lists pages, this one is for the Atlantis that came to New Zealand in 1951.

ABOVE: snip of the record for a family that came to Thames. This man came as a 'fitter' to work at the foundry under the 'Ten Pound Pom' scheme.

Many of the first families that came to Thames were initially accommodated in the old Royal Hotel that was purchased by Price's and converted into apartments. There were houses later built around Prices Avenue Tararu, which housed many foundry families over the decades.

The 1950s were a busy time for the foundry. "By 1954 the total productive area was 100,000 square feet making the Thames plant one of the largest engineering works in New Zealand. It then comprised a machine shop, fitting shop, a locomotive and erection shop, a steel foundry, grader assembly shop, pattern shop and blacksmith/s shop." Page 46 Men of Steel by C W Vennell

So, whether your family came to Thames as part of the immigrant scheme to work at places like the foundry, or maybe they came independently - take a moment to search the resources available at ancestry. Especially during the free offer times, or at your local library. 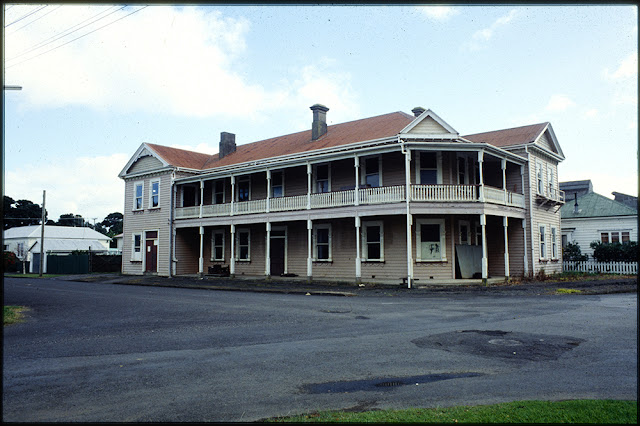 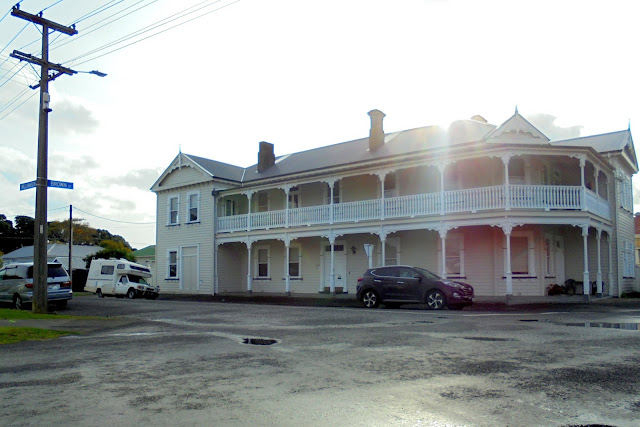 Latest view of the old Royal Hotel and A & G Price Boarding house & Storage area 2019
Now a Private residence. Apologies for the sun being exactly at the wrong angle!
Posted by Althea at 3:42 PM